The provincial government of Cádiz is one of the best examples of Andalusia’s MOAD platform, a collaborative project to implement open government services and infrastructure and expand the reach of open government. MOAD in Cádiz serves two goals. The first is to create a massive local administration portal, with emphasis on local government transparency and open datasets. The second is to spread MOAD throughout Cádiz by providing assessment and tech support services to other city councils in the municipality.

MOAD - Objective Model for Digital Town Council Administration, Modelo Objetivo de Ayuntamiento Digital - is funded and developed at regional level. But it has been created for use in the public sector at local level, including in Spain’s Provincial Governments (Diputaciones), such as Cádiz and Jaén. The platform is intended to unify and homogenise the digital activities and data services required for local citizenship, and thus it serves as a balancing factor to cut costs in public-sector budgets.

MOAD was created by the regional government of Andalusia not just as a starting point for local e-government and transparency services, but also as a way to create something that could evolve and spread through collaboration between different city council administrations. When a new organisation is interested in installing MOAD, instead of just receiving code and support from the regional administration, help will also come from other organisations nearby. For example, the city council of Cádiz has already reached out to help the local governments of Grazalema, Bornos and many more.

More than a successful case

The MOAD platform is installed in several local administrations, where it provides services to almost three million people in Andalusia. This e-administration initiative is effective in Provincial Governments and other local public offices of more than 300 Andalusian towns.

Cádiz itself is also a good example of the implementation of MOAD. The provincial government of Cádiz is expanding its own open government portal, which is also accessible from the main local government portal dipucadiz (“Diputación de Cádiz”). The integration between the two portals has even gone so far as to blend both projects under the name dipucadiz. Under the dipucadiz umbrella, general users and technical staff alike can take advantage of full transparency to investigate the complete range of local services. By fulfilling all the legal duties set out by Spain’s various national and regional transparency acts, the portal aims to facilitate public participation in the decision-making process in a clear and organised manner. 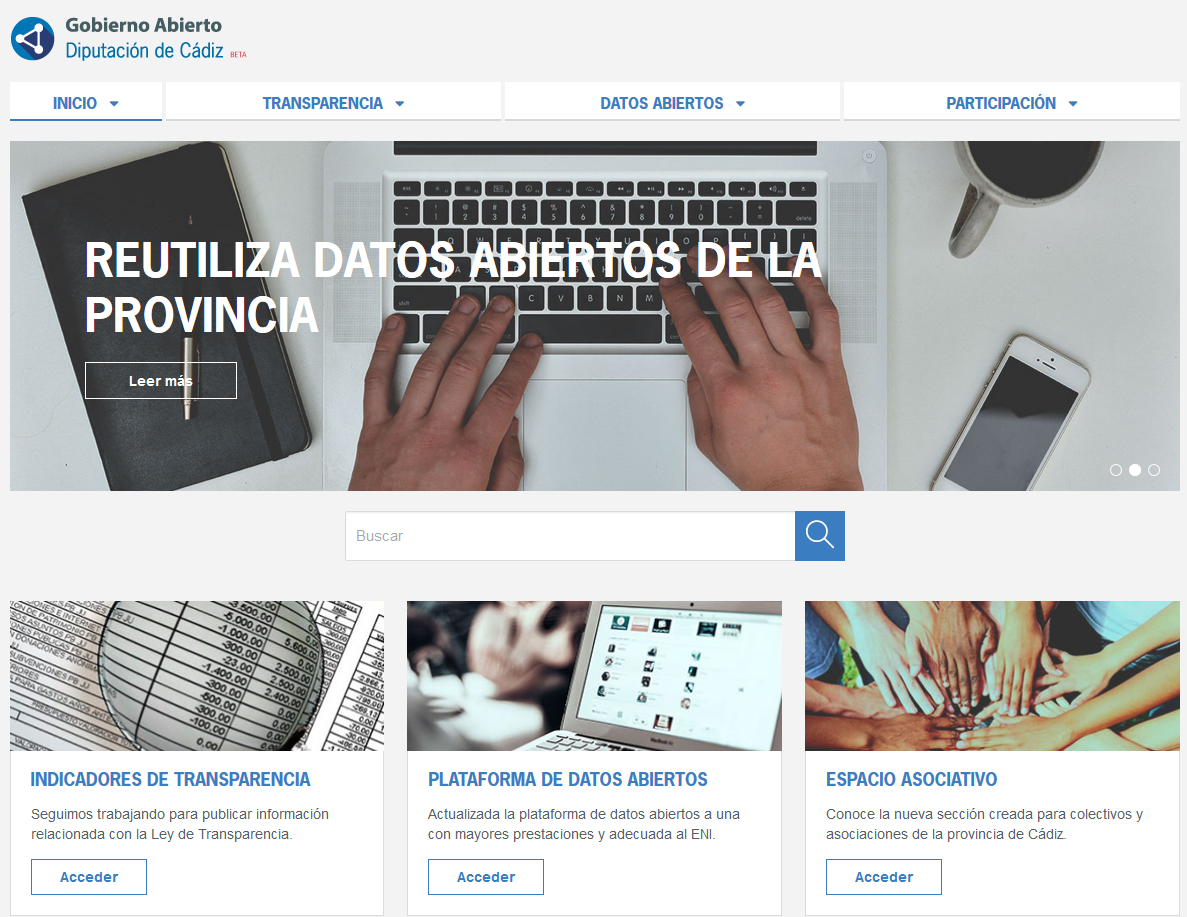 The MOAD platform behind dipucadiz, currently version H (“MOADH”) allows users to visualise and download data. It also offers developers the technical functionality they need to dig down to the origins of this data. As a result, the platform will support new linked services with data updated in real time. Dipucadiz has added innovations such as an international cooperation and aid section, and a cellphone app to reduce domestic violence.

The Code for Good Public Governance, established by Spanish Law 19/2013 on State Transparency, already applies to dipucadiz’s open government portal. The provincial government of Cádiz has been committed to implementing the whole text of this law since December 2015. The portal also complies with regional Law 1/2014 on public transparency in Andalusia.

The datasets in the data portal follow the national regulations on reuse of public sector information (RISP), and the technical standard on interoperability (NTI).

Dipucadiz offers all the tools necessary to create local administration portals for any city council in the municipality of Cádiz. Any local government can use these tools to meet its commitments to active publicity, to publish the datasets needed to ensure public transparency, and to release data that can be reused by public or private entities. Dipucadiz also offers tech support.

According to local sources, MOADH is the MOAD version that best fits the needs of local government in Cádiz. To minimise the chance of errors in this release, MOADH was tested extensively from summer 2016 until the end of the year.

When contacted by an interested municipality in the Cádiz region, the IT department behind dipucadiz (EPICSA) usually writes a list of requirements and schedules a demo session to showcase the tools. After this “show and tell” session, the work needed to adapt the platform to the needs of the new client continues in the offices of dipucadiz. When the software is ready, a technical support crew from dipucadiz leads a series of training sessions in a mobile classroom. Then, after the build-up phase and an intensive testing period, the production environment finally starts. The local government of Benalup-Casas Viejas is already running MOADH in a production environment, while El Bosque and Jimena de la Frontera are starting the adaptation work.

Public IT departments working together

All the technical work is carried out by EPICSA, a company created by the provincial government. Other organisations – such as the local Information Society Service – are involved in developing and expanding custom installations of MOADH in local administrations of Cádiz

Every town hall is offered a transparency portal just like the one provided by the dipucadiz open government portal, based on the code of local good practice. The transparency portal includes a financial disclosure section in which local representatives can share information on their assets before and after taking office.

MOAD was developed to integrate with local ERPs, such as OpenLocal. But unlike other installations of MOAD across Andalusia, the MOADH version used in dipucadiz is not integrated with Open Local. Instead, dipucadiz uses tools developed in-house and by other local administrations, such as the local police department and Seville’s INPRO. All these tools are open source, so they can be installed and shared with no major difficulty or cost. And the data stored can be shared with other MOAD platforms using OpenLocal ERPs.

The source code of Dipucadiz’s open data portal is based on CKAN, with a presentation and data display layer based on WordPress. It is also equipped with RTOD technology for automatic data collection from other institutional systems and backends.

Before adapting MOADH to a local government framework, EPICSA usually installs other tools such as the digital signature client Portafirm@. Cádiz’s local offices have used Portafirm@ since 2007, with one million documents registered and signed. If required, EPICSA also provides a dedicated application for official decrees, also using open source software and installed in the Cádiz municipal offices since 2008. This application also offers updates on official notifications, transfers and certifications.

Dipucadiz is currently starting to implement another in-house tool for development, called valij@, to improve the internal transfer of official documents. Valij@ is also meant to be integrated with Portafirm@, so both applications share the same register list for queries and results.

For registry purposes, dipucadiz has recently dropped the proprietary software solutions used by former local administrations. A new tool called Registro, based on open source code, is already the official registry solution in the provincial government and also in offices across the Cadiz municipality.

The data managed by MOAD interconnects with various external systems and platforms in Andalusian local administrations. Some examples are OpenLocal in Jaén’s Provincial Government; ACCEDE in the same office but in the town of Granada, where it has a similar level of integration that of OpenLocal; SIDERAL for registration procedures; and E-PADRON/DECRETA for official resolutions, notifications and communications in the Provincial Governments of Sevilla and Huelva. The MOAD services will also soon be connected to the national Tablón Edictal Único, a centralised digital board for Spain’s official state gazette (the BOE, Boletín Oficial del Estado). Dipucadiz generates a RDF/XML file to achieve optimal integration with national and continental open data portals. The platform also generates a DCAT Application Profile to describe public datasets which can be integrated with other platforms in Europe.

MOADH is currently installed in the local governments of Espera, Algodonales, Bornos, and Grazalema, where more than 1,500 official electronic documents have been already registered in the platform’s first month of use. Although MOADH is offered with its own suite of 114 procedures, the final installation is different in every local office because it is adapted to the needs of each city council.

At this time, 17 local governments in Cádiz have already adopted the dipucadiz installation of MOADH, and more are on the way.

Dipucadiz’s framework is integrated with some national tools and platforms, such as Red SARA, the virtual registry office, ORVE, and PLACE, which is used when new staff are hired.

The open data section of dipucadiz offers datasets relevant to public transparency, such as local budgets. Users can also find raw data that can be reused to create apps and services with added value. Anyone can reuse information on tourism, urban planning, local infrastructure, environment, sports facilities and road networks, with more categories to come. As of now, dipucadiz’s open data portal has 113 datasets.

One interesting application is the Participation area of the portal. This brings together all the participative initiatives run by the provincial government, with tools that allow users to submit ideas to improve local activities and also the performance of the portal itself. This section also includes the apps made with the reused data, and the latest requests for open data made by citizens.

In February, dipucadiz’s open data portal was awarded the CNIS 2017 prize for best open government project. It was chosen from a list of almost 70 projects presented by 38 public institutions.

Also in CNIS 2017, the provincial government of Cádiz introduced the ANTICÍPATE app, which also won the first prize for social innovation. This is a multidisciplinary project, as other local areas have worked with EPICSA to build the app. ANTICÍPATE is a multi-entity and multi-language mobile app to prevent and reduce domestic violence in Cádiz. Among its many functionalities, the app has a lot of information about specialised services to help victims of domestic violence. The app has been developed with Liferay 6.2 GA 6 and uses ORACLE 11g as its database manager.

One of the most successful sub-portals of dipucadiz is one dedicated to international cooperation. This carries information and links to local initiatives on human rights, gender equality, and development cooperation. This sub-portal showcases projects promoted by various local associations and by the provincial government of Cádiz. The Cádiz region has strong links to Morocco, and an example of the projects promoted on dipucadiz is Proyecto Asadaka, which addresses social problems in Tangier.

The open data catalogue can be accessed through datos.gob.es, the national open data initiative. And all local datasets are published under the Spain's license for reuse of public data. Dipucadiz datasets are also integrated with the European Open Data portal and other local data sources and systems, such as IDECádiz, the Spatial Data Infrastructure.

Representatives of dipucadiz believe the portal has created the technical foundation necessary for participative government, removing physical and time barriers to the sharing of public information and making it easier to provide useful insights.

In addition to the open datasets already available in dipucadiz, there is a firm commitment to publish more data that is relevant to citizens. The goal is to centralise all the many sources of local government data and make it available for reuse. And, of course, to create more and more local office installations of this open data and transparency platform across the towns of Cádiz.