Decide Madrid, the eParticipation and transparency portal for the Spanish capital’s City Council, has already achieved many of its strategic targets. Looking beyond Madrid, the open nature of the platform - based on the Ruby on Rails language - and the promoters’ commitment to sharing have led to more deployments by many other local governments in Spain. Decide Madrid has even attracted the attention of some organisations from abroad.

Spanish Law 19/2013 regarding Transparency, Access to Public Information and Good Government was created to enforce transparency in public sector activities, and applies to all public administrations. More and more regional and local governments are also implementing their own transparency and citizen participation acts. These include Comunitat Valenciana’s Law 2/2015 on Transparency, Good Government and Citizen Participation, which was last updated in May 2016. Comunidad de Madrid also has a proposed bill on Transparency and Citizen Participation, which is currently still being discussed.

The code of Decide Madrid is already running in the city councils of Barcelona, Oviedo, A Coruña, Valencia, and Calvià in Majorca. Some other municipalities, including Fuenlabrada and Cádiz, are also keen to adopt the platform. According to official sources, more than a dozen administrations are already installing the Consul framework used by Decide Madrid. Even the city of Nariño, in Colombia, has expressed interest in this eParticipation and transparency solution. In Spain, some larger administrations, such as provincial governments in Valencia and Gran Canaria, will provide their own versions of the platform to hundreds of city councils before the end of 2016.

In each of these portals, one of the main modules is the section on local budget participation. The city councils are open to proposals from their citizens on how to spend parts, or the whole, of their local budgets. The aims and nature of the open budget section give an idea of how many target groups can be involved in the decision-making process. 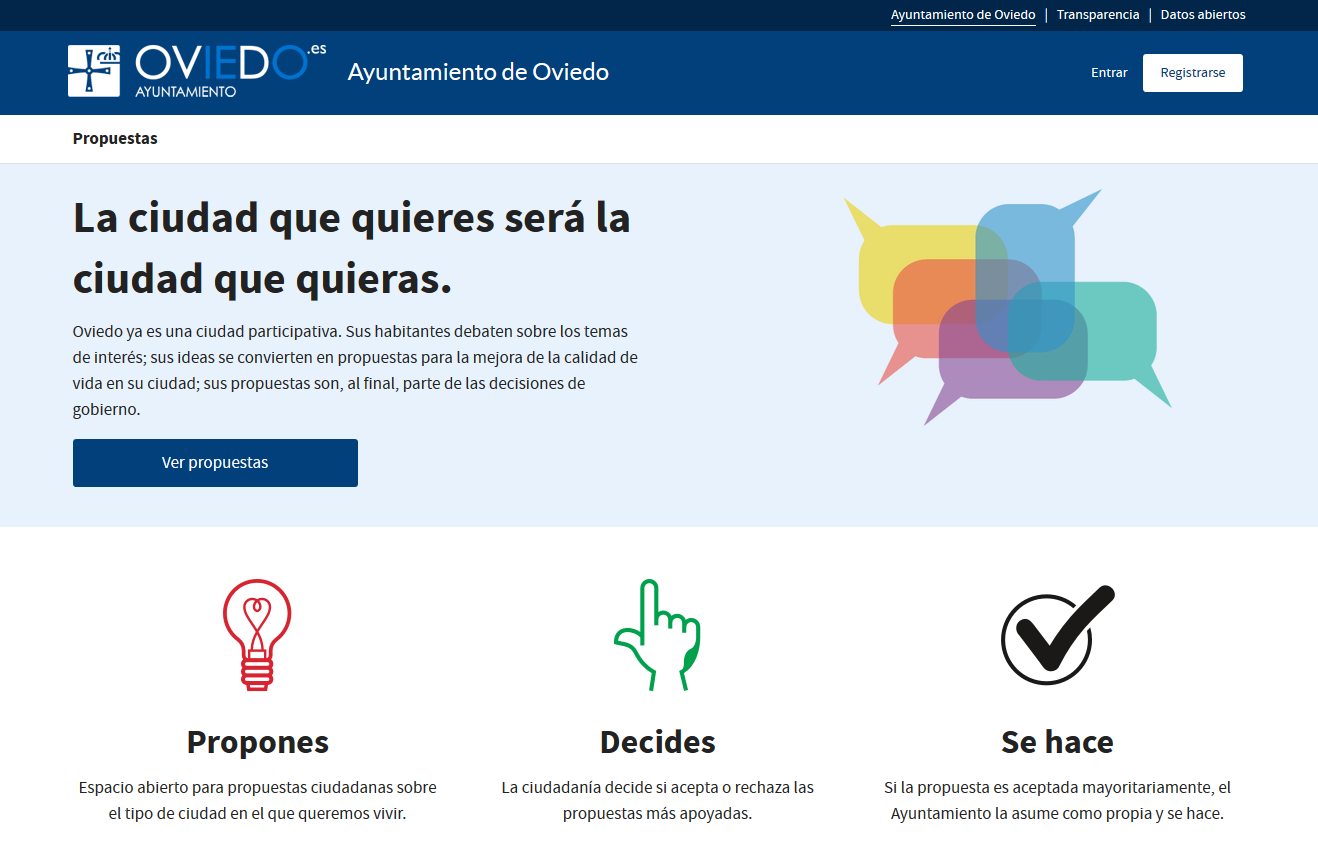 The levels of participation in Decide Madrid, meanwhile, are growing in a timely fashion as new participation processes are opened. In a project to remodel the city’s Plaza de España, for instance, 26,961 citizens involved themselves by making proposals. The participative budgets project attracted 45,522 people. In the first year of Decide Madrid, the portal gained 184,128 registered users.

Once a city council has decided to create its own eParticipation portal using the Decide Madrid code, the process is fast and organic. Any local government can contact Decide Madrid’s workgroup, known as the Institutional Extension Service, to start the joint project. Their Madrid colleagues give all kinds of support to create and maintain the necessary adaptations to the eParticipation portal. Technical, organisational and even legal help can be obtained through this collaborative process. As Decide Madrid sources explain, a local office can start working with a programmer who uses Ruby on Rails and Github to adapt the platform from the original framework.

Deciding what needs to be adapted involves several key steps, according to the Institutional Extension Service. Obvious things to be changed or added include census information, local languages, and the city logo. The most important decisions, however, concern the structure of the portal, which is based on the strategy of the city council in question. These decisions govern the size of the portal and the number of things citizens can use it for. In A Coruña, for example, A Porta Aberta started with the participative budgets module, but has not yet implemented the advanced open budgets display or the transparency portal.

In the case of A Coruña, the Councillorship of Participation and Democratic Innovation created an internal, multidisciplinary workgroup involving many local areas. Its task is to validate and report on the viability of the citizens’ proposals.

In general, Decide Madrid offers help in terms of functionality and technical support. Given the easy-to-use philosophy of the framework, every portal works as an autonomous entity. But the contact between Decide Madrid and the individual administrations is maintained over time, so that the roadmap for the software can be coordinated. This avoids information overlap and duplication of work, and reduces the need to learn new functionalities.

In Calvià, the city council has created a Transfer Service for Participation Technologies to allow other local administrations in the Balearic Islands to take advantage of this technology in a short time.

In A Porta Aberta, the Decide Madrid code was altered to fit the City Council’s existing IT framework, connecting to geographic databases and other information on the city’s districts, and systems for validating users. In this particular case, the platform itself has required no significant modifications, since it has adjusted to the needs of local management processes without any issues.

A Porta Aberta - A Coruña’s platform - started as a pilot project - which covered the whole city -  with the aim of creating a proposal for a EUR 1,000,000 budget in the 2017 fiscal year. Since its launch on 26 May, the portal has gained 2,693 registered users who have submitted 516 proposals. These proposals for how the city budget should be allocated in turn have received 12,433 backing votes in the portal. 98 of the proposals – with a total of 6,905 votes - have had enough votes to be implemented, once their viability had been demonstrated in both technical and economical terms.

Decide Madrid and the other portals are based on the principle of one person, one vote, so the platform interface has been designed to be direct and individual. Decide Madrid is currently running two big participative projects: one on the remodelling of Plaza de España, and the other on a proposal for a single ticket for all public transport. If either of these proposals receives the support of 1% of the city’s population, it wins the chance to be tabled in local plenary sessions.

Decide Madrid has achieved its main goals: citizen proposals, participative budgets, and collaborative legislation. There is room for improvement and consolidation, however, and for raising the levels of participation and collective intelligence throughout the decision-making processes.

Decidim Barcelona, which has been operational since February 2016, is the online tool of the Catalan capital’s Local Plan 2016-19. Decidim Barcelona has collected 10,860 proposals from citizens, of which 8,142 have been accepted and translated into 1,467 local government actions. The Local Plan is an ambitious programme, with short-, medium- and long-term actions, that relies on a participative process through both online interaction and face-to-face meetings. Any citizen over 16 can take part in the proposals or start a debate in the portal. Any entity or association can email the City Council at participacio@bcn.cat to receive a kit allowing it to start a discussion.

The Oviedo version of the eParticipation portal, which started in December 2015, is another example that is mostly dedicated to participative budgets. In this case users discover a massive but useful management and participation tool, containing lots of general information, before they reach the sections reserved for debates and proposals. Any proposal has to gain 500 votes before it can move on to the next phase. The portal is also being used as a source of local information for new projects. An example is ‘Diseña Santuyano’, in which collaborative workshops help citizens to come up with ideas for better urban living.

Decide Madrid has recently entered the Sharing and Reuse Awards Contest, which evaluates IT solutions created and promoted by public administrations. The Institutional Extension Service holds events to show off the benefits of Decide Madrid and its open source platform to any administration that is interested.

Recently, a pilot project was started by the council offices of four cities: A Coruña, Madrid, Santiago de Compostela and Zaragoza. Through this project, all the software and APIs that these cities have developed in the areas of transparency, citizen participation and open data will be available to any other administration. Some citizens and private companies have also expressed interest in reusing the code and data from these portals, so a GitHub repository is a must. In some cases the Consul software will also be hosted on CKAN, which is the solution some of the portals use for open data.

There is a bidirectional flow of information and learning between Decide Madrid and the new portals springing up all over Spain. On one hand, other local governments get all the help they need, in both technical and legal terms, to implement their own eParticipation portals using code and support from Decide Madrid. On the other hand, the strategic needs of every new implementation, and the ways in which these needs are met, allow Decide Madrid to keep improving. For example, although Decide Madrid already supports two languages – Spanish and English - other portals must offer more official languages. This gives Decide Madrid clues that are helpful in creating newer versions of its own portal, and for further installations in other local offices. Development is both a reactive and a proactive process.

More implementations are coming, plus upgrades that make the service more attractive to users - such as the mobile phone version A Coruña is using to expand the channels available for participation. It is clear that Decide Madrid has already created a legacy for transparency and citizen participation.