The aim of this paper is to outline the software development strategies and its underlying technical solutions used to develop e-government gateway services for its citizens and Turkey’s governmental agencies. Since 2012 there have been numerous documented academic papers about e-Government Gateway with the emphasis on its non-technical operations. This document covers the technical document aspect of our current status of e-Government Gateway Software Process additionally this article will explain the current status of software development process in academic manner.

e-Government Gateway is a platform that enables a one-stop-shop and single authentication for the sole purpose of providing public services to citizens, businesses and government agencies via information and communication technologies. Officially launched on December 18th of 2008, e-Government Gateway currently has 21.460.136 active users providing 1083 services with the collaboration of 151 agencies as of April 15th of 2015.

The aim of the e-Government Gateway software systems is to meet the needs of its citizens through a joint effort of various government agencies while providing twenty four hour operations with convenience, decreased costs and time savings. The below table shows usage statistics on the services provided by e-Government gateway:

Table 1: Usage distribution of services provided via e-Government Gateway platform channels as of April 15th of 2015

First; the Waterfall model is one of the oldest models and widely used in government projects and in many major companies. This model emphasizes planning in early stages; it ensures early detection design flaws before the development stage (Sommerville, 2004). However in the Waterfall model, returning to an earlier phase involves costly rework. Each completed phase requires formal review and extensive documentation development. In each stage, documents must explain the objectives and describe the requirements for that phase. Because of this costly rework and continuous documentation reasons the Waterfall model is not preferred for e-Government Gateway project (Medeni & Ünsal & Ayas & Medeni, 2011).

Secondly; Agile programming is an approach, based on the development and delivery of small increments in functionality. On the Agile project, every member of the project team has the opportunity to know how the project is going at any given time. Daily scrum meetings, sprint reviews, and visible progress charts offer concrete ways to see progress (Osorio & Chaudron & Heijstek, 2011).

During e-Government Gateway software development phase Kanban and Scrum methods are used. In Scrum method time is divided into short work cadences, known as sprints, typically one week or two weeks long. The product is kept in a potentially shippable (properly integrated and tested) state at all times. At the end of each sprint, stakeholders and team members meet to see a demonstrated potentially shippable product increment and plan its next steps.

In Scrum method urgent issues can only be added to the product backlog and product owner can put this into next sprint. During development of e-government gateway software important issues should wait for this reason.

For these reasons we had to change software development methodology. Kanban method focuses on continuous delivery and drives high efficiency by limiting how much work can be done at once. Kanban method includes more open options; the only constraints are visualizing your workflow and limiting the work in progress. 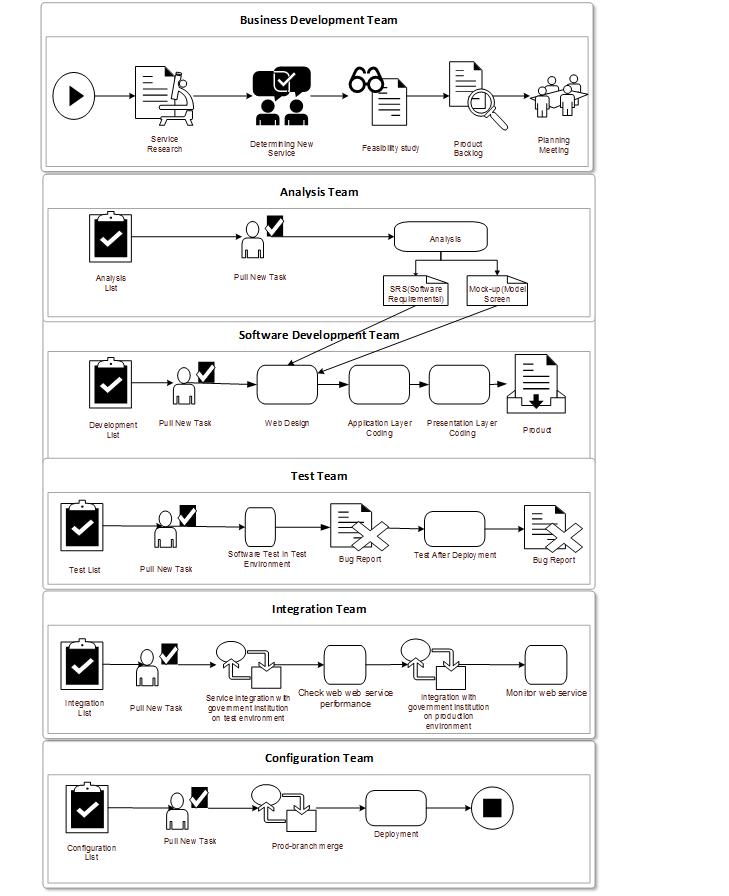 Software team consists of nine members. Software team starts off the day with twenty-minute daily meeting. The purpose of this meeting is to ensure coordination within the group. When the team members are ready to start on the new task, he/she takes the most critical task from Kanban board. This prevents people from feeling overloaded and forces teams to prioritize. Ultimately this equates to project managers and team members focusing on the right tasks at the right times while reducing wasted time or effort.

iii.  Test Team: After software coding has been completed, the code or application is then delivered to Test Team who then performs the testing in accordance with control criteria through the use of software requirement specifications and mock user interface. Test Control Criteria contains web page usability, screen layout standards, software performance tests. Integration tests with customers are performed the findings are delivered to software development and analysis teams. After installation, software is tested on live system and validated for use.

v.  Configuration Team: The new software component is sent to the configuration manager for deployment within the live environment.

The services represent reusable business functionality; through standard interfaces, service consumers compose applications or systems using those services (Dennis, Smith, Kontogiannis, 2010). By using Service Oriented Architecture application business services can be freely designed. The business logic is centralized in one location, as opposed to being distributed across embedded multiple services.

Varying government agencies have implemented different hardware and software systems in their distributed structures. Service oriented software architecture enables the interaction among these heterogeneous structures and provides flexible, loosely coupled systems. This type of architecture simplifies integration of the e-Government Gateway software within the government agency services. By using Service Oriented Architecture changes on these services ultimately do not affect other parts. Only affected services are tested and changes can be deployed quickly.

For management of services we use enterprise service bus tool. An Enterprise Service Bus (ESB) is a software architecture for middleware that provides fundamental services for more complex architectures (Channabasavaiah & Holley & Tuggle, 2003). For example, an ESB incorporates the features required to implement a service-oriented architecture (SOA). In a general sense, an ESB can be thought of as a mechanism that manages access to applications and services to represent a single and consistent interface to end-users via web or forms-based client-side front ends. ESB enables services to communicate over different protocols and different message formats. Also it enables virtualization of services for loose coupling. Messages can be easily routed, and easily logged. Also ESB enforces and manages security centrally, including authentication, authorization (Siddiqui & Abdullah & Khan & Alghathbar, 2011).

Continuous Integration is a software development practice where members of a team integrate their work frequently; usually each person integrates at least daily leading to multiple integrations per day (Fowler, 2006). Using this practice, problems which are related with integration is minimized. Thus, bugs can be found and solved easily in the early phases. Software source code analysis and conformity with the coding standards can be tracked easily. Developers can implement deployment frequently by the ease of continuous integration.  The following steps are applied in the continuous integration phase of e-Government Gateway software:

Servers in the e-Government Gateway architecture are as following;

d. Enterprise Service Bus Server:  This server allows communication via a common communication bus that consists of a variety of point-to-point connections between providers and users of services.

e. Database Server: User information and service usage logs are located in this server. Personal data is not hold in e-government gateway system, only identification number and password hash data of users are located on this server.

g. Cache Server: In e-government gateway system active data is often cached to shorten data access times and reduce latency. This data is shared among all applications and hold in this server.

Every day, millions of people perform transaction using e-Government Gateway system. They search their private information bearing in mind that it is reliable and can be trusted upon and the operation they perform is secured. It is important to provide security in such a system. Security controls starts in software development process, using continuous integration process; errors, vulnerabilities and compliance with the security standards are automatically reported and monitored.

Periodically, e-Government Gateway project penetration test is done by an independent company. According to results of tests; system vulnerability and security leaks are reported. These findings are resolved by system and software development team. Using Secure Software Development Life Cycle takes certain amount of time but becomes profitable in the long term: "it is much cheaper to prevent than to repair" (McGraw, 2006).

Encryption techniques are used for information security during software development phase. For example user passwords are encrypted before storing in database. Software developers are not allowed to access the live data. Development and production environments are separated for security reasons. Test team cannot use live data. Test data is cleaned up from personal data and only dirty data can be used in development environment.

e-Government Gateway caters to the four basic disability group’s needs (Visual, auditory, physical and mental). E-Government Gateway software is designed by considering some design rules: take less time to accomplish a particular task, easier to learn, more satisfying to use. Usability tests are carried out in collaboration with universities. These tests are made in accordance to EN ISO 9241-151, TIS 194- ISO / IEC 40500 : 2012 ( WCAG ) standards.

Other important topics under G2C model provided by e-Government Gateway are as following:

i. Acknowledgment: The purpose of this service is to acknowledge E-Government Gateway users by SMS, email, gateway inbox and instant notices sent from mobile application. Thanks to this service infrastructure, users can get acknowledgment from all government or business institutions from single point.

Other important topic under G2G model provided by e-Government Gateway is as following:

i.  Single sign on (SSO): Enables all users of the e-Government Gateway to directly access applications of other government agencies that require identity authentication with one password and without additional authentication. By this way citizens can securely access all public services with a single password management.

As all systems have, e-Government Gateway software has development areas. One of the issue is test-driven software development methodology. The software developer writes an automated test case that defines a desired improvement or new function, then produces the minimum amount of code to pass that test, and finally refactors the new code to acceptable standards (Beck, 2002).

e-Government Gateway plans to increase the usage capacity and number of users, by keeping up with evolving technology. In this respect, e-Government Gateway mobile application is currently being developed. Application development on new technologies, such as smart wearable products, is planned for future work.

We thank all contributing people who worked at e-Government Gateway and Information Society Team for their complimentary efforts.