ePolicy was an FP7 project that focused on regional planning and promoted the assessment of economic, social and environmental impacts during the policy-making process, at both the global and individual levels. For the latter, ePolicy aimed to calculate social impacts through opinion mining of e-participation data extracted from the web. To aid policy makers, citizens and stakeholders, ePolicy relied heavily on visualisation tools providing easy access to data, impacts and political choices.

All the technical work packages were converged into a flexible open-source architecture.

The techniques used were general and could be applied at different political levels: regional, provincial, urban planning, and both public and private projects. 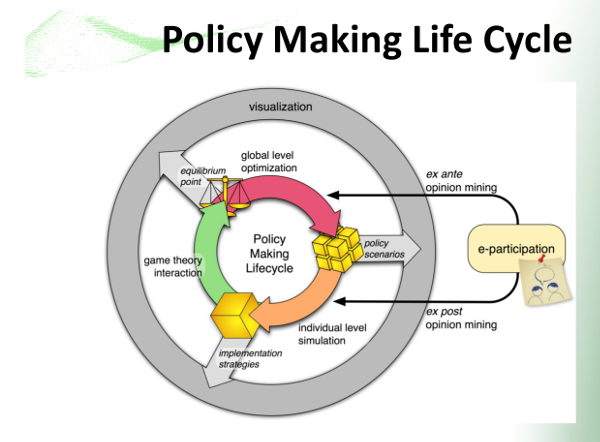 ePolicy was an FP7 STREP project partially funded by the European Commission under the ICT theme, Objective 5.6 ICT Solutions for Governance and Policy Modelling. It aimed to support policy makers in their decision-making processes through a multi-disciplinary effort to engineer the policy-making life cycle.

The ePolicy project ran from October 2011 to September 2014. The consortium consisted of research institutes from Italy, Ireland, Germany, the UK and Portugal. Three implementation partners from Italy were responsible for disseminating the research outcomes. They validated the system using the Regional Energy Plan (REP) of the Italian Region of Emilia-Romagna. as a test project. 2.6 million Euro of the total budget of 3.3 million was funded by the European Commission.

The ePolicy project aimed to:

The expected direct outcomes of the project were:

The expected social and economical benefits of the project were:

The ePolicy project focused on regional planning. It promoted the assessment of economic, social and environmental impacts during the policy-making process, at both the global and individual levels. For the individual aspects, ePolicy aimed to derive social impacts through opinion mining of e-participation data extracted from the web. To aid policy makers, citizens and stakeholders, ePolicy relied heavily on visualisation tools providing easy access to data, impacts and political choices.

The enabling technologies were: 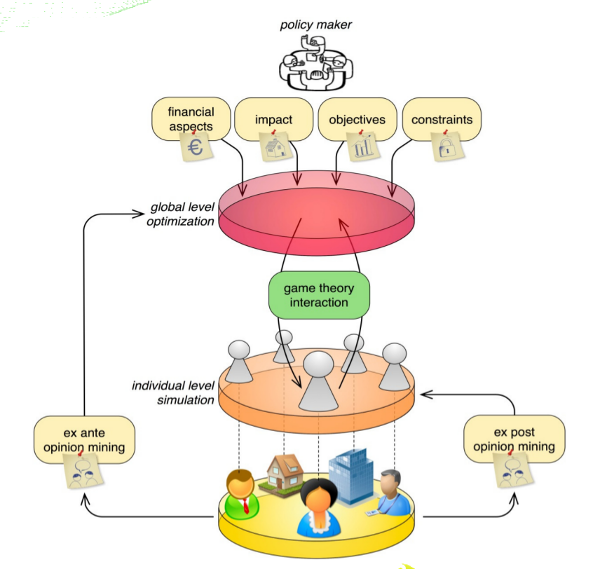 A number of underlying technologies were required to create an open, transparent and accountable tool:

All the technical work packages were merged into a flexible open-source architecture.

The policy model in the ePolicy system is a multi-criteria combinatorial optimisation problem, says Michela Milano, Professor at the University of Bologna. For instance, in the field of energy politics it might be used to merge environmental impacts and constraints, territory-based constraints, existing energy plants and generated power, and the budget of the public agency. The model produces a set of alternative scenarios, based around shares of different energy sources and energy efficiency measures in a future enrgy mix, together with the Strategic Environmental Assessment for each of these choices.

The agent-based simulation is a model that captures the behaviour of classes of citizens (clustered according to age, education, gender, number of family members, income and environmental sensitivity). Putting together agents and making them interact, one can observe an emerging social behaviour that can be interpreted as the social reaction to specific policy instruments.

For example, if you provide incentives for the production of energy from renewable sources, you can simulate how many people will actually adopt this technology, and that way assess the impact on the energy market.

Finally, the somewhat conflicting interests of the region on the one hand and the individual on the other are handled using a game-theoretical approach. So the two components representing these interests, namely the simulator and the optimisation component, have to reach a compromise — an equilibrium in which both goals are satisfied as well as possible. This is accomplished through a series of interactions between the two components.

Opinion mining is one of the components of the ePolicy Decision Support System (DSS), says Luís Torgo, Associate Professor at the Department of Computer Science of the University of Porto, and lead developer of the opinion mining component. The main goal of this component is to provide policy makers with an overview of how citizens feel about certain topics related to the decision domain.

While the outcome of this module was initially planned to be used as input to the optimisation modules, the consortium has changed its role as a result of the research carried out during the project. In effect, it was decided that the outcome of this module was more useful as a 'side source' of information that could be directly consulted by policy makers. It allows them to adjust their decisions based on various aspects of the alternative policies that were fed into the other components of the ePolicy system.

In the specific context of this project, the main goal of the opinion mining module was to provide information on trends in public sentiment regarding various aspects related to energy policies. This information is automatically inferred by the module from the interaction of citizens in a predefined list of e-participation forums.

The opinion mining module is an integral part of the ePolicy system, but it can also be used as a stand-alone solution in other application domains.

The interactions between the main system and the opinion mining component are twofold, Milano adds. First, the component interacts with the visualisation tools as opinions are visualised and aggregated at various granularities. Second, the components' aggregated output is used in the decision support system as a representation of the public sentiment toward a particular policy-making choice.

The proposed techniques are general and can be applied at different political levels, such as regional, provincial, urban planning, and both public and private projects. In the first instance, however, the ePolicy project focused on regional planning in the Emilia-Romagna Region of Italy, whose Regional Energy Plan (REP) served as the case study.

The case study aimed to provide a tool to support regional planners in creating an energy plan in line with strategic EU and national objectives, and consistent with financial and territorial constraints. The plan was to include the results of opinion mining. It was to be well assessed from an environmental perspective, and optimal with respect to one or more metrics.

In addition to the regional plan, ePolicy aimed to provide a portfolio of implementation instruments (fiscal incentives, tax exemptions and investment grants) to push the energy market, and society in general, in the direction envisaged by the plan.

The system helps policy makers by suggesting alternative policy plans, assessing their environmental sustainability, and proposing corresponding implementation instruments, says Milano. In addition, the plans are visualised together with the sentiments learned from recent discussions on energy-related topics. This visualisation helps policy makers compare plans and get in touch with public opinion.

The ePolicy project has yielded a complete policy-making platform tailored to aiding policy makers in the field of renewable and sustainable energy, Milano continues. The platform has been used by the Emilia-Romagna Region during the project, by the Piemonte Region afterwards, and has been presented to a number of other government bodies.

Individual components have also been deployed. The module to optimise plans has been used by Sis-Ter, a consultancy company in Imola, to work on municipality plans. It has also been used by the Eulabor Institute, a non-profit in water sustainability development, to assess maritime policies and their environmental impact.

According to Milano, the ePolicy platform has — in general — improved the work of policy makers in three ways:

We have developed a methodology for exporting the results from ePolicy to other policy domains, says Milano. For example, we have applied the ePolicy system to the Regional Operational Program that allocates regional budgets in Italy. We are currently working on an application at municipal level, and in other areas such as maritime policies.

One important lesson learnt is the advantage of close integration between simulation and decision support, Milano says. That allows for simulated outcomes that are based on social behaviour and trends, as processed by the optimisation components. We recently published the paper 'Empirical decision model learning' on this topic in the journal 'Artificial Intelligence'.