Two years ago, the German federal government launched the portal 'Gut leben in Deutschland' ('Living well in Germany'). It is an (interactive) report on the Quality of Life (QOL) in Germany, providing information on a total of 46 indicators across twelve dimensions.

For each of the dimensions, the underlying indicators can be shown through diagrams that display the current state as well as its development over time. In addition, a textual and interactive report is provided for each of the dimensions, giving an extensive description of the current state of affairs, the history and context, and the direction the country is heading. 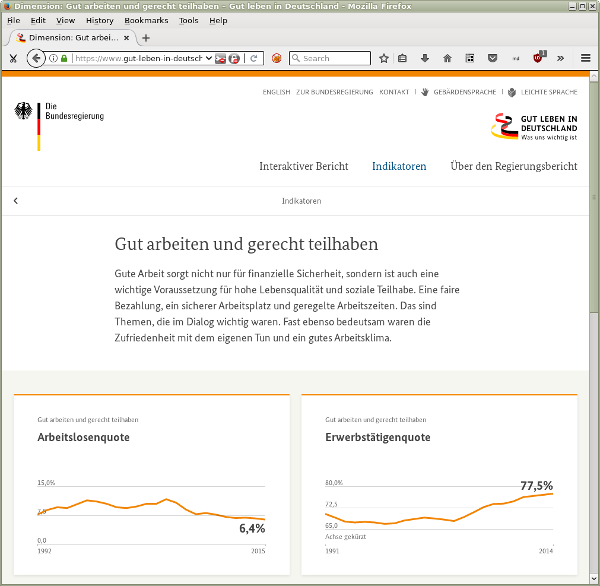 Making quality-of-life issues measurable and transparent in this way allows policy makers, citizens and other interested parties to check on the current state of affairs and trends, and receive feedback on the effects of new policies, measures and actions. This way, the indicators function as Key Performance Indicators (KPIs), that operationalise and quantify high-level strategic goals.

The current reporting and indicator platform provides an inventory of the quality of life in Germany. It can be used to identify the need for political actions, and to develop effective measures to maintain and improve the quality of life.

The project started with a public consultation to identify what is most important to the German people with regard to their personal lives. Between April and October 2015, 200 events were organised — 50 by the federal government and 150 by civil society — to find out what exactly citizens mean by a high quality of life. The events allowed 8,650 people were able to express their opinions in three-hour discussions.

Whether it is good work, health or family, friends and cohesion, we are looking to discuss what really matters. And we want to work this into our policies, Federal Minister Sigmar Gabriel said at the kick-off of the project.

At the same time, an online dialogue was started to allow all citizens to provide input on what they feel is important in their own lives and for the general quality of life in Germany. Another 4,600 people contributed to this inventory, so in total almost 16,000 people have participated in the dialogue.

The two main questions in the consultations were: What is important to you personally in life? and What do you think is the quality of life in Germany?.

Peace — both in their own country and abroad — turned out to be the most important issue for German citizens. Other important issues were adequate salaries, equal opportunities in the educational system, good access to health services, affordable housing, and conservation of nature.

Another major concern of the people was feeling safe in general: in their own houses, in the streets and on public transport, by day and by night. The results also showed that the global political situation influences people's sense of security.

With regard to migrants, refugees and integration, people expressed a wide range of opinions. These varied from hospitality and a wish for integration, via scepticism about the ability to influence integration processes, to concerns about the willingness of society to take in newcomers.

Finally, many people indicated that they found it difficult to reconcile a career with family life. More flexibility in childcare and working hours would help, they said.

According to an opinion piece published in the German newspaper 'Frankfurter Allgemeine Zeitung', this survey shows that politically important issues such as the environment, innovation and Europe play only minor roles in citizens' quality of life. The authors conclude by wondering whether the people's will can be politically decisive in these issues that have a long-term impact on the quality of life, yet do directly affect large sections of the population in their everyday lives.

All the input — comprising a total of 400 topics contributed by the participants — was aggregated with the help of independent scientists and translated into measurable indicators. The result is a list of 46 indicators, divided into three sections and twelve dimensions:

The list of indicators was officially accepted by the German federal administration and Cabinet in October 2016. In doing so, the administration acknowledged a statement in the coalition agreement that the values and aims of the German people will lead in the government's actions.

All data, graphics and information from the platform are publicly available (as open data) for re-use. The same is true for the platform itself: the software is published under the MIT Licence.