﻿MOAD, a regionally funded and developed platform to promote local e-administration in Andalucía

The Andalusian Regional Government (Junta de Andalucía) recently introduced seventh major version of MOAD, its Objective Model for Digital Town Council Administration (Modelo Objetivo de Ayuntamiento Digital). Although this initiative is funded and developed at regional level, it has been created for use in the public sector at local level, including in Spain’s Provincial Governments (Diputaciones). The platform is intended to unify and homogenise the digital activities and data services required for local citizenship, and thus it serves as a balancing factor to cut costs in public-sector budgets.

Right now, the MOAD platform is installed in several local administrations, where it provides services to 2.7 million people in Andalucía. This e-administration initiative is effective in Provincial Governments and other local public offices of more than 300 Andalusian towns, including the town of Jaén. In this latter the platform was used to sign almost 255,000 public documents in the Provincial Government last year. There is a visible evolution and growth in the use of the platform: in 2015 MOAD had 1,500 users, 400 more than in 2014. In terms of the number of public documents processed, in 2015 MOAD handled 20,000 more documents than in 2014, and 95,000 more than in 2011. 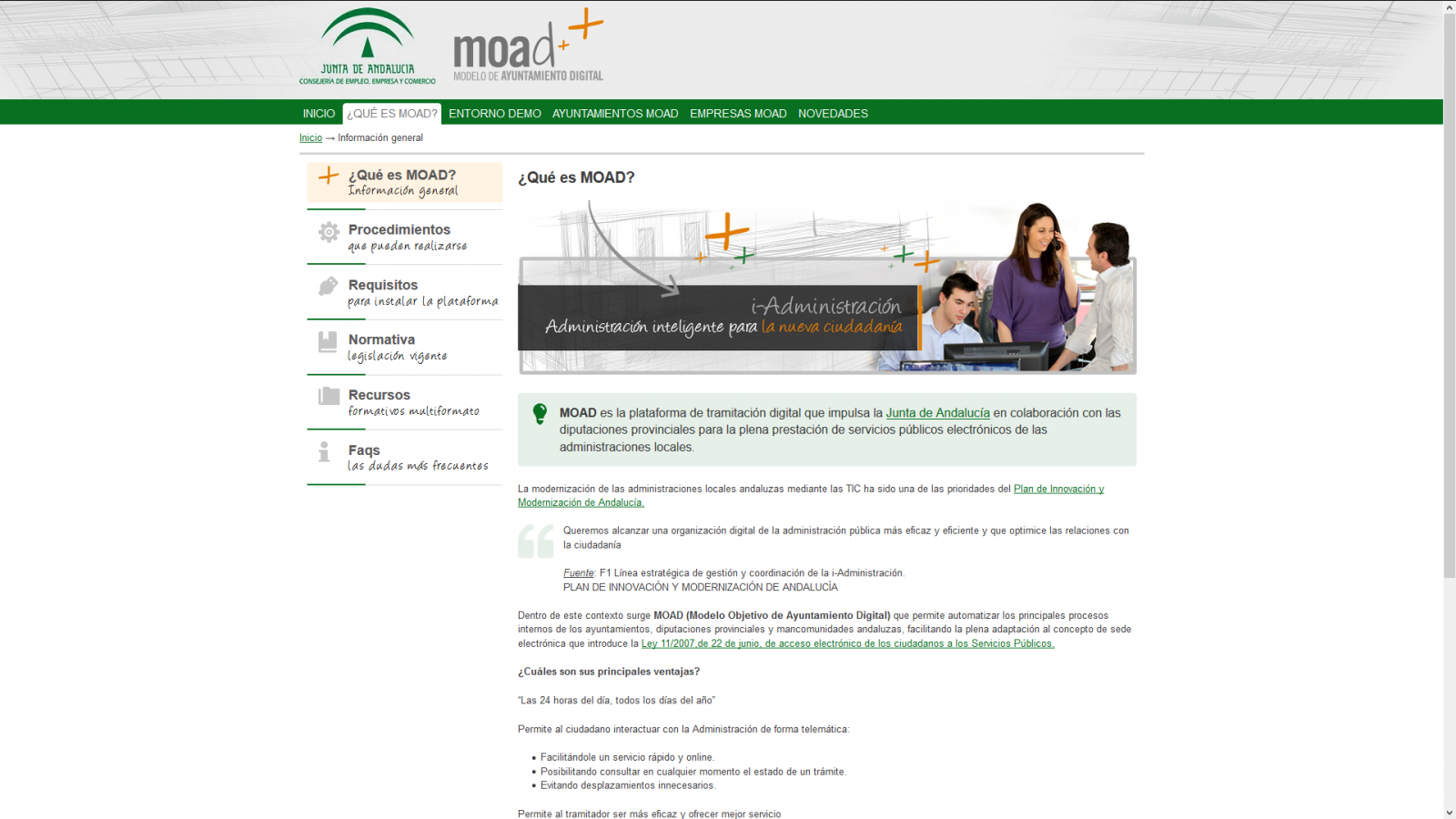 The latest stable version (2016), called MOAD_H, incorporates an assistant for self-guidance and training that is aimed at both the general public and public-sector staff. The authentication system is compatible with multiple devices, such as computers, mobile phones and tablets, with no dependence on particular operating systems, databases or browser versions. And it’s built using unlicensed, open source solutions. But MOAD itself is not a complete solution in itself, however; it works better when integrated within a local framework, such as OpenLocal. That way, the digital local offices can take advantage of this initiative, while sharing data with other administrations.

MOAD and OpenLocal are also adapted to the legal requirements of Law 1/2014, June 24, on public transparency in Andalucía. And in terms of European requirements, they also comply with Directive 2006/123/EC, which covers free access to services in the internal market.

There is a growing need to develop efficient, cheap and interconnected digital offices in every local administration. A platform like MOAD will succeed if it proves to be scalable, so that it can be installed in both large and small sized local departments. Installations can also be customised, so that each installation includes just modules needed for that specific case.

Like other similar projects, MOAD was created to be used by citizens, private companies, local administration personnel and other public-sector offices. However in this case its primary focus is at the local level, a branch of the administration that has been traditionally ignored by other initiatives, such as serving the Provincial Governments. Projects like MOAD can help this sector to modernise and catch up with existing digital Town Council projects, including sharing open source solutions and making public data available in open formats.

For instance in Jaén’s Provincial Government the following MOAD modules are integrated into OpenLocal: public accounting; income from taxes; salaries; social services; records of cash flow; secretarial services; public space managements; and an inventory and description of public assets. In this specific application, MOAD is integrated with the Town Council, the Provincial Government, and the Grouping of Municipalities (Mancomunidad) of Jaén.

As part of an ambitious local e-administration, MOAD was started in 2006. Since then, more functionalities were added in two new versions, codenamed V1 (2009) and V2 (2011). The latest iteration, MOAD_H, aims to achieve greater homogenisation of the services offered by the Provincial Councils taking part in the project. The MOAD platform is deployed in every participating Council office, so it is accessible by the local administrations in every town or district.

The implementation plan for MOAD platform has three phases: 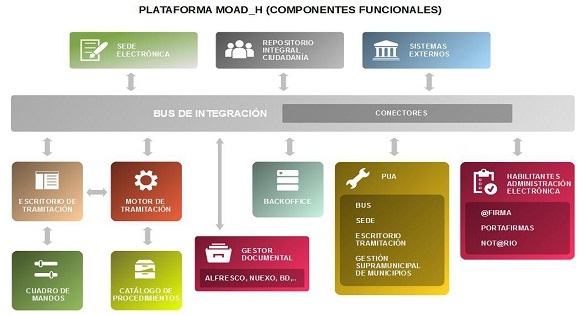 At this moment, the platform is operational in 300 Andalusian Town Councils. Most of installations are in town offices of Jaén, Sevilla, Huelva and Granada Provincial Governments. The platform is currently open for admission to new participants from Andalucía, as long as they meet the platform’s technical requirements.

Since 2007, EUR 2 million has been invested in designing, building and integrating the elements and subsystems of MOAD, along with the catalog of procedures and various upgrades. Updating the platform to the current version MOAD_H, cost a further €932,000. Of that EUR 3 million, €900,000 came from FEDER funds for regional development, between 2007 and 2013.

The promoters of MOAD in the Junta de Andalucía state, point out that the platform is built using open source standards and software only. It is also distributed under the EUPL license.

For electronic administration purposes, MOAD uses the same set of tools as the regional government: TREWA as the business process management (BPM) workflow software engine, and two platforms for managing digital authentication, certificates and signatures: @firma and Port@firmas v2.3. The web portal that gives access to the e-office is built with OpenCMS technology. Other solutions implanted in MOAD_H are Java, Alfresco (this API is widely used in this Andalucía’s e-administration, and some of its web services are built into MOAD), and Pentaho (http://www.pentaho.com) for business intelligence.

OpenLocal is an open source ERP (enterprise resource planning) solution created to interact with web platforms that deal with citizens. It offers a large catalog of web services that can adapt to the requirements of MOAD. It can be downloaded from the free software repository for Andalusian local administrations, in the same installed version inversion used by Jaén’s Provincial Government. The services available through OpenLocal extend to Level 4 of e-administration: Town Hall services related information and contents publishing; electronic interaction with citizens, including “how’s my enquiry going” feedback requests, with the ability to add new documents as an enquiry progresses; and electronic payment tools.

The OpenLocal back offices are the information systems that process the daily data input in local public administrations. In Jaén, all back offices are centralised in the Provincial Government in a first level, and at a second level in the CESEAL (Centre of Advanced Services for Local Government and Administrations). The whole process of office management – data acquisition, installation, operation and maintenance – is contracted out by the Provincial Government and the CESEAL.

OpenLocal is based solely on Java and its associated technologies such as Beans, Servlets, EJBs, JDBC and XML. If necessary, it can integrate with Microsoft .NET based solutions, which some local administrations still have.

MOAD is supported by the current Regional Ministry of Employment, Business and Commerce, through the General Administration of Telecommunications and Information Society and via collaboration agreements, with Andalusian Provincial Governments and Town Councils.

Created in a regional environment, MOAD_H should ideally be integrated within a local e-administration framework. One example is the way the Provincial Government of Jaén has integrated MOAD with the OpenLocal platform of the Provincial Government of Jaén. This is achieved using the appropriate back offices to allow interaction with financial, registration and residency management modules.

For its part, OpenLocal is the released version of the e-sijad back office by Andalusian, open source based developer e-gim. OpenLocal has modules for system administration and setup, land management, census information, revenue and tax income management, salaries and social security data, records of cash flow and management of the Town Clerk’s office, to name just a few. Any of these administration modules can be obtained on request. The software is free of charge, but the local administration must assume with its own resources the installation costs: setup, its integration with the existing e-office and the staff training.

The integration of MOAD with platforms like OpenLocal has a primary goal of allowing Andalusian local public administrations to provide services to citizens according to the legal requirements of the national Law 11/2007. This law sets out the conditions for a full electronic administration service. A secondary goal, that is just as relevant as the first one, is to create and manage a sustainable e-administration model for every Town Council in the region of Andalucía. Such a model is based on a shared, definitive catalogue of electronic procedures, allowing administrations to share a common platform for e-processing.

MOAD is a complete platform for smart digital administration, covering a wide range of digital office service needs of the citizen. The legal matters managed by MOAD – such as taxes, urban planning, healthcare, social services, sports, youth affairs and opening licences – are useful for both personal and business purposes, so private companies can also benefit from the system.

New developments in the H version of MOAD include: a mobile phone app to access the digital office; server-based digital certificate management that is independent of browser versions and operating system types; access via an electronic version of the national DNI (Spain's identity card); simplified documents and legal proceedings; an approach oriented towards transparency; and citizen participation tools.

The Andalusian regional administration has a comprehensive repository of software tools and solutions. Among these is a specific page for OpenLocal, with links to downloads and technical information.

One of the future goals of the project, according to its developers, is to get accurate data about how citizens use the platform. Developers know that without taking this information into account, it will take them longer to adapt to demands and complaints. On the other hand, local administrations have a responsibility to follow up on any feedback received through OpenLocal.

The data managed by MOAD interconnects with various external systems and platforms in the region’s local administrations. Some examples are OpenLocal in Jaén’s Provincial Government; ACCEDE in the same office but in the town of Granada, where it has a similar level of integration that of OpenLocal; SIDERAL for registration procedures; and E-PADRON/DECRETA for official resolutions, notifications and communications in the Provincial Governments of Sevilla and Huelva. The MOAD services will also soon be connected to the national Tablón Edictal Único, a centralised digital board for Spain’s official state gazette (the BOE).

The MOAD project began in 2006, a year before Spain passed its law to develop the right to access the digital administration. At that time, the only initiative which could be similar to MOAD in its goals and nature was the SIGEM platform run by the Ministry of Treasury and Public Administrations. Unlike MOAD, SIGEM was not oriented towards multiple entities and it was not based on open source standards and software, so the MOAD developers rejected it as a reference or inspiration.

MOAD in the regional administrations has achieved one of the main targets of any efficient-sector digital office, to avoid duplication. With MOAD, there can be only one set of tools for different administrations, who share the same data and resources, without the need to start a new R&D project in every Town Council. MOAD therefore saves money from cash-strapped public-sector budgets.