Study: Germany behind in eGov…

Study: Germany behind in eGovernment

Germany has a lot of catching up to do when it comes to eGovernment, a study by the Commission of Experts for Research and Innovation (EFI) shows. The number and quality of eGovernment services is low, the experts say, and government data is not readily published as open data. 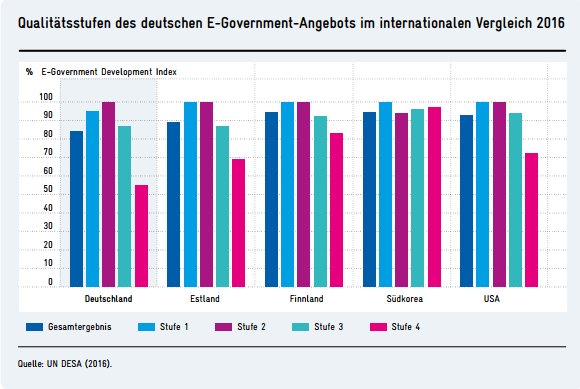 The EFI commission calls on the federal government to shore up the quality of eGovernment services, and to create economic potential by opening up. The experts want the government to set itself ‘ambitious targets’, to turn Germany into a model for digital government by 2025.

From the English summary of the report:

“In eGovernment, Germany should be recognised in Europe as a successful model of digital government and administration by 2025. Hesitant positioning on the part of German R&I policy is no longer the way forward – the challenges are too big for that. The successes achieved up to now should encourage German R&I policy to believe it can achieve major changes if it sets itself ambitious targets.”

The report refers to the United Nations’ 2016 eGovernment Development Index, showing that in Germany the quality of eGovernment, is for the most part, behind that of South Korea, Estonia and the USA (see figure).

The experts recommend the government creates either a coordination office at the Federal Chancellery, or a Ministry for Digitisation with far-reaching responsibilities, including infrastructure, funding, eGovernment and procurement.

The EFI report was handed to Federal Chancellor Angela Merkel, earlier this month.

Thank you for your interest in the Joinup platform. We will follow up with you (by email) concerning your request to share related Korean e-Government material on Joinup.