Healthy Ireland is a national framework for action to improve the health and wellbeing of the people of Ireland. Its main focus is on prevention and keeping people healthier for longer, while at the same time advocating for stronger health systems.

Although the initiative has had a slow start, the Council responsible for the engagement of the wider society has published an action plan for 2015, and a research plan and an Outcomes Framework are under way.

Healthy Ireland takes a whole-of-government and whole-of-society approach, where the health sector cooperates with other areas of government and public services concerned with social protection, children, business, food safety, education, housing, transport and the environment. It also invites the private and voluntary sector to participate. The framework is based on the international experience and thinking in addressing the broad social determinants of health and derives from 'WHO Health 2020: the European policy on health and wellbeing'.

WHO Health 2020 is a European health policy framework, which aims to support action across government and society to: significantly improve the health and wellbeing of populations, reduce health inequalities, strengthen public health and ensure people-centred health systems that are universal, equitable, sustainable and of high quality.

The policy framework is evidence-based and peer-reviewed, and makes the case for investment in health and creating societies where health is valued. It details the ways that good health benefits all in society, being vital for economic and social development, and supporting economic recovery.

The framework gives policy-makers a vision, a strategic path, a set of priorities and a range of suggestions, and it identifies strategies for action that are adaptable to the many contextual realities of the WHO European Region. Health 2020 was adopted by the 53 Member States of the region in 2012.

The Healthy Ireland framework was published in March 2013. In his foreword, Taoiseach (Prime Minister) Enda Kenny emphasises the importance of health and wellbeing in addition to economic progress in order to have a vibrant Irish society where everybody participates and feels they belong. He identifies the "modern lifestyle" as the most important cause of emerging health problems and the associated economic and social costs, e.g. poor diet, smoking, alcohol misuse and physical inactivity causing obesity, type-2 diabetes, obstructive pulmonary disease, cancer hypertension, coronary heart disease, stroke, and other chronic diseases, leading to disabilities and premature deaths.

James Reilly, until last year Minister for Health and now Minister for Children and Youth Affairs, calls this a future that is dangerously unhealthy and very likely unaffordable. A health service that is accessible and fair will only succeed if we build an environment that supports people and their families to lead healthier lifestyles. That takes the involvement of the whole community, the whole of government, all of society working in unison.

The health sector alone cannot address these problems, says Kenny. It is this framework which will bring together people and organisations into a national movement with one aim: supporting all of us to enjoy the best possible health and wellbeing. It is designed to include government departments, local authorities and public bodies, businesses and employers, sports and voluntary groups, communities and families. 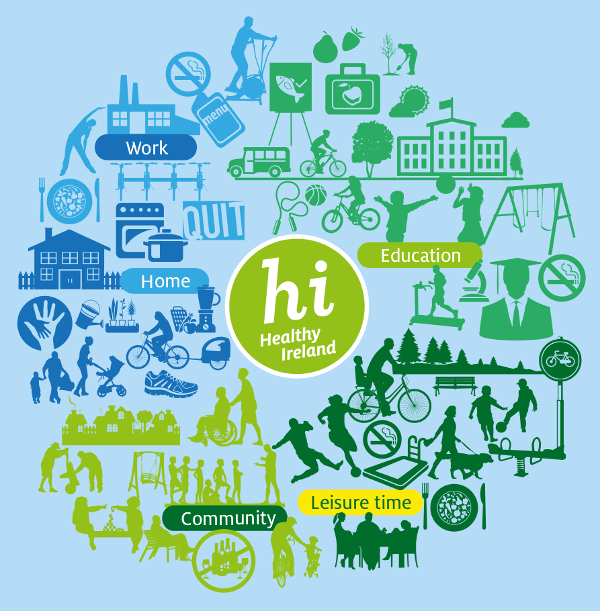 Healthy Ireland's goals are to:

To accomplish this, Healthy Ireland arranges cooperation between the health sector, other areas of government and public services involved in social protection, children, business, food safety, education, housing, transport and the environment. It also invites the private and voluntary sector to participate through various programmes.

On the Healthy Ireland website, about a dozen topics are listed that describe the policies, recommendations and actions to achieve the goals mentioned above:

The implementation of the Healthy Ireland framework is overseen by the Cabinet Committee on Social Policy and Public Sector Reform, which is chaired by the Taoiseach.

In the plan, 64 action points have been defined in six thematic areas:

Last autumn, Michael McKernan, a former Special Adviser to the Minister at the Northern Ireland Department for Social Development, expressed his worries about the slow roll-out of the Health Ireland initiative. The Council should have been established in 2013, followed by the High-level Implementation Plan and the Outcomes Framework. The Council, however, only had its first meeting in June 2014, and the research plan and the Outcomes Framework have not been published at the time of writing.

While many of the elements of the Healthy Ireland framework are beginning to move into the 'implementing and operationalising' stage, the broad and complex nature of the framework and the significant change agenda associated with its implementation require that a critical focus remains on the wider enablers of implementation such as stakeholder consultation, building a supportive culture, communication and leadership, says Kate O'Flaherty, Director of Healthy Ireland.

It is important to acknowledge that it takes time to ensure this enabling environment is appropriately built and strengthened, to build close links and working relationships with key areas in other government departments to progress the 'whole of government' approach underpinning the framework and to identify potential barriers to progress and find solutions, and to exploit opportunities to progress a 'health in all policies' approach.

Implementation is supported by a Cross Sectoral Group comprising senior officials from key government departments and agencies, and by a Healthy Ireland Council whose membership derives from a range of stakeholders from different sectors. The initial phase of implementation 2013/2014 has focussed on establishing the underpinning architecture, and accountability structures and mechanisms; building the capacity of the Health and Wellbeing Programme unit in the Department of Health and embedding its work in the department's overall responsibilities and work; establishing and supporting the Health Service Executive (HSE) capacity around health and wellbeing through a new Health and Wellbeing Division; identifying and building key strategic relationships and partnerships across a range of cross-sectoral partners; and initiating a number of key foundational projects.

The Programme unit has established a good foundation for driving the 'whole of government' approach which is now entering a critical stage to make real impact in terms of improving communications, efficiency, coherence and accountability across linked policy areas, as well as making progress on integrating policy development and implementation, and delivering a comprehensive policy and legislative programme across a range of public health and societal challenges.

According to O'Flaherty, the current state of the key deliverables is as follows:

Healthy Ireland is not only about driving lifestyle changes per se, O'Flaherty continues, but also a cultural shift, to make health and wellbeing more central to what we do not only as a government but as a society. So, yes, it may take time to see some of the key health indicators change at population level, but I think we now have a comprehensive approach and are building the engagement of other sectors, including those who were not seen as key players in health and wellbeing previously, such as the wider business community.

Change at the level of Healthy Ireland will take time, and indeed is recognised in other countries as a long-term approach, but through delivering our key projects over the next two years, we hope to have moved the agenda forward so we can build on it. We have to put health and wellbeing on other sectors' agendas in a meaningful way, which takes time to build the relationships and see what might be the best approach to implementation to work towards shared outcomes. This will be different in different countries according to the culture and wider environmental context, and indeed different approaches may be needed in different sectors.

According to O'Flaherty, it is too early yet to say if there are any changes at population level in terms of improved health. Over the coming years, through our Healthy Ireland Survey and the Outcomes Framework — as well as other surveys, e.g. of school children — we hope to be able to measure these changes. For now, in the initial years, maintaining awareness and getting buy-in from a wide range of stakeholders is a key focus.

The 'whole of society' part is going well. It is a real priority in terms of engaging outside of health, and starting to put a focus on empowering people and communities to improve their own health. With our Healthy Ireland Council we are currently developing an enhanced communications infrastructure — a website, social media, and the such — to support public engagement. We will be launching these later this year. In addition, the National Physical Activity Plan has huge support across a range of stakeholders, from sporting organisations, community groups, the educational sector and others, so that will be a real exemplar of Healthy Ireland in action. In addition, we have had huge interest and support across the business and private sector for the Healthy Workplace initiative, which will give an opportunity for many in those sectors to play a part in creating a healthier Ireland. Another recent development was the launch of a new philanthropic fund aligned with Healthy Ireland from the Medtronic company.

We have re-energised the focus on the social determinants of health and health inequalities, and ensuring that everyone in Ireland can be a part of, and benefit from, a healthy Ireland, O'Flaherty continues. The framework runs from 2013 to 2025, so we have another decade to work toward our goals and vision.

We have a small team here in the Department of Health. Our budget comes from the department's budget, but our role is primarily coordinating and supporting implementation, so it's also about leveraging the resources in our partners.

O'Flaherty feels their approach to focus on the enablers of implementation, on communications, relationships, and leadership to seek out new partners and opportunities are worth sharing with others; being open and inclusive to how they might approach implementation are important as well. We are using the usual processes of how business is done in government, but we are also focussing on involving sectors outside of government and thinking about new ways of doing things. I think being open to exploring with business, with sporting organisations and others on how they can play a role, and persuading them that Healthy Ireland is their agenda too is important. We have looked at things like implementation science, for example, to help inform our approach. Cross-sectoral working and particularly on a huge societal issue like health and wellbeing is challenging, so we have to be open to what might work, and to facilitate and empower other sectors to take on the challenge.