Greece’s Ministry of Digital Policy is going to pilot the use of electronic signatures as part of the Ministry’s document workflow. The kick-off for the project was announced by the ministry last week.

The ministry has signed a contract with Hellenic Telecommunications Organisation (OTE). According to a company spokesman, OTE will use the Greek government cloud to allow the use of digital certificates by 200 users within the ministry and 400 external users. The pilot will use certificates from ERMIS, Greece’s eGovernment portal, in combination with one-time passwords sent to users’ mobile phones.

If the pilot is successful, it could be implemented by other ministries, the OTE spokesperson said.

The ministry’s announcement of the project launch coincided with a visit to the ministry by the European Commissioner for Digital Economy and Society, Mariya Gabriel. 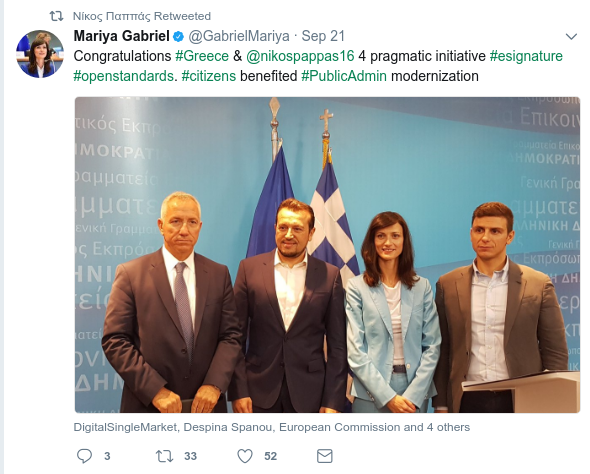 "Today is a milestone for the public sector, which is taking an essential step towards digitisation. It is a project that will simplify and speed up the public services, while saving costs. It will also greatly improve the everyday life of the citizen”, an announcement by the ministry quotes its Secretary General Digital Policy, Stelios Rallis, as saying. “It is important to note that the cost of the project is extremely low, less than EUR 60,000, with a return on investment expected within a few months.”

Them ministry published its call for tender last June. Requirements include the use of Europe’s eIDAS eSignature standards.

Announcement by the Ministry of Digital Policy (in Greek)