Supported in a strategic plan defined by the Portuguese Government, Rede TIC e Sociedade is a project focused on promoting inclusion and digital literacy, reducing the digital gap that still divides the Portuguese society in two different groups: digital users and the Internet´s excluded. Working as a multi-stakeholder initiative, the project combines the knowledge and experience of more than 500 partners and is one of the key projects to focus on digital inclusion and digital skills development in Portugal.

Several studies show that 28% of the Portuguese population never used the Internet, a number that is still above the EU average. And the gap remains, especially among the elders, economically deprived and less educated groups of population, a scenery similar to what can be found in other European countries.

In a society focused on improving digital economy and knowledge, these numbers are looked at with concern. Digital technologies play an important role in Europeans’ everyday life, allowing people and businesses to transform the ways they communicate and engage with one another. Internet is also becoming a preferential platform for engaging with governmental services and healthcare, with more platforms being developed to digitalise services and provide tax information´s online access, documents and registries, and also medical appointments as well as surgery lists.

The investments in eGovernment platforms and communication infrastructure must be combined with initiatives that help digitally excluded populations´ to experience the benefits of digital services, providing also a more democratic access to every groups of the population. This has been the understanding of European Commission that has funded several different national plans to improve digital literacy and digital skills´ development throughout European countries.

A network to connect the entire country

The Portuguese ICT and Society Network´s project (Rede TIC e Sociedade) was launched in 2013 but was built on the experience of Telecenters, called Espaços internet. The first initiative started in 1999 by creating a local space where people could use computers and access the Internet for free, with the assistance of an expert, if necessary. The project evolved in 2008 to a Telecenter Network (Rede de Espaços internet), reaching 1.200 telecenters by 2011, but with a larger adoption of computer usage at home and Internet access, the project was reorganized and transformed, focusing mainly in developing digital skills with a new network, supported in civil society´s partnership.

Maria Fernanda Rollo, Secretary of State of Science, Technology and Higher Education, explains “ICT and Society Network is basically a tool in a major strategic plan”. The plan is “Estratégia Nacional para a Inclusão e Literacia Digitais” (National Strategy for Digital Literacy and Inclusion) developed by several government agents and coordinated by Fundação Ciência e Tecnologia, a government’s agency for developing science that has also the mission to develop Information Society, but other government institutes are also active participants.

The initiative was created with two main goals: to create a network structure capable of working collaboratively to promote digital literacy, providing training tools; and to develop a national strategy for digital literacy and inclusion.

In the last years´ digital inclusion numbers show an improvement on the literacy skills and a reduction of the internet excluded, but at a very slow pace. The main indicator monitored is the rate of non-Internet users (by the national statistical institute (INE) and Eurostat) than was fixed at 33% in 2013, falling to 28% in 2015. 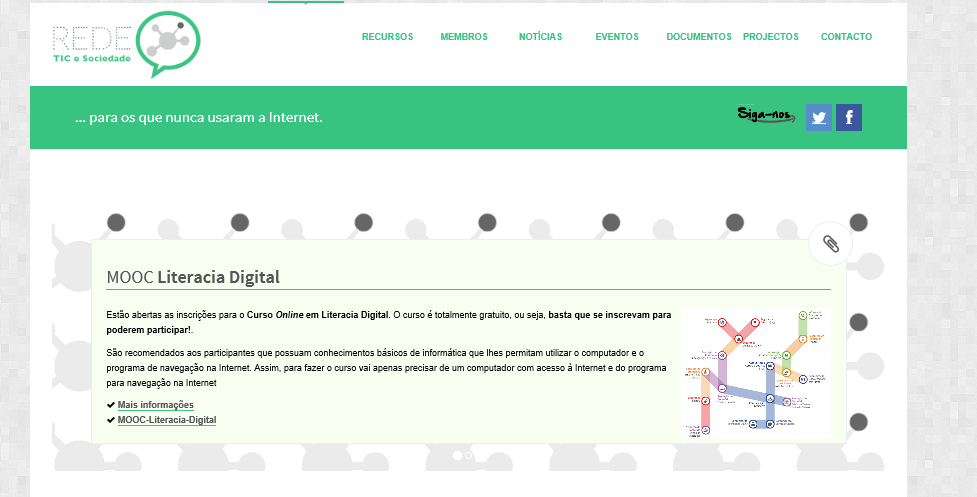 Digital inclusion and Digital Skill’s development have been promoted globally by organizations as United Nations and European Commission has been actively involved in reducing the digital gap numbers in Europe, specially intensified with the integration of ten new countries in the last decade. The digital agenda for Europe plans to help Europe’s citizens and businesses to get the most out of digital technologies, rebooting the economy and focusing on a knowledge society.

The plan marked several targets, on infrastructure, digital goods acquisition and also on digital inclusion, focusing on better indexes for regular internet use in all European population but also in disadvantaged people, and reducing the number of citizens that have never used internet.

With a multi-stakeholder approach, the network used initial funds from the Portuguese government but is also using other funding initiatives, like Portugal 2020, particularly the Operational Program for Social Inclusion and Entrepreneurship, to guarantee the project´s development.

The first phase of Rede TIC e Sociedade was similar to Telecentre-Europe organization, but in this case the network is promoted by an ONG that works as the main hub and partners need to pay an annual fee. In Portugal the networks doesn´t have a main hub and there are no fees involved in the application for partnership.

The network is opened to civil society and the initiatives are focused on digital inclusion and digital skill´s development in all the Portuguese society. But most of the local projects target citizen´s above 45 years, with low income and basic level of education, where the digital literacy gap is more deep.

As a multi-stakeholder network, members of Rede TIC e Sociedade are invited to participate and among the more than 500 stakeholders there are government institutes, but also private companies, ONGs and even individual persons. There are 5 categories of members, a digital facilitator who can be a person or an organization, a sponsor, a spreader, a digital services provider, and a creator of digital content, each one with different roles for the netwrk development.

Rede TIC e Sociedade is based on the innovative scalability´s principles, building small projects with few resources and getting them to work for bigger initiatives involving more partners and new resources.

In the last three years there was a huge effort to get the initiative going and working in the field, requiring a lot of travelling, conferences, meetings and seminars, but also testing of education content for digital inclusion in a pilot project with a higher education institute local administration and social organizations, but with the results showing on, the objective is to continue developing the initiative.

Building the initiative on a network of partners, connected by the common purpose of developing digital inclusion, Rede TIC e Sociedade was already able to gain the collaboration of 500 partners to deliver products, content and project to the project. This kind of collaboration can build up to guarantee a continuity of the initiative, even without a strong political support or clear funding lines.

Hundreds of Portuguese citizen’s had already their first experience in internet because of this project, and the literacy gap in Portugal is steadily being reduced, guaranteeing a stronger inclusion in Digital Society.