Digital Agenda Vienna recently won gold in the category 'Pioneering project for the design of modern government' of the German eGovernment Contest (eGovernment-Wettbewerb) 2015.

The project used a participatory process to develop a new ICT strategy for the City of Vienna. The main goals were to integrate inside and outside viewpoints into a single vision and to get commitment from the stakeholders.

Involving all citizens through a process like this results in a high-quality result and a high acceptance of the Digital Agenda. The diversity of the ideas was also a great success.

When its ICT strategy — dating back to 2008 — was up for renewal, the City of Vienna decided to set up a participatory process to discuss issues and ideas and to interact with its citizens. The City aimed to collect input from its users, and to get citizens and businesses involved. The keywords were participation, openness and transparency.

The goals for this project were:

The political requirements for the Digital Agenda all evolved around 'digital democracy':

The Digital Agenda project aimed to collect different viewpoints and opinions for the new ICT requirements of the City of Vienna from citizens, businesses and employees. Civil servants were allowed to participate too. Digitalisation changes the economy, society and government, says Thomas Schuhböck from the CIO Office at the City of Vienna, and we needed to develop a Digital Agenda with principles and projects to handle the challenges.

The project provided an online platform on which during the first phase the City published issues and people could contribute and discuss ideas. This input was then incorporated by municipal workgroups into a draft strategy document, which in the second online phase was published for discussion and feedback.

The subsequent steps in the creation of the new Digital Agenda were: 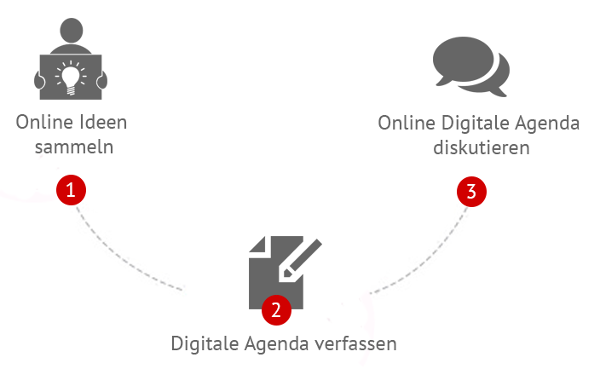 In the first online phase, the City asked its community high-level questions such as:

Over a period of one month, the Digital Vienna portal generated 478 registered users, 172 ideas, 296 comments, and 2451 votes (likes/dislikes). To ensure privacy, participants could register using a nickname if they wished.

Some of the ideas brought up by the visitors were:

In the following months, the ideas, comments and feedback provided by the visitors was processed by five working groups:

The working groups were careful to include the names of the people and organisations who contributed the various ideas. Finally, these texts were consolidated in a single 500-page document, of which 30 pages describe the proposed digital infrastructure.

Some highlights of the projects included in the draft document are:

References to the various ideas relating to the individual projects were included as footnotes, and all ideas and comments were collected in a separate annex.

As part of its Digital Agenda, the City of Vienna added eight general principles that can be summarised as:

The draft text was published on the website for discussion on April 8, 2015. During the three following weeks, visitors generated over 300 comments and 3000 votes.

After working this feedback into the document, the final 'Digital Agenda for Smart City Vienna' was published last June.

This is not the end of it, however. The platform will remain online, and once a year a new citizen participation process will be started to fine-tune and update the ICT strategy. In the meantime, the working groups will continue to develop their ideas. Their implementation will be discussed regularly, and participants will receive feedback on the improvements every year.

The City of Vienna has previously had great experiences in using participatory processes, says Schuhböck, for example with the Vienna Charter. [The Vienna Charter is a process started in 2012 to work out principles and rules for good neighbourly relations in the city.]

The participants invested much time and had great engagement. Their ideas were very valuable, helpful and innovative. We got an overview of the needs of the citizens, the economy and other stakeholders.

The approach of the Digital Agenda project has become good practice, especially the multi-stage process using online and offline phases.

According to Schuhböck, the costs for the technical platform — implementation and support — were about 30,000 euro. We deployed a startup company to build the site, as an example of innovative public procurement.

The costs would not have been any different if we had written a traditional ICT strategy document, because then we would have had additional costs for external consulting for the social and economic dimension.

Involving all citizens through a process like this results in a high-quality result and a high acceptance of the Digital Agenda. The diversity of the ideas was also a great success.

The Vienna University of Economics and Business, together with independent researcher John May, published an analysis of the participatory efficiency of the Digital Agenda Vienna process.

From the Digital Vienna project, Schuhböck has two lessons he would like to share: On the positive side, the full openness of the process in each phase and the participation of the contributors in the offline working groups. On the negative side, we used an external consulting firm that had a conventional approach to project management.