In June, Italy’s central eInvoicing system handled over 10 million invoices, 5 % more than in May, reports the Agency for the Digitalization of the Public Sector (Agenzia per l'Italia Digitale, AGID). “The number of invoices received is rising, and the amount of rejects is decreasing”, AGID writes.

With just 8.5 % rejects between 6 June and 30 June, the number of invoices not accepted by the system was the lowest so far, AGID reports. Rejects can be caused for many reasons, but not being able to identify or deliver the invoice to the correct destination is rare (0.11 %). AGID is contacting the companies that submit erroneous eInvoices, to help them resolve the errors. 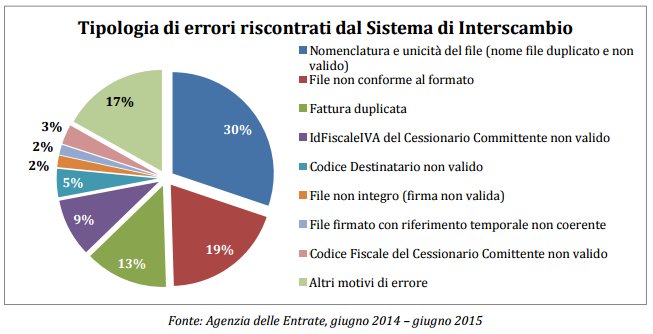 In July, AGID published its 'report on the adoption of eInvoicing by public administrations and businesses’. The report shows that the most common errors are not assigning a unique name to the electronic files, and submitting documents that don’t conform to the specifications. The third most common error is submitting an invoice multiple times.

Sending invoices electronically to Italy’s public administrations had been mandatory since 31 March 2015. For ministries, tax agencies and national security agencies eInvoicing has been compulsory since June 2014.

Italian companies must submit invoices in a digitally signed, XML document, following the FatturaPA specifications. These invoices will be kept digitally for ten years.

Announcement by AGID (in Italian)
Report on the adoption of e-invoicing by public administrations and businesses (in Italian, PDF)