During the recent Paris Open Source Summit on 5 December 2018, Joinup presented the draft for a new licensing assistant. 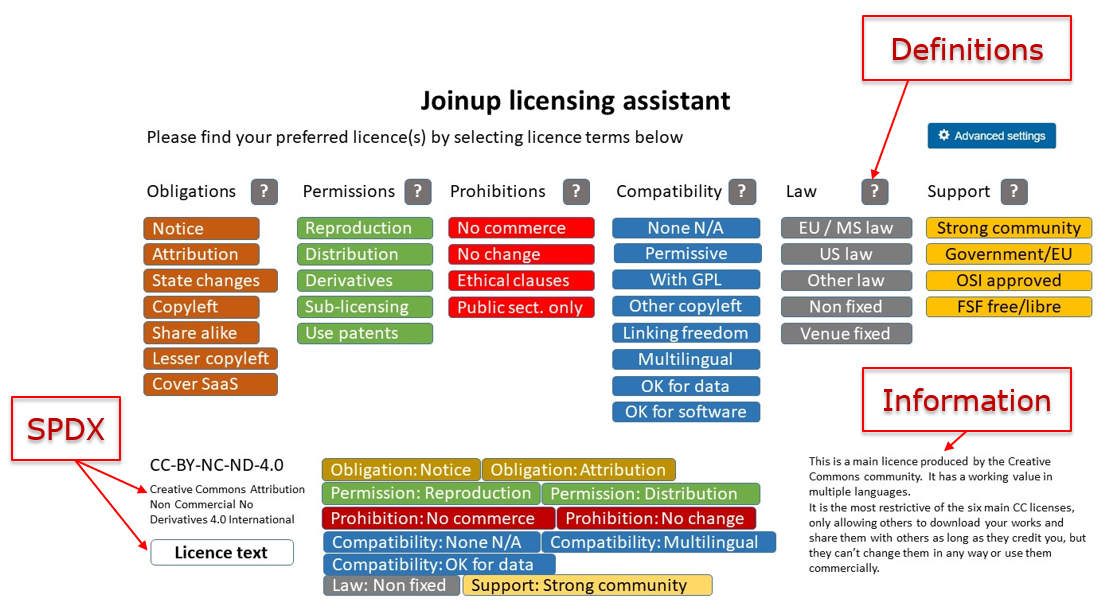 More than 350 different licences are proposed to developers and users, some of them are widely used and supported by strong communities or institutions, while others are more specific or exotic, making the selection of a convenient licence increasingly difficult. The lack of compatibility between different licences can make the distribution of combined software with components that have been licensed differently, hazardous.

Various classifications have been presented by free/open source organisations like the Open Source Initiative or the Free Software Foundation. Various thesis and studies have also been published. Moreover, various tools facilitating the selection of licences, such as “Choosealicence.com”, are also available. But none of these tools provides a user-friendly selection process, based on the specific characteristics of each licence.

In a first stage, the objective of the Joinup Licensing Assistant (JLA) is to facilitate the selection and understanding of licences based on their content and purpose. As the consideration of the content cannot be enough, the JLA will also assess the compatibility or interoperability of a licence with other licences, its effective use, and the support given to the developers/recipient community.

The JLA would reuse and adapt the software tool developed for the European Data Portal (EDP), by increasing the number of categories and by providing access to licence identifiers - which takes into account names and texts according to the SPDX standard and by providing specific comments on its use, compatibility and support provided.

The presentation was followed by an attentive audience and welcomed by the lawyers participating in the EOLE session (European Open Source Lawyers Event).

If approved internally, the JLA could be implemented during the second and third quarter of 2019.

Presentation at the EOLE session

In the picture, I see that the "Compatibility" category makes a distinction between "OK for data" and "OK for software". How is data and software defined here? Wouldn't data be included in software? I consider all data and information used by a computer to be software, including digital documentation, instructions, art, programs, music, any other digital assets, etc.