The Slovenian Ministry of Public Administration 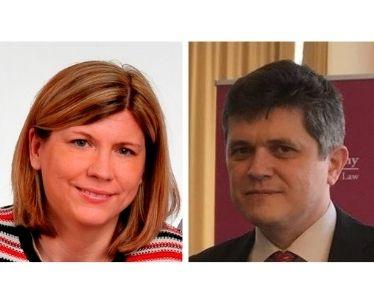 Karmen Kern Pipan and Tadej Gabrijel have used IMAPS for assessing one digital public service provided by the Slovenian Ministry of Public Administration.

How did you learn about IMAPS?

In the past, we had heard of IMAPS as one of the solutions developed by the ISA² programme for interoperability issues. This was however the first time that we used IMAPS in practice.

How did you use IMAPS?

IMAPS was used for assessing the interoperability of one digital public service, i.e. ‘online application for subsidised public transport tickets for students’, provided by the Slovenian Ministry of Public Administration via its eGovernment portal (“eUprava”). In the assessment, different departments and teams were involved, i.e. colleagues from the Electronic Services Development Department and Data Management Department.

The IMAPS expert team from the European Commission facilitated IMAPS knowledge transfer sessions with our project team. They assisted us in the IMAPS assessment and reflected with us upon the recommendations that we received for improving our digital public service.

What insights did IMAPS provide you?

The IMAPS assessment exercise was very valuable and showed the entire spectrum of interoperability aspects of a digital public service. We gained a broader view on the various stakeholders involved in the provision of the digital public service, and the complexity of its content. Moreover, IMAPS allowed us to capture the different processes, which support the service and the collaboration between the different departments involved. The IMAPS assessment also helped us to better understand and clearly define the respective role of the departments in the service. Colleagues working back-office, such as on semantic and technical aspects of the service, got new insights on how their activities are contributing to the service and connecting with the activities of other teams.

In general, our colleagues participating in the IMAPS assessment were satisfied with the experience.

Regarding the reuse of IMAPS for the assessment of other services: as for now, we received sufficient insights. We will prioritise the follow-up with decision-makers on the IMAPS recommendations for the service and the shortcomings revealed by IMAPS assessment. First, we want to take action to improve the service and thereby show the benefits of IMAPS. In the future, we might consider extending the use of IMAPS to other services.

How did it increase the level of interoperability of your organisation with other organisations at cross-border and cross-sector levels?

The positive effects for the service – and the benefits of IMAPS (e.g. cost savings) – can only be observed in the longer term. We invested time and human power for carrying out the IMAPS assessment. This also led to a reflection on how to use resources more effectively.

In the short-term, IMAPS has brought benefits not only on cross-sectoral level, but also for our internal ways of working.

IMAPS has revealed the need for improving collaboration and communication between our teams working on different elements of the service. The IMAPS exercise provided the opportunity to better align experts and helped to find a common language and goals. We learned about the practical meaning of legal, organisational, semantic and technical interoperability. In the end, it contributes to coherence and conversion between the different teams involved. This is of particular value in view of the implementation of the Single Digital Gateway requirements.

How has IMAPS helped you at providing better services to businesses and citizens across the EU and beyond?

Citizens are traveling; business is done in other countries. IMAPS encourages us to improve our services by considering them in a more holistic way, by using standards and approaches which are also applied by public administrations in other countries in Europe.

IMAPS could capture these good practices of other public administrations providing digital public services, identified during the IMAPS assessments, and make them available. IMAPS could play a more active role in supporting this sharing of good practices.

What challenges did you encounter during the IMAPS assessment?

The IMAPS assessment raised some initial internal challenges: not all colleagues had the same knowledge of IMAPS and EIF. During the exercise, we came to a common level of understanding. It is key to preparing the IMAPS assessment in advance by reading of the relevant documentation.

Concerning the IMAPS questionnaire, it was difficult in some cases to understand the meaning of the questions. Providing more concrete examples and explanations would contribute to a better understanding of the question, such as the IMAPS definition of a certification procedure in the context of the service management.

The main obstacle for using IMAPS was not the language, but encouraging colleagues to commit time to familiarise themselves with the IMAPS-related documentation and concepts, such as the European Interoperability Framework (EIF), our colleagues.

In the end, we can say that we made the right decision in taking part in the IMAPS knowledge transfer.

What were the lessons learnt from its use?

This exercise helped us to identify shortcomings. Information exchange and knowledge sharing was improved throughout our organisation. IMAPS provided a practical example of the use of the European Interoperability Framework (EIF) and related concepts.

It showed us that we can communicate better internally and share knowledge even more. The team work emerging out of the IMAPS assessment was a very good experience. It allowed us to see the complexity of requirements of a digital public services but also the practical connection between service performance and its organisational part, i.e. the supporting back-office activities at legal, semantic and technical level. This also meant practical connection with other colleagues.

Would you recommend IMAPS to other public administrations?

In the case of Slovenia, the Ministry of Public Administration is the main responsible and the delivery of digital public services is centralised, it is the main organisation for which IMAPS is very relevant. For other public administrations which publish their services on the e-Government Portal, provided by the Ministry of Public Administration, IMAPS is less relevant. However, for those institutions which produce services independently, such as for tax administration or pensions, IMAPS could be of interest. They have their own planning and resources. It could be interesting for them to familiarise with IMAPS.

Do you want to know how your digital public service scores in terms of interoperability?

Would you like to discover the IMAPS solution in more detail?