Ireland is adopting initiatives to cover its Interoperability gap assessed in the last NIFO factsheet (dated 2016) and to realign with the most advanced European Countries on this theme. The last action is the sign up of Ireland in the PEPPOL community, a step that is coherent with the recent reform of eGovernment strategy towards 2020. This strategy aims to put Ireland as example in eGovernment services and confirms the Government’s support for the underlying principles of the EU eGovernment Action Plan.

The Pan-European Public Procurement On-Line (PEPPOL) project was a pilot project funded jointly by the European Commission and the PEPPOL Consortium members. PEPPOL is a set of artifacts and specifications enabling cross-border eProcurement. Its use is governed by a multi-lateral agreement structure which is owned and maintained by OpenPEPPOL.

The OpenPEPPOL Association was established on 1st September 2012 after the successful implementation of PEPPOL specifications in several European countries.

Through agreement on specifications for cross-border procurement processes, the PEPPOL project has contributed to the development of a pan-European, standards-based IT infrastructure. PEPPOL has not replaced but built upon the existing strengths of national eProcurement systems by using information and communication technologies to enable them to connect with each other.

Put in perspective with the EIF underlying principles, the key benefits of the PEPPOL for the citizens are:

The European law which gave the most important input for this evolution is the European eInvoicing Directive (2014/55/EU): EU countries and the European Commission decided to introduce a European Standard for e-invoicing in response to the many e-invoice formats used across the EU.

Irish recognition of eInvoice dates of the Statutory Instrument 354 (in effect from 1st January 2013) established electronic invoices on an equal footing with paper invoices and incorporates the definition of an electronic invoice's processing. The framework law that is helping Ireland moving towards Innovation and eServices progress is the eGovernment strategy towards 2020. The Strategy is closely aligned with the Public Service Reform Plan and the Civil Service Renewal Plan, a legislative instrument that makes Ireland compliant with most of the monitoring criteria foreseen by the NIFO observatory in the past.  It also provides an ICT response to important themes addressed in the National Action Plan 2016-2018.

The adoption and implementation of the eGovernment strategy and the eInvoice compliance actions go through the satisfaction of the final users: Irish citizens and businesses. A traineeship is needed for the civil servants to reach such objective and the current government is seeking to emphasise and increase the use and importance of technology. This is valid not only in the carrying out of public sector works but also in engaging and managing the State's relationships with contractors across all fields of procurement.

Looking from a wider and continental perspective, the PEPPOL association has similar aims since it wants to enable European businesses to easily and electronically deal with any European public sector buyers in their procurement processes. This thereby increases opportunities for greater competition for government contracts and provides better value for tax payers’ money.

The Association provides an authoritative point of reference for networks of interoperable, PEPPOL-compliant infrastructure and the organisations that use it. It ensures high level governance and continuation of the agreement infrastructure.

In January 2018 Minister of State Patrick O’Donovan engaged ireland as a PEPPOL Authority member. The membership to OpenPEPPOL provides the country with a set of facilities to implement the different parts of the National system to be compliant with the eInvoice directive in a collaborative approach with solutions shared with the other members.

The implementation of the eProcurement is below the responsibility of the Office for Government Procurement (OGP), in close collaboration with the Departments of Finance and the one of Public Expenditure and Reform. 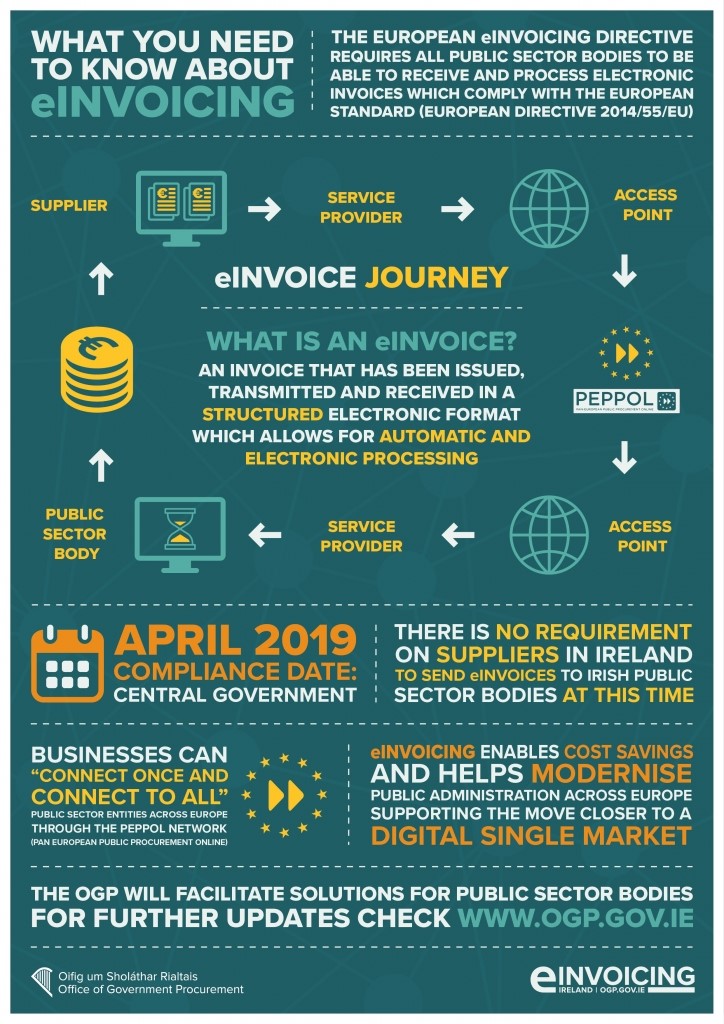 The OGP is then from January a complete member of the openPEPPOL, which groups the National Authorities that are responsible for the implementation of the eInvoice at their country level, following the framework Directive mentioned.

The key element for the correct exchange of document among different authoritative members of the PEPPOL network is the access points. They enable access to PEPPOL standards-based IT transport infrastructure and provide services for eProcurement with standardised electronic document formats.

PEPPOL developed the Business Interoperability Specifications (BIS) for common eProcurement processes such as eCatalogue, eOrders, and eInvoices. The standardised exchange and validation of lectronic documents is executed via an open and secured network between sending and receiving Access Points (i.e the buyingpublic sector and its suppliers across Europe).

Joining OpenPeppol means adopting its vision and technological solutions. The main aim of the PEPPOL network is to continue to grow in an open, accessible and compliant manner, supporting interoperability for European public services and helping Europe move towards a Digital Single Market. This means that no matter the technological solution that has been adopted by a country, the important is that the communication and protocol transfer is granted among the different countries and thus the different systems adopted by them.

This is ensured through a set of releases that openPEPPOL provides on his portal. They are the technical specifications to be followed by the national authoritative bodies.They include access point implementations, software adoption and implementation, network specifications and other kind of guidelines such as a Virtual Company Dossier (to allow suppliers to submit company information in a andardized ‘re‐usable’ format), an eCatalogue to be used in the tendering process and a pan‐European e‐signature validation service.

The membership of openPEPPOL, and thus the compliance with the eInvoice directive, will increase efficiency, transparency and competition in the Irish public sector. This benefit is reached by allowing documents such as orders and invoices to be submitted electronically, thereby increasing cost savings for all and ensuring fairness. Secondly, Irish suppliers gain access to all European public sector buyers using the PEPPOL network, increasing opportunities for Irish businesses by opening up public markets. Also, being an Authority Member, Ireland will be able to actively participate in the further developments and operation of PEPPOL.