Over the last six years, hundreds of datasets have been published on the open data portal of the Helsinki Metropolitan Area, the region comprising the Finnish cities of Helsinki, Vantaa, Espoo and Kauniainen. According to the City of Helsinki, just opening up the data has resulted in budget savings of 1-2 percent. Making lots of our city purchase data public has opened up a new view for citizens into city administration, and increased people's trust toward the city and its officials, said Tanja Lahti, the project manager for the Helsinki Region Infoshare (HRI) service.

Cities continuously collect and produce large quantities of data used in planning, production and decision-making processes, and in the evaluation of municipal activities. Traditionally, this data has only been available within the city for internal use. Since 2011, however, the cities of the Helsinki Metropolitan Area have been opening up data to the public and to businesses.

According to the developers of the HRI portal, open data increases citizens' knowledge and understanding of their living area, its history and its future development. This increases their overall activity, participation and interaction — in short, citizens become more involved. Open data can be seen as a facilitator for creating new services and business opportunities, and it supports research and development. Public data increases in value the more it is used.

The HRI service aims to make regional information quickly and easily accessible to all. Through a web service, it provides access to municipal open data sources from Helsinki, Vantaa, Espoo and Kauniainen. The published data is mainly statistical, giving a comprehensive view of urban living conditions, economics, well-being, employment and transport. A good proportion of the data is GIS based.

The data on offer is available under the Creative Commons BY 4.0 license and is ready to be used freely at no cost. There are no limitations on users; anyone interested in open data can participate.

In 2012, the City of Helsinki and Forum Virium Helsinki (see below) created the concept for Helsinki Loves Developers (Hel<3Dev). This provides an open platform and meetups for discussion and co-creation, aiming to enhance open dialogue and developer cooperation. The accompanying website provides technical documentation and details of open APIs. 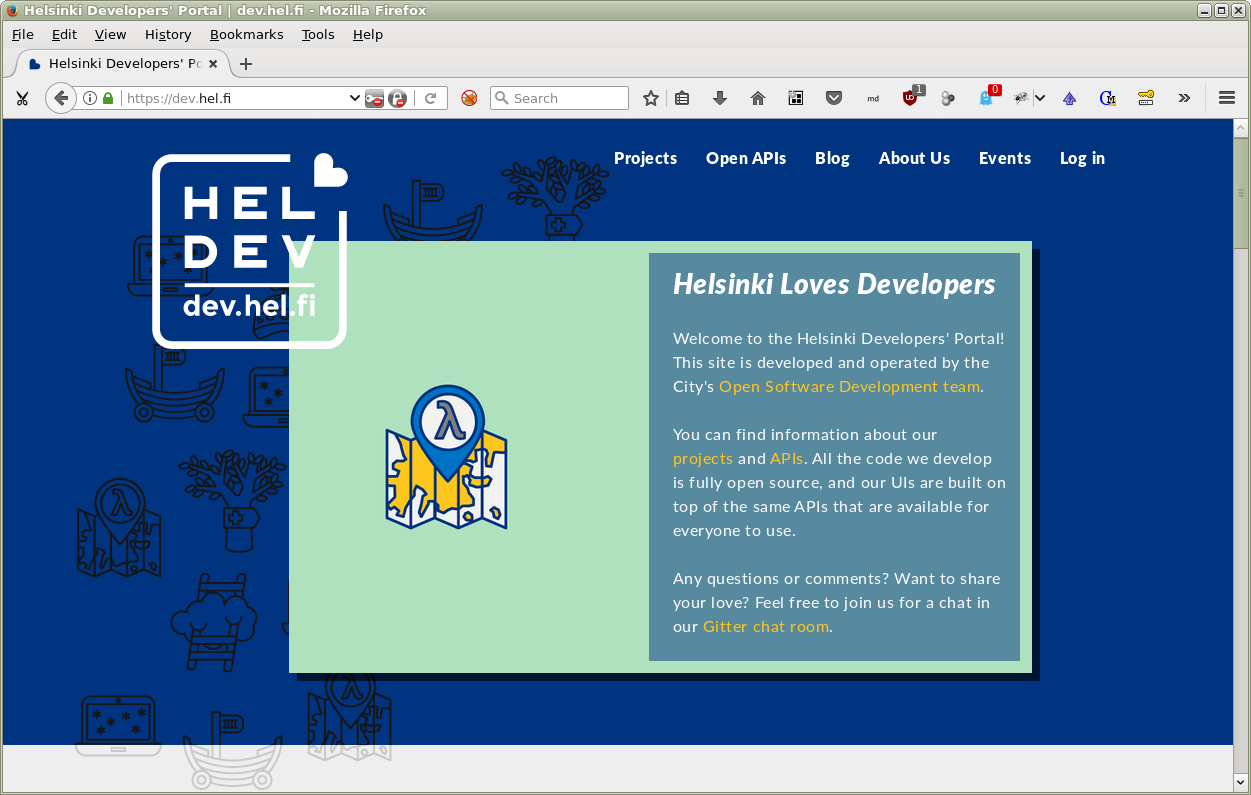 Each month, the City of Helsinki organises an Open Data Open Office where people working with open data — or simply interested in the idea — can meet. We will continue to organise these meetups to enhance the dialogue between citizen and the City to make people aware of open data as well as to gain more insight into the needs of citizens, developers and others, Lahti says. We will also continue our cooperation with stakeholders like applied science universities.

The main activity of the HRI service is to support producers in opening up their data, and to increase data utilisation through multi-channel communication. These are the service's four main tasks:

Work on the concept of the HRI service started in early 2010, and planning commenced in June of that year. The first version of the web service came online in March 2011. The project then advanced through user-based testing and learning. By 2012, the service offered a wide range of data on the Helsinki region.

In 2013, the goal was set to open more data and incorporate the HRI service into the municipalities' existing processes. This was achieved at the start of 2014, making the service an integral part of the region's civic operations.

The core of the HRI service is built on CKAN, the most popular platform for storing and distributing open data. The WordPress CMS is used for blogs, discussions, news articles and comments. These two open-source packages have been glued together to provide a seamless experience to visitors. For example, the authentication and authorisation services and the publishing and commenting functionality of WordPress have been integrated with CKAN.

The CKAN and WordPress platforms are hosted on Amazon's AWS cloud service in Ireland. The systems run on EC2 instances of Ubuntu Linux. The underlying open-source databases — PostgreSQL for CKAN and MySQL for WordPress — are deployed via Amazon RDS.

The HRI site provides a gallery showcasing almost 200 applications and services, including travel planners, historical maps, places of interest, tourist information, 3D maps and animations, population statistics, information on public transport, and all sorts of heat maps. Since most of the available data is statistical and geo-based, so are most of the applications. 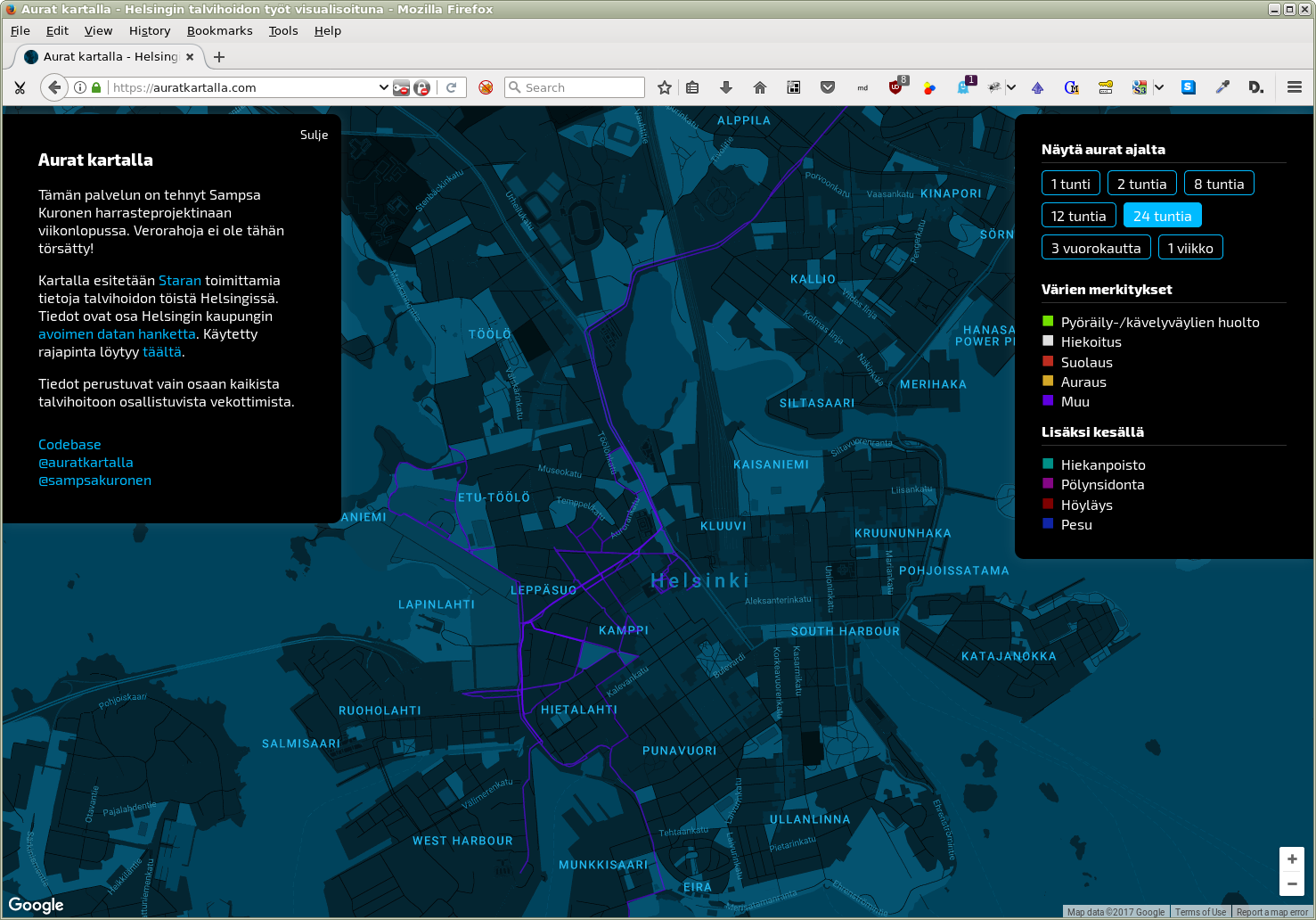 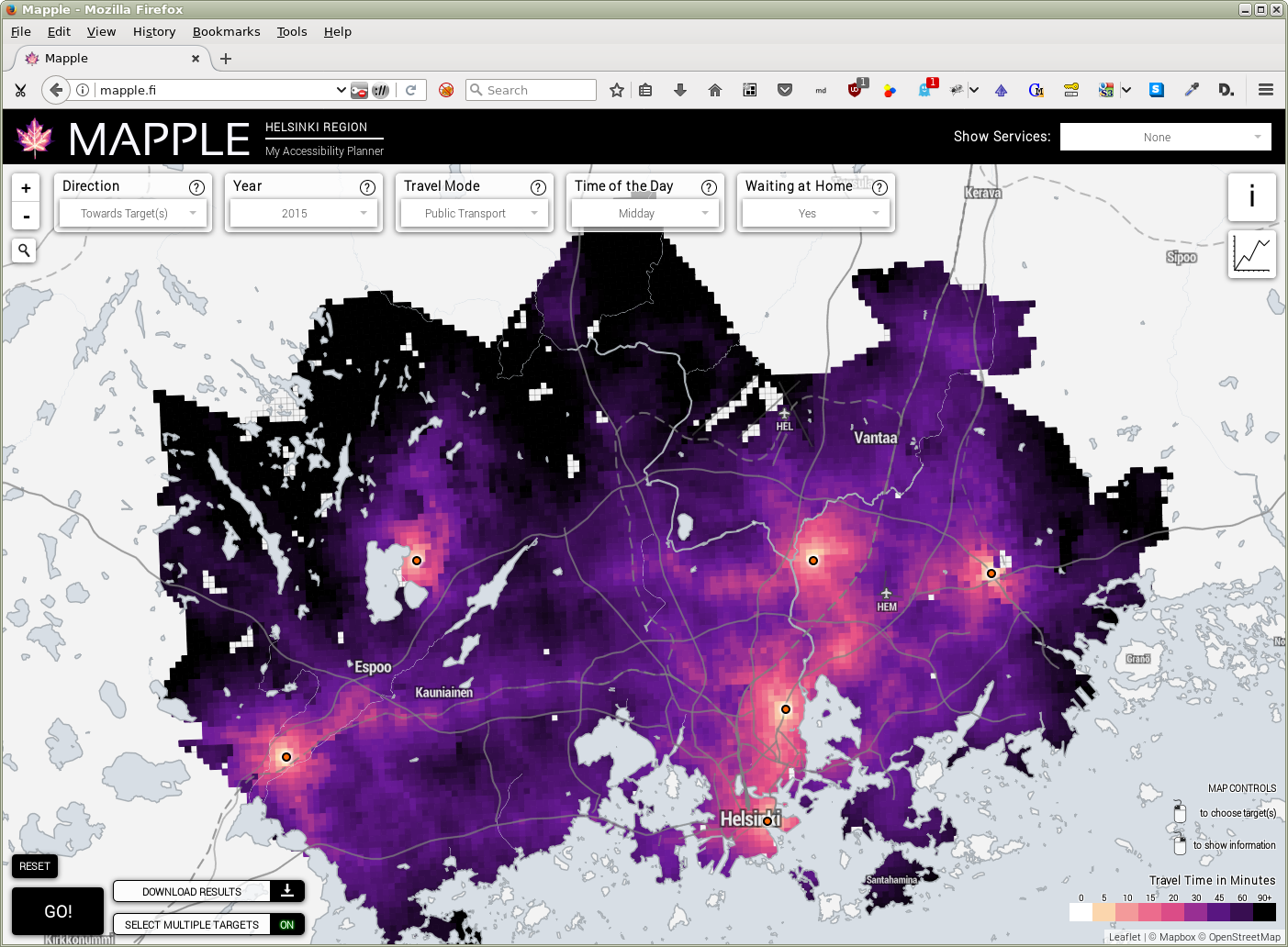 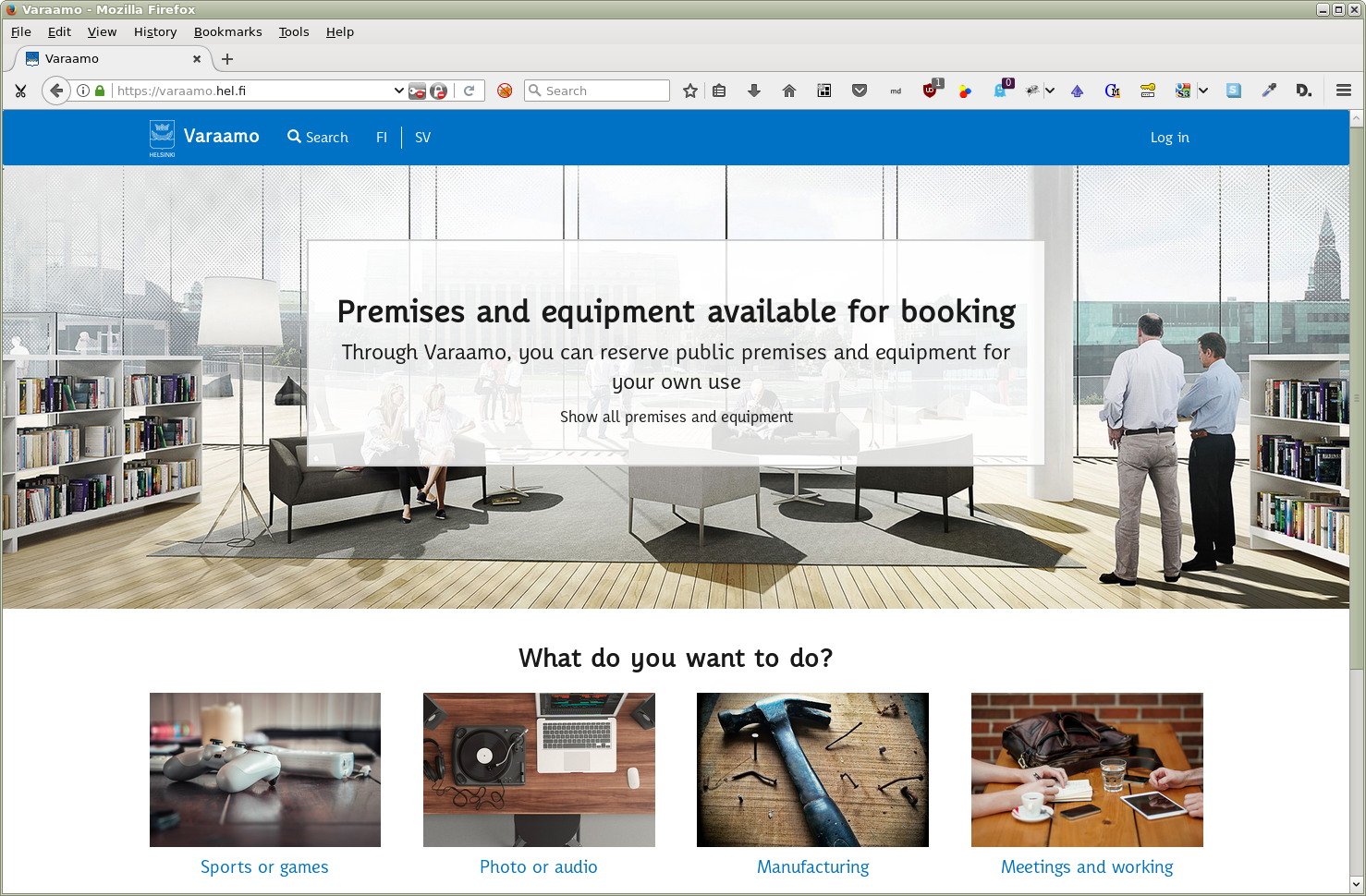 The City of Helsinki itself also uses its open APIs and open data, for example in the regional service map and the Päätökset service [providing localised information on political and legislative decision-making]. 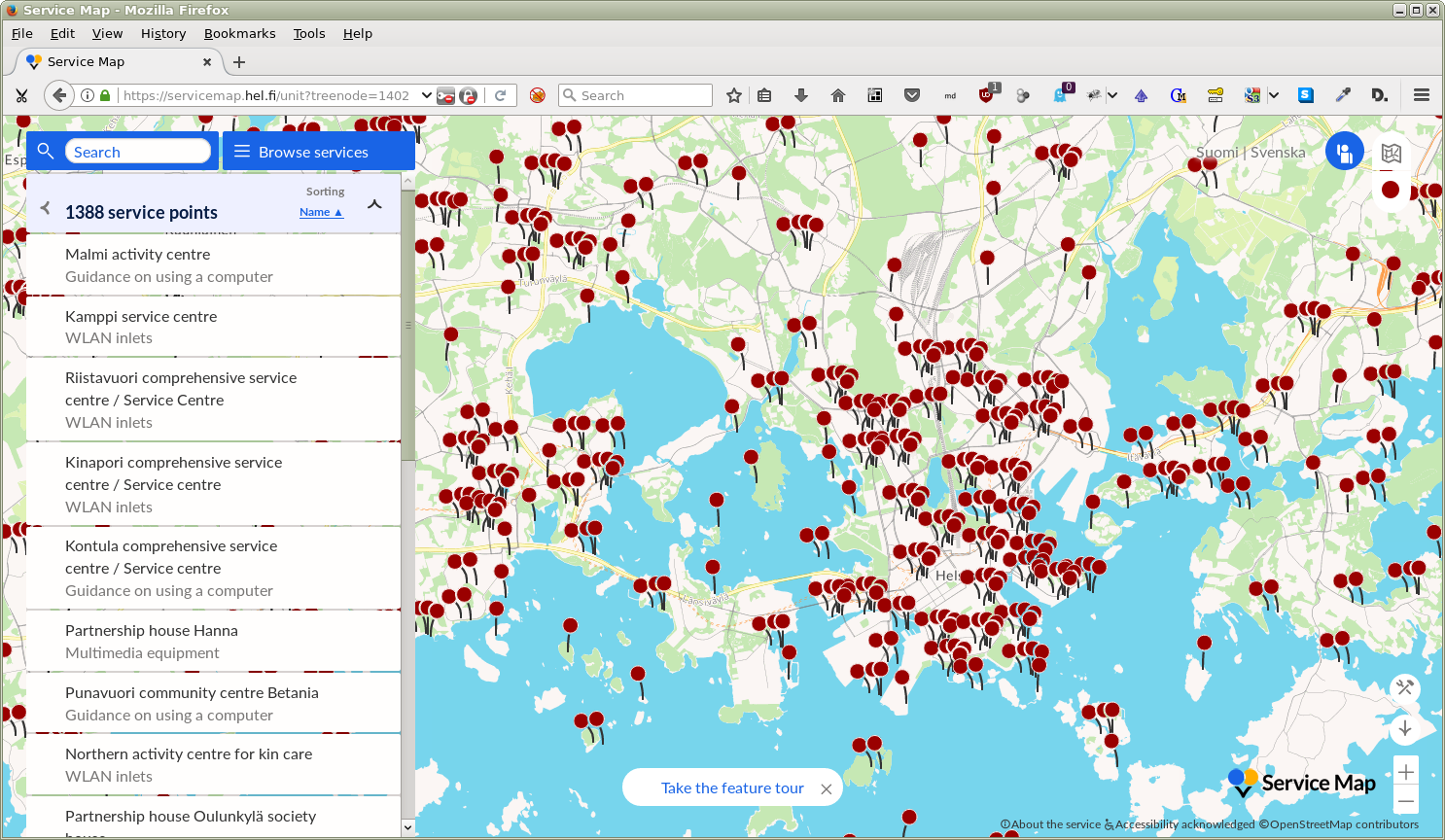 The HRI project cost around 1 million euros for the first two-and-a-half years that we were piloting and testing, Lahti says. That includes the cost of building the data catalogue, hiring people to manage the project, promotional events to appeal to the data producers and data users, and creating an open data licence which Finland did not have before.

Since going mainstream in early 2014, the annual cost of maintaining the catalogue and furthering the use of open data has been 60,000 euros, which is funded by the Cities of Helsinki, Vantaa, Espoo and Kauniainen.

From our point of view, this service is worth doing because the annual cost is relatively low for the benefits, like utilising the data more efficiently, savings in time and human resources, and providing or enabling better services for citizens.

The HRI service is funded by the Cities of Helsinki, Vantaa, Espoo and Kauniainen. In the planning phase, the project was also supported by SITRA, the Finnish Innovation Fund, as well as the Finnish Ministry of Finance through a municipality cooperation grant.

A board of directors, set up by the funding and executive parties involved in the service, is responsible for the operational part, together with the City of Helsinki Executive Office and Forum Virium Helsinki.

According to the City of Helsinki, just opening up the data has resulted in budget savings of 1-2 percent. Making lots of our city purchasing data public has opened up a new view for citizens into city administration, and increased people's trust toward the city and its officials, Lahti said.

The saving is an estimate based solely on opening up the city purchasing data, she adds. With the total transparency we have nowadays, civil servants might be a bit more strict with their procurements, and this might give us some savings. In addition, releasing and using open data via open APIs provides another way to save time and human resources.

The City of Helsinki has released data about its decisions, procurement, services, land use, etc. These all provide great opportunities to increase the involvement of citizens.

The City has not defined any Key Performance Indicators (KPIs) to measure soft returns. But we do have some simple indicators — such as website visits — to track the impact of our work. We'd like to find and use more indicators, though.

The project's middleware — the "glue" software used to integrate the CKAN and WordPress platforms — has been made available as open source on GitHub, along with the theme used for the portal.

We have redeveloped the code of this CKAN-WordPress combo in collaboration with other large cities in Finland under the 6Aika project, Lahti says. This renewed code will be adopted, among others, by the Cities of Tampere and Oulu.

The open data portal provides you with a platform, but you also need to do tons of work to actually get some data released, Lahti notes. Furthermore, you need to actively work with various stakeholders on common awareness of the project and the possibilities of open data.

In some cases it took quite some time to make civil servants understand the idea and benefits of open data, but sooner or later they got it. For the City it's crucial to have the open data alignments in order to actually make the change happen.