Soldi Pubblici ("Public Money") is an online portal that publishes details of all spending by Italian public bodies. It covers both central and local levels of government.

Citizens who visit the website can use keywords to check on expenditure by Italy's many public authorities, through a semantic search engine. The combination of the portal's functionality and the use of electronic invoicing in public administration — which has been mandatory since March 2015 — makes it possible to link every expenditure with a corresponding invoice, which contains details of the beneficiary and a description of the service or goods provided.

Opening up all public expenditure via a searchable web portal is a major shift in increasing the government's transparency and accountability. Although it is still too early to assess the impact and results from this initiative, if fully implemented it will be highly transformative. 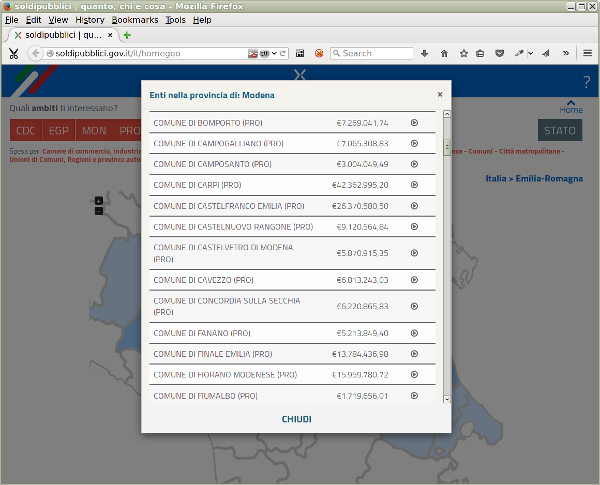 The Soldi Pubblici portal is based on the SIOPE database (Sistema informativo sulle operazioni degli enti pubblici; Information System on the Operations of Public Bodies) run by the National Bank of Italy (Banca d'Italia). SIOPE is a system for the online aggregation of information on the cash transactions, payments and collections made by every public administration treasurer. It is the result of a collaboration between the State General Accounting Department (Ragioneria Generale dello Stato), the National Bank, and the National Institute of Statistics (Istituto Nazionale di Statistica, ISTAT).

Central government has been involved in SIOPE since 2003. Regional and local authorities (for cities and towns of more than 20,000 people) and universities have been linked since 2006, and smaller local authorities since 2007. In 2015 the State General Accounting Department made access to the SIOPE database available to the public through the Soldi Pubblici portal.

The Soldi Pubblici portal was launched in December 2014, at the same time as the second Italian OGP Action Plan was released. The central themes in the plan for the period 2014-2016 are participation, transparency, technological innovation, integrity, and accountability. Opening up the SIOPE database to the public was the third action in this plan, under the catchline "Follow the money".

According to a spokesperson at the Agency for a Digital Italy (Agenzia per l'Italia Digitale, AgID), however, the origins of Soldi Pubblici pre-date the Action Plan. The inclusion of the portal in the plan is justified by its potential and meaningfulness. But the added value of putting it into the Action Plan to the commitment that already existed is unclear.

According to the spokesperson, the "Follow the money" action aims to increase the usability of the SIOPE data by creating communities, communication initiatives, and provision of training for data reuse. Citizens can enter the website and use keywords to find expenditures of the many public authorities through a semantic search engine.

According to the AgID spokesperson, not all public administration entities are yet part of the Soldi Pubblici project: Small municipalities in particular are having a hard time finding the resources to implement this initiative.

According to our OGP Midterm Self-Assessment Report, the Soldi Pubblici website received more than 1.5 million hits per month, said the spokesperson. This initiative has raised awareness about the open data ecosystem and is seen as an innovative way to fight corruption, although it is still too early to find evidence on the use of the tool.

The combination of the portal functionality and electronic invoicing in public administration — obligatory since March 2015 — makes it possible to link the expenditure with the invoice, which contains details of the beneficiary and a description of the service or goods provided.

The AgID spokesperson emphasises that the commitment from the OGP Action Plan, while ambiguous, seems to focus on the Soldi Pubblici tool itself. To that extent it has been completed and is fully functional. The portal receives its underlying data from the SIOPE system on a weekly basis and is upgraded regularly. Ongoing efforts are made to include all public administration bodies in this initiative.

According to the spokesperson, opening up all public expenditure via a searchable web portal is a major shift towards increasing the government's transparency and accountability. The Soldi Pubblici service is provided for free, and reuses open data. Its potential impact is transformative, for it allows you to track individual payments and link these to electronic invoices and public contracts.

Although it is still too early to assess the impact and results from this initiative, if fully implemented it will be highly transformative. Like many other open data projects, the challenge this initiative has in achieving its full potential is the level of engagement. What citizens, civil society organisations and journalists can achieve from this tool is closely related to their capacity and motivation to use it. We currently have nothing planned to increase awareness, but the portal is linked from several government websites.

According to the AgID spokesperson, the implementation and operational costs of the Soldi Pubblici portal total about 100,000 euro to date. Most of the work has been in the visualising the data.

This summer, the Soldi Pubblici initiative was acknowledged as a "star" commitment by the OGP. Strengthening fiscal transparency through the Soldi Pubblici website can rebuild public trust by showing citizens how the government conducts business, say the authors of the evaluation report 'Star Reforms in the Open Government Partnership'. When complemented with the establishment of an active community of users, the online platform becomes a powerful monitoring and oversight mechanism to bolster government accountability. For example, it could allow civil society advocates to track specific payments to electronic invoices, public contracts, and individuals, with the goal of uncovering fraud, waste, and corruption.

This one of the best initiatives adopted by the government and AgID [the Agency for a Digital Italy, L'Agenzia per l'Italia Digitale] to achieve the OGP objectives, the AgID spokesperson concludes. IRM researchers recognise the value of this initiative and recommend various actions to be incorporated in future Action Plans, shifting the focus from the tool itself to the usability of the tool.

The actions suggested by the IRM researchers are:

A similar (but wider) initiative is Called OSP OpenSoldiPubblici which link is https://www.opensoldipubblici.it
It shows not only data about municipalities but also on Universities, chambers of commerce, parks, provinces, etc