Starting today, people will be able to collaboratively write a new European Constitution. The People's Constitution project is an initiative of the Dutch Pirate Party and Amsterdam civil society. It aims to crowdsource an alternative to the Treaty of Lisbon, one of the three treaties forming the constitutional basis of the European Union.

Democracy can and should be much more interactive, using modern tools, the initiators say. We believe that people deserve the responsibility to really participate in all forms of decision making. Europe is the perfect example of how technocrats prefer to use less democracy because it makes it easier for them. Well clearly it has not worked.

The People's Constitution project was inspired by the constitutional reform that took place in 2011 in Iceland. A proposal for a new constitution created by the newly appointed Constitutional Council was put to a non-binding referendum, where it won the approval of two-thirds of the voters. The bill, however, was never enacted, because the government's term ended.

We want to show the European Parliament that people can work together to shape a European future, the initiators of the People's Constitution project say. The goal is to work together with people from all over Europe to create a manifesto. We want politicians to look at what we’re doing and get on board.

The People's Constitution platform is currently empty. It features a forum where ideas can be submitted and discussed, a wiki where a draft constitution will be created, and a small collection of constitutions that can serve as an example and inspiration. The project will be officially launched on 26 May in Amsterdam. 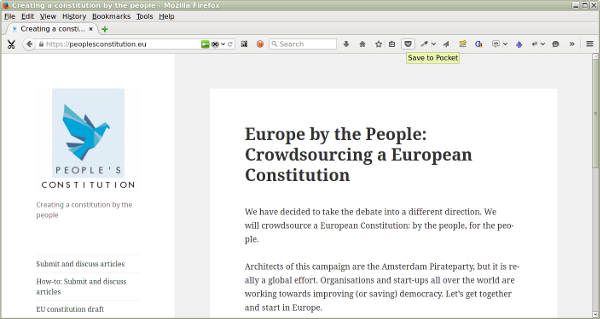