The Dutch Ministry of Internal Affairs has published a new version of its 'Handleiding Wet hergebruik van overheidsinformatie' (WHO; Manual for the Law on the Re-use of Public Sector Information).

Thirty questions and answers, and two flow charts, guide the reader through the implications of the law, clarify the differences between this law and the Dutch Freedom of Information Law ('Wet Openbaarheid van Bestuur', WOB), and explain how to handle requests for public sector information. 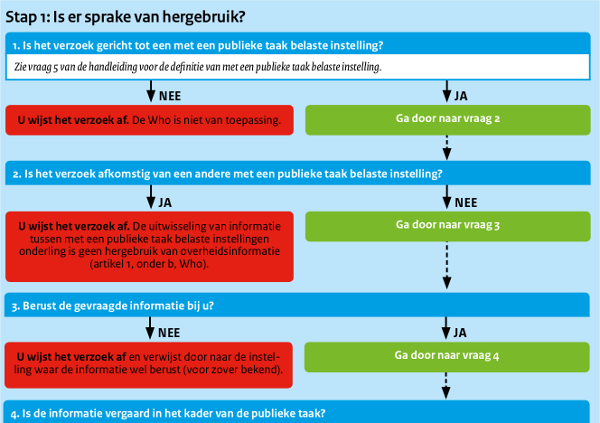 The WHO is the Dutch transposition of the European 'Directive 2003/98/EC on the Re-use of Public Sector Information' (i.e. the PSI Directive). This Directive was revised in June 2013, and its amendments were implemented in Dutch national law in July 2015.

The PSI Directive encourages governments to make available for re-use as much public sector information as is reasonably possible. That way, data generated and collected by governments can be re-used by companies to feed and create digital content products and services, and facilitate learning and insight by citizens. The Directive provides a framework to stimulate the internal market, and to do so without disturbing competition.

Three years ago, the original Directive was amended by Directive 2013/37/EU to cover developments in open government data and cultural heritage information. With regard to the latter, the Directive now also includes documents held by (university) libraries, museums and archives for which governments hold intellectual property rights.