Dear users, a new Joinup release will be deployed on Thursday 09/02/2023 between 13:00 and 13:30 CET. Within this time window, the site might experience outages. Please adjust your use of the platform accordingly during this time frame.

Last week, the Dutch society-driven political movement GeenPeil started its own political party, promising its members direct democracy through what it calls remotely controlled Members of Parliament. Every week, the party's members will be asked for their opinions in "mini-referenda" on the votes that take place in the Dutch Parliament. Their (anonymous) votes will determine the voting behaviour of the party's Members of Parliament, thereby emulating direct democracy in a representative parliamentary system.

The GeenPeil movement gained international notoriety last year when it called for a referendum on the Dutch ratification of the Ukraine-European Union Association Agreement. Despite an uncooperative political establishment [1, 2, 3, 4, 5], GeenPeil managed to get the public support required for a valid advisory referendum, which took place last spring. The outcome, a 61 percent no vote, has resulted in a stream of political pressure and negative publicity for the current Dutch Prime Minister Mark Rutte, who hopes to retain his position after the parliamentary elections in March.

On the one hand, the GeenPeil initiative is one of the outcomes of a growing dissatisfaction with the traditional political establishment in the Netherlands, as are the expected electoral gains of Geert Wilders' populist Party for Freedom (PVV) and the birth of several other political initiatives [1, 2]. On the other, it is a consequence of an increased visibility of the political theatre, as well as a society-driven political innovation bringing more transparency and enabling participation.

Piet Hein Donner, Vice-President of the Council of State, called the GeenPeil initiative the end of the democratic constitutional state. Decisions taken in this way will be dominated by activists and radicals. They can, in the long term, lead to large costs and great harm to the whole of society. Earlier this year, Donner said the same thing about referenda, calling these unconstitutional and a threat to democracy. 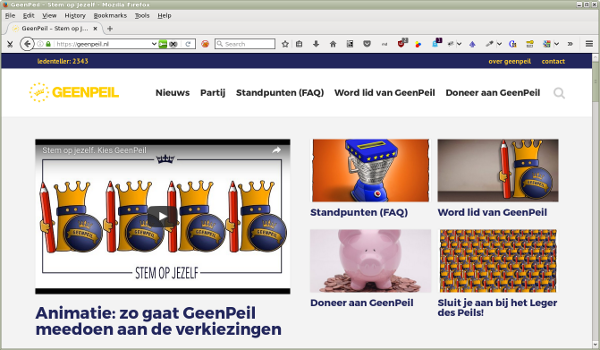