Migration of the German City of Schwäbisch Hall

In the year 2001, the German city of Schwäbisch Hall reached the decision to migrate to Open Source software aiming to reduce software costs as well as to decrease dependences from software companies.

The municipality of Schwäbisch Hall in Germany is, with its 36 000 inhabitants, a medium-sized commune in the federal state of Baden Württemberg. The administration of the city is located in different buildings within the city. Four administrators are responsible for 225 networked workplaces, used for simple administration tasks up to geo information tasks.

At the Linux World 2001 in Frankfurt, the city announced to realise a migration to Linux and open source software. The city decided to migrate both servers and desktops. Especially the introduction of a central administration that can handle Windows and Linux based clients as well as the use of multifarious applications within the departments was be challenged by the city. The central administration was realised by an OpenLDAP system. Applications were ported to centralised servers and can be used like before with the aid of gateways.

In 2001, the software company Microsoft announced that the support for the used operating system Windows NT 4.0 will be phased out. At this point of time, employees worked with Microsoft’s office suite Office 2000 and the date for the ending support of this product was also not clear. Microsoft advertised already the new products Windows XP and Office XP. Consequently the municipality had to think about an upcoming migration. To reach a decision, the city had to deal with considerations about alternative software products, budget restrictions and when and how a migration could be realised. Due to decreased tax receipts, the IT department was called on to come up with suggestions aiming to cut expenses. The project “Linux im Rathaus” was born and should reduce costs, decrease dependences from software companies, enhance security and encourage competition.

The commune decided to encourage open source software and open standards particularly due to the following reasons:

The ending support of the software company Microsoft forced the municipality to an implementation of new software products. A migration to new Microsoft products would have arisen license costs of about 250.000 € for the following two years. Furthermore the city wanted to decrease dependences from software companies to choose the rhythm of investment independent instead of a dictated software investment by software vendors.

Moreover, the system requirements for the use of new Microsoft products did not comply with the IT-environment. Used hardware was renewed in 1997/98 and did not meet the requirements. Systems would have to be upgraded.

The lack of gateways of the used applications within the administration for new Microsoft based software products, some applications were developed in the 70s, constituted further migration disadvantages of proprietary solutions.

Besides the protection from viruses and other intruders, the following security aspects are, according to Horst Bräuner, person in charge of IT, essential for public administrations.

The city of Schwäbisch Hall expects that the numerated security attributes have to be integrated into operating systems and not need to be added by additional software licenses belatedly.

Since 1997, the municipality uses open source software for its administration servers. Open source based applications and operating systems are inserted for DHCP-, DNS-, Print and Database-Servers. According to the municipality, the used hardware had not to be changed since 1997. Little administration effort stood also for Linux. Based on the experiences within the server environment, the city calculated cost savings of about 500 € per workplace by open source software use. Costs for training were not considered – a migration to proprietary software would have caused similar costs.

On grounds of the described arguments, the city came to the decision to realise the shift to open source software.

The migration of the municipality to open source software should conform to the following requirements:

With regards to this decision, a migration concept plan was elaborated by the municipality with the aid of the know-how of two external companies – Suse/Novell and IBM.

In December 2001 the city of Schwäbisch Hall arranged the migration schedule. The migration of workplaces started in summer 2003 and should be finished by end of 2004. A creation of a detailed schedule was unworkably due to the lack of migration experiences. The migration process was divided into two phases – the server and the desktop migration. The approximate schedule permitted flexibility during the migration.

Key to the success of a migration is a well-defined communication and information policy between the migration team and end-users. Employees of the municipality had the possibility to try open source applications - like the office suite OpenOffice.org, the web browser Mozilla or the graphic editing application - Gimp at home. The goal of the information dissemination was to decrease employee fears and reservations about the use of open source software.

Schwäbisch Hall started to introduce a central administration system running with OpenLDAP (Lightweight Directory Access Protocol) that can handle Windows as well as Linux clients. This directory service was combined with the data file open source server application Samba aiming to provide a Primary Domain Controller as a server that allows a login for Microsoft Windows clients. Linux clients can directly sign on the LDAP-server. 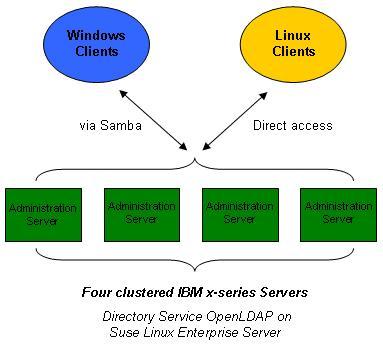 The shift of all workplaces to open source office applications was realised simultaneously to the introduction of the new groupware software. OpenOffice.org was chosen to run on the clients – also on Microsoft Windows clients during the transition period.

Data from the use database application Microsoft Access was ported on a central MySQL system. A web based interface provides data access. Data can also processed under OpenOffice.org using the ODBC API for MySQL. Exceptionally the proprietary database MS Access was installed on Linux clients via the commercial Windows-Emulator CrossOver.

Due to the Linux and Windows environment the municipality decided to use a web based e-mail and calendar solution. Slox (Suse Linux OpenExchange Server - Open-Exchange) is used for these tasks.

The municipality used a total of 84 different applications needed for administration tasks before the migration. The majority of applications run as single application on the desktop of a few users. The used applications can be categorised into the following groups.

ASP based applications could be migrated without big effort. Needed client components were available for Linux operating systems.

The municipality could find for most client-server based applications alternatives that can be used under Linux.

Due to numerous used applications, software alternatives were not available for every required task. The department of IT decided to migrate non-replaceable software to a MS-Terminal server and to use a general client for desktop workplaces.

To minimise administration efforts - within the Windows and Linux environment during the transition – the municipality uses the open source based Terminal server NoMachine. The terminal server provides client components to all available platforms – Windows, Linux or MacOS. An afterwards replace of Windows software does not cause administration efforts.

The general client is used for two tasks.

1. The NoMachine client connects through a portal to Linux or Microsoft servers and requests for the required task – place of the application is transparent for clients. If a Windows application migrates to a Linux server, clients are provided automatically with the new application.

2. Due to its high-performance characteristic, the used NoMachine client brings the possibility to access applications via numerous types of connections – also via low frequency connections like GPRS. The municipality is not depend on a specific infrastructure and can provide services everywhere.

The migration process of the municipality was made with a minimum of costs. New hardware was not intended for the shift. To realise the migration, the municipality obtained 40 personal computers that could be used for the first replace process. The technical capability of Microsoft Windows desktop systems was inspected aiming to state further insert. The Suse Linux Desktop operating system was installed on positive reviewed systems. During the migration, employees from the different departments were indoctrinated. The trainee contained among other things the use of the Linux desktop as well as information about differences between OpenOffice.org and Microsoft Office use. The course of instruction took about one to two days. After this time, employees could return to its workplace and could resume work on the new system. Further questions regarding new system use were responded by employees of the IT-department. A hotline was established. Questions and problems were collected in a database to measure training success and to revise the training concept.

Due to a from the IT department independent organisation, the migration to open source software did not come along with organisational improvements of the IT environment.

The migration decision of the city provoked public interest. Particularly communal centers of IT were interested in collaborations. Partnerships with the industry and Linux organisations were initiated.

Within the scope of the migration process, the city evaluated further IT projects. At this point of time, the municipality experiments with mobile citizens services. Access to administration tasks will be provided via the existing mobile network. Furthermore the IT-department evaluates the use of thin clients. If the field test will succeed, the use of thin clients within the main administration would be evaluated by the city.

At this point of time, the migration is a success. All central administration and technical departments use new open source based systems. The NoMachine client allows to use open source as well as proprietary software on Windows and Linux systems and guarantees that proprietary software can be replaced by open source software without big administration efforts belatedly. The migration of the city of Schwäbisch Hall exemplifies that an environment handling proprietary as well as open source software seems to be a good decision for a successful open source implementation process. The successful migration of the German city of Schwäbisch Hall can be seen as a motivation for further cities!

© European Communities 2005
Reproduction is authorised provided the source is acknowledged.
The views expressed are not an official position of the European Commission.
Disclaimer