This is the third of a series of five studies exploring the sustainability of open source software communities in the public sector.

In 2019, the City of Groningen started a new participatory democracy project following the successful launch of the Stem van Groningen (Voice of Groningen) platform. The new project was designed with the aim of giving citizens more decision-making power in relation to their locality. On the advice of the Dutch Ministry of Interior’s Digital Democracy Lab, the city of Groningen decided to use open source software. To host the platform, the municipality considered three open source online participatory solutions: CONSUL, YourPriorities, and OpenStad. Ultimately, the municipality chose CONSUL as it had the most relevant functionalities. CONSUL offers an open source digital platform and an app for participative democracy used by local governments and organisations. While Voice of Groningen is an independent public sector-led initiative in its own right, over time, the City of Groningen began to contribute to the existing open source community that had already been built around the CONSUL software.

CONSUL was initially designed by the Madrid City Council in 2015. The platform had the primary objective of allowing public institutions to carry out democratic participatory processes and make them accessible at different levels, including among local authorities, and regional and national governments. Now used by 140 institutions in 35 countries around the globe, CONSUL is one of the most advanced solutions for participative democracy.

To learn more about the sustainability of Voice of Groningen platform, OSOR spoke to the City of Groningen’s Digital Democracy Project Officer, Nephtis Brandsma, and the former City of Madrid’s CONSUL Project Leader, Miguel Arana Catania. 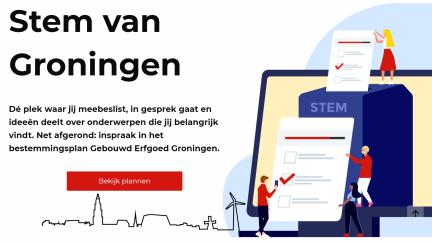 COMMUNITY AT A GLANCE

Based on the CONSUL open source software, the Voice of Groningen platform and app has an ‘area-oriented’ approach, in the sense that it aims to give citizens more decision-making power in their locality. The digital platform is meant to serve as a complementary tool to the physical municipality meetings, rather than a replacement. According to Nephtis Brandsma, this initiative allowed the municipality to broaden its outreach, especially among disabled citizens and young adults. Local residents can submit ideas and vote on which projects should be implemented. Between October and December 2019, Groningen citizens had the opportunity to distribute a neighbourhood budget of EUR 25,000 on projects that they deemed to be most important. The city of Groningen is currently working on a similar project in the southern part of the municipality, with a budget of EUR 35,000.

Like the CONSUL software, the Voice from Groningen fork is freely available under a GNU Affero General Public License v3.0, in a GitHub repository. Developed in Ruby, the solution is easily customisable while the risks of damaging the core part of the software are limited. CONSUL is also a secure solution as it features a registration system that protects the privacy of users in line with the General Data Protection Regulation. The Groningen fork allows users to make proposals for participatory budgeting, vote for their preferred options, directly decide how to spend part of the budget, contribute to collaborative decision-making, share informative documents, and comment on such documents.

To develop and maintain the platform, the municipality of Groningen can seek support from the responsive CONSUL open source community through Slack and consult the extensive documentation available both on the CONSUL website and on GitHub.

The adoption of CONSUL by the City of Groningen

In 2017, the city of Groningen participated in the ‘Local Digital Democracy Lab’ (henceforth: the Lab) initiative organised by the Dutch Ministry of the Interior. The Ministry developed a sandbox approach whereby new participatory democratic tools, preferably based on open source software, would be tested at the local level. In the framework of this governmental initiative, municipalities were able to work together to experiment with online participation and exchange lessons learned. Thanks to the Lab, Groningen reached out and began collaborating with other municipalities using CONSUL. As mentioned in the Digital Democracy guide published by the Ministry of Interior in April 2020, functional managers across the municipalities helped each other with questions, and project leaders advised one another on different participation processes. As part of this collaborative effort, the municipalities have also applied for funding to work together on the further development and improvement of the fork of CONSUL.

In light of the Cooperation Neighbourhood Council’s success, the Municipality of Groningen decided to launch a larger-scale participatory democratic initiative on the Stem van Groningen platform in October 2019. For the first large-scale action of the Voice of Groningen platform, citizens were presented with the opportunity to allocate a EUR 25,000 budget for the improvement of their neighbourhood. Between October and December 2019, citizens could submit ideas and/or vote for their preferred projects to be implemented in the area. The municipality also organised a series of physical meetings where citizens could exchange and develop their ideas. The consultation resulted in the adoption of 11 proposals, following a vote on the Voice of Groningen platform. The proposals are now being implemented by the City of Groningen in close collaboration with the citizens.

The work carried out by the City of Groningen is gradually being picked up on across the globe, partly due to the City’s partnership with the European Union’s Like! project, which allows them to disseminate the lessons learned from the Cooperative Neighbourhood Council and the Voice of Groningen initiatives. The Cooperative Neighbourhood Council initiative gained further international recognition after being awarded the European Innovation in Politics Award 2019.

The origins and growth of the CONSUL software

The CONSUL project was launched in Madrid in 2015 by the newly elected Ahora Madrid party. A core tenet of their political ideology centres on participatory democracy. The project materialised with the launch of the Decide Madrid platform based on CONSUL software. It allows citizens of Madrid to voice their opinion on various matters, ranging from the City budget to proposals for new regulation.

The popularity of CONSUL has spread rapidly across Spain and consequently around the globe. There are now more than 100 programmers across the world producing code for the initial version of CONSUL and 550 different forks of the software. The working community currently consists globally of more than 580 programmers and citizen participation public servants. According to Miguel Arana Catania, the CONSUL software is currently being used by more than 140 public administrations or organisations in 35 different countries. Since 2018, the project has been widely recognised internationally It won the United Nations Public Service Award 2018 and the 2nd prize in the Open Source Software with the Biggest Impact on Businesses and Citizens category of the European Commission’s 2019 Sharing and Reuse Awards. For Nephtis Brandsma, these awards were the sign that CONSUL was a mature tool to reuse.

In April 2019, the CONSUL community established the CONSUL Democracy Foundation, a non-profit organisation whose mission is to ‘reinforce the quality, neutrality and credibility of citizen participation worldwide in democratic process embodying the principles of democracy, independence, open source and free software and knowledge, neutrality, transparency, rule of law and inclusion; as well as manage and contribute to the improvement, development and worldwide expansion of the open source free software CONSUL’.

The successful implementation of CONSUL in Groningen is a testament to the success of this public sector open source software project. With regard to ensuring sustainability, our interviewees believe that an open source community looking to develop a similar public sector project should focus on the following five points:

Aside from the aforementioned importance of keeping the software up-to-date, fostering the vibrancy of the community and focusing on the reusability of the solution, both Nephtis Brandsma and Miguel Arana Catania had insights to share regarding the lessons they have learned in relation to the development and implementation of open source software in the public sector.

Firstly, the most important sustainability factor mentioned by our interviewees was promoting the solution to ensure constant growth of the user base. The CONSUL team adopted an active strategy, directly contacting other public administrations that could potentially be interested in using the software. Not only does this ensure the growth of the user base, but it also allows the community to decrease its dependency on a sole contributor.

Secondly, the interviewees believe that positivity and collaboration are important elements that contribute to the sustainability of an open source project. This is something that made the implementation of CONSUL in Groningen particularly smooth. Collaboration in the framework of an open source community is different than working with another company – it is important to foster a horizontal and cooperative environment. By the very nature of open source software, individuals are doing things for other people, therefore one needs a collaborative mindset and a general sense of willingness from the involved actors.

Thirdly, the CONSUL team underlined the importance of getting the support of decision-makers in order to enlarge the software’s user base and involve new public administrations. For that purpose, open source communities’ representatives need to explain the advantages of using open source software to decision-makers in terms of transparency, price, and prevention of vendor lock-in, among other benefits. Most importantly, it is essential to make sure that decision-makers are aware of the specificities of open source software, in comparison with proprietary software, as it would allow them to take into account the long-term benefits of an open source project.

Additionally, Nephtis Brandsma underlined that civil servants involved in an open source project could benefit from additional technical expertise either from an in-house developer or by subcontracting an external expert, as was the case with the Voice of Groningen platform. The support from professional developers would help the public sector project leaders understand the technical aspects of open source software. A best practice shared by the interviewee is to communicate with the open source community and make the most of its expertise. It is therefore essential to ask questions and share any problems that may arise when installing and using the software.

Finally, on the developer side, Miguel Arana Catania shared the importance of publishing the source code early to maximise its open source characteristic and encourage as many developers as possible to contribute to the project.