A Centre for Digital Sovereignty

The German government is taking the next steps to fulfil its commitment of increasing the level of digital sovereignty of its public sector. In a recent decision, the Conference of the IT Coordinators of the Ministries approved the “Strategy for Strengthening Digital Sovereignty for Public Administration IT”, with a view of creating a Centre for Digital Sovereignty, built on open source.

With the publication of a study in 2019, the German federal government already showed an increased awareness of strategic dependencies on a low number of IT suppliers. The study identified  the increased cost, lock-in and reduction in autonomy as negative consequences of these dependencies. This push was furthered by a joint paper of the federal CIO, the IT-Planning Council and the IT-Council outlining the goals and areas of action in order to improve the level of digital sovereignty.

Now, after first identifying challenges and goals, the German federal CIO put forward a organisational concept for a Centre for Digital Sovereignty (ZenDis, working title) in April to the Conference of the IT Coordinators of the Ministries and the IT-Council for approval, which outlines a concrete action to achieve this. The bodies endorsed the project and said the centre is “to become a central coordinating body for the promotion of Open Source Software (OSS) in the public administration. For the future, the field of activity of the ZenDiS (working title) is to be expanded in later stages in order to address further building blocks of digital sovereignty”. The German government is building an Open Source Programme Office (OSPO).

The concept outlines the issues currently observed, how open source contributes to addressing these issues and which challenges need to be addressed to achieve a successful implementation. Following this, the vision and mission are outlined and the concrete tasks of the centre are outlined. According to the document, the ZenDiS aims to achieve five main goals:

Thus, the centre is an ambitious concept to strategically make us of open source software for the German public administration. By using the coordination infrastructure of the IT-Planning Council between the federal level and the regional level the actions are being aligned and synchronised between the vertical government levels. 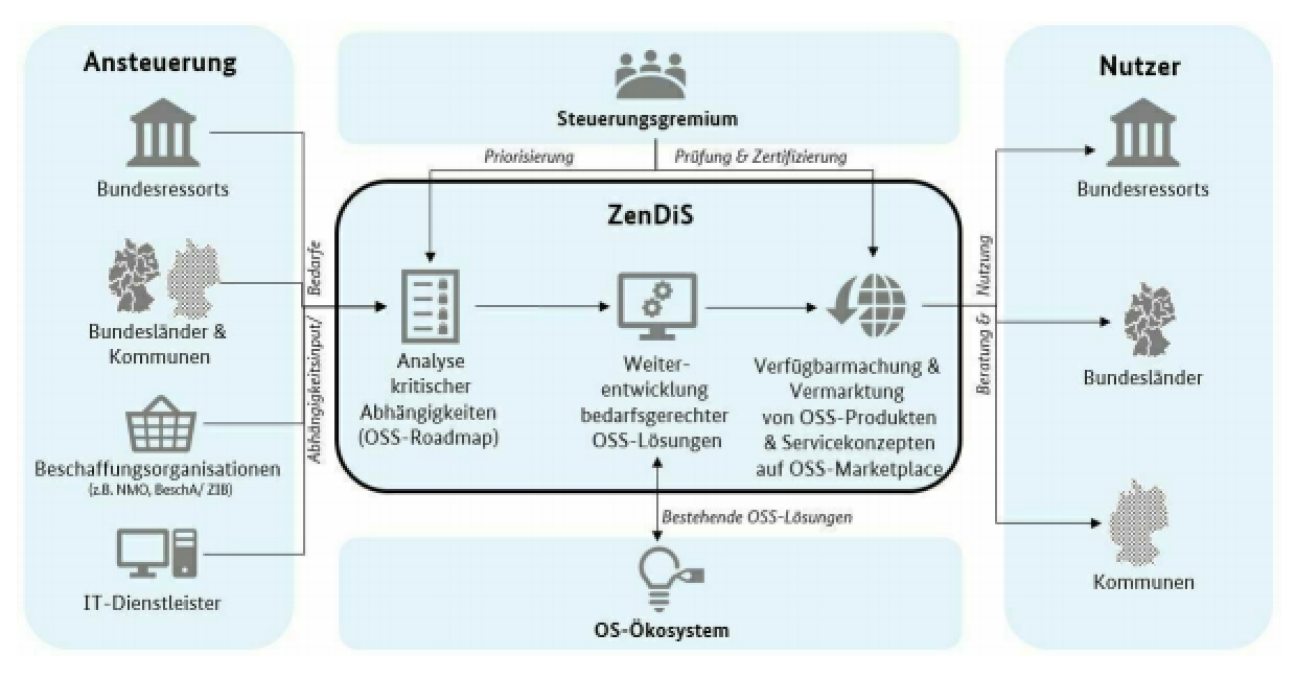 The paper also clarified the concrete tasks and outputs of the centre within the government strategy:

With the approval, the IT-Planning Council tasked the working group “Cloud Computing and Digital Sovereignty” to coordinate the implementation of the decision, develop guidance documents and keep the Council informed about developments.

With regard to the code repository, the Markus Richter, State Secretary at the Federal Ministry of the Interior, for Building and Home Affairs and federal CIO, announced in May that the development of the platform had begun in collaboration with the competent ministries in North-Rhine Westphalia and Baden-Würtemberg and Komm.ONE, the public IT service provider of Baden-Würtemberg. Richter said: “Open source is an important building block for strengthening digital sovereignty. We want to create a place where federal, state and local governments can easily and securely co-design, share and reuse open source public administration software.”

Open source also plays a major role in the third German national action plan (2021-2023) as part of the Open Government Partnership. The plan outlines open government milestones, many open source related, such as Corona-Warn-App and which actions will be taken to further the goals of the cross-government initiative, among them the Centre for Digital Sovereignty.