Sign language has its own grammar, which might be far from the local spoken and written language. Word-to-sign databases include deaf people and help people who wish to learn sign language (for instance parents of deaf children). Governments are called upon to promote open source in this domain. 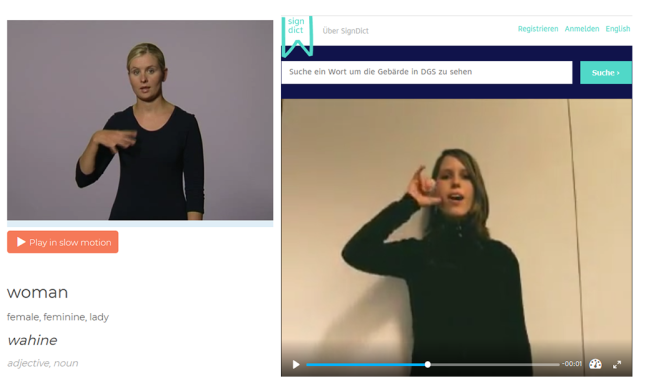 Word-to-sign concerns people who have hearing disabilities and allows connecting written words to sign language. As sign language is one hundred precent visual with its own grammar, it is not a given that deaf children can access written language as their hearing peers do.

Once sign language is seen and certified as a national language alongside the spoken and written forms, this opens to an inclusive society. Sign language databases are part of this acceptance. For instance, in New Zealand there are 5.000 deaf persons, but 25.000 people use sign language, such as the parents of deaf children.

Signs are not universal, and there is a myriad of local and national varieties. As a consequence, there are many websites and apps for different languages. You can visit the following links to see how the English word ‘woman’ differs from the German equivalent ‘frau’.

The German sign language became an official national language in 2002. In the EU, the Brussels Declaration of 2010 recommended that the Member States ought to recognise their national sign languages at same level as spoken and written languages.

Like buying an online course for a spoken language, it is possible to find proprietary websites and apps to learn sign language. But there are also free and open source databases, which are constantly updated, because just like spoken languages are fluent and regularly enriched, so is sign language.

Two notable open source word-to-sign dictionaries include the New Zealand Sign Language Dictionary (NZSL) and the German SignDict. Both have been supported by the government and have copyleft licences on their software and a creative commons licence CC-BY-NC-SA on videos and other content.

It is for everybody

“Certain signs are known to be used more by one generation than another, in which case the entry will indicate ‘older’ or ‘younger’ use”

The above quote comes from NZSL’s website. Since language is everchanging, it is an advantage to be on an open licence, where everyone can contribute.

Both projects have roots in public partnerships. The support that kick-started the SignDict project was the German Federal Ministry of Education and Research. NZWL is partnered with a university department. It has a legal code of its own; Deaf Studies Research, Victoria University Wellington, New Zealand.

And as SignDict proudly states:

”Everyone is invited to join in. 5508 signs have been added by awesome users.”

Like buying an online course for a spoken language, it is possible to find proprietary websites and apps to learn sign language. But there are also free and open source databases, which are constantly updated, because just like spoken languages are fluent and regularly enriched, so is sign language.

Both of the NZSL and the German SignDict have copyleft licences on their software and a creative commons licence CC BY-NC-SA on videos and other content.

The software part of NZSL has a GNU Generel Public Licence v3.0 (kilde: ) and SignDict has MPL 2.0 licence.

The fact that NZSL and SignDict are open source, gives everyone the possibility to participate in improving the websites (NZSL & SignDict), the app (NZSL) , the API (SigDict), the documentation as well as the database content itself.

The sign-to-words database of NZSL has more than 4.500 signs and pictures or videos and it includes grammar. The signs are divided into 50 categories, while the German SignDict places them in alphabetic order . If one is missing words, it is possible to ask for them or contribute with videos oneself. The man behind SignDict thinks that it is important that everybody can participate. He writes on SignDict’s website:

“The goal is to create the first interactive sign language dictionary in which everyone can participate without the need for technical knowledge.”

NZSL also allows one to participate by asking for new signs.