On November 16, the European Commission launched the European Data Portal, which will serve as a central gateway to data published by administrations in countries across Europe, from the EU and beyond. Currently over 240,000 datasets from 34 European countries can be accessed through thirteen different categories and a multi-language search function.

The European Data Portal was launched at the European Data Forum held in Luxembourg on November 16-17. The portal aims to work in two ways: Firstly, it provides centralised access to datasets stored in national open data repositories all over Europe. Secondly, governments may be inspired to publish specific datasets they see published by other countries but had not thought about themselves.

The portal currently includes over 240,000 datasets from 34 European countries. They can be accessed through thirteen different categories ranging from agriculture to transport, including science, justice, and health. A multi-language search function indexes the data as well as its metadata. This should make it easier for developers, companies, journalists and interested users to find data from around Europe on specific topics, and re-use data and meta-data from other countries.

According to an economic study conducted by the European Data Portal team, the size of the market for open data is expected to increase by 36.9 percent over the next four years to 75.7 billion euro in 2020. That way, re-use of open (government) data will further boost the economy. Its benefits are diverse and range from improved performance of public administrations and economic growth in the private sector to wider social welfare.

The European Data Portal has been made available as a beta release. According to project manager Wendy Carrara [1, 2], the development team is currently experimenting with automated assistance on licensing conditions, to help understand what licences have been attached to what data sets, in order to avoid potential conflicts when mashing data from different sources. 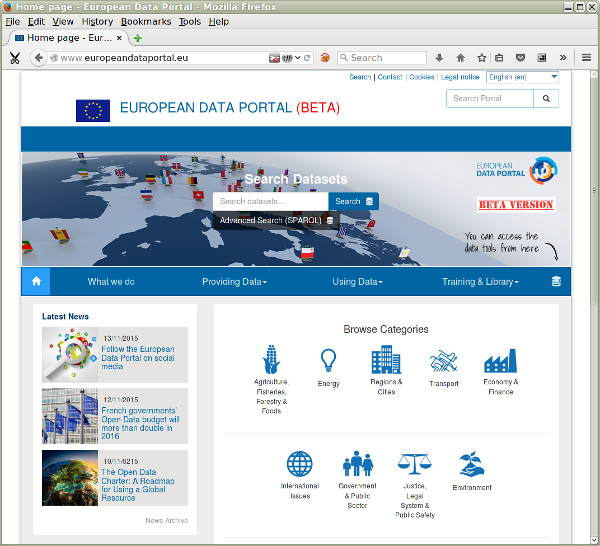