This month, the government of Hungary has sent the Steering Committee of the Open Government Partnership (OGP) a letter announcing its immediate withdrawal from the partnership. The move was a response to an invitation by the OGP Criteria and Standards Subcommittee to discuss concerns regarding the deterioration of civil space in Hungary at the OGP Global Summit that took place earlier this month in Paris.

The Government of Hungary had been under review by OGP since July 2015 for concerns raised by civil society organisations regarding their space to operate in the country, the OGP states in a media briefing on the events. On July 8, 2015, representatives of civil society organisations — including the Hungarian Civil Liberties Union, K-Monitor Watchdog for Public Funds, and Transparency International Hungary — submitted a Letter of Concern to OGP under its Response Policy about the deterioration of civil space in Hungary. After extensive research and consultation with the government, the OGP Steering Committee found that the complaints listed in the letter were valid.

According to several accounts [1, 2, 3, 4], the Hungarian move is the outcome of increasing tensions between the OGP and the country, and involvement of the Hungarian-American business magnate and Open Society Foundations (OSF) founder George Soros. The Hungarian government feels it is targeted, criticised, pressed and judged by the OGP in an unfair way.

In 2013, Russia was the first country to leave the OGP. And last March, Azerbaijan was suspended from the OGP, followed by followed by Turkey in September. 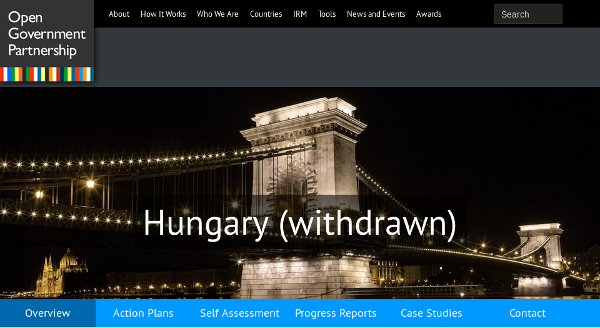