IT infrastructures at government administrations all over Europe are largely based on proprietary, closed software from Microsoft. With digital systems constantly growing in size as well as importance, countries are becoming increasingly dependent on this single American corporation. Investigate Europe, an international group of journalists, has investigated the current situation and the consequences of this vendor lock-in. The results, they say, are alarming.

For this research project, journalists from Investigate Europe interviewed economists, computer scientists, IT managers, security experts and politicians from twelve European countries, as well as the European Commission and the European Parliament. They conclude that the dependence on Microsoft:

In an article in the newspaper Tagesspiegel, one of the investigative journalists addresses several severe problems:

Some of the researchers interviewed are quoted as saying: The European states are in danger of losing control of their own infrastructures, and they need to invest heavily in migrating to an independent IT architecture. The use of Microsoft products in government organisations is no longer compatible with the constitutional state; we must change this, or we will degrade Europe into a digital colony.

For a solution, Europe should organise its own software industry based on open source, the researchers say. According to the investigation team, China with its "de-Windows-ing" and open-source strategy can show us the way. 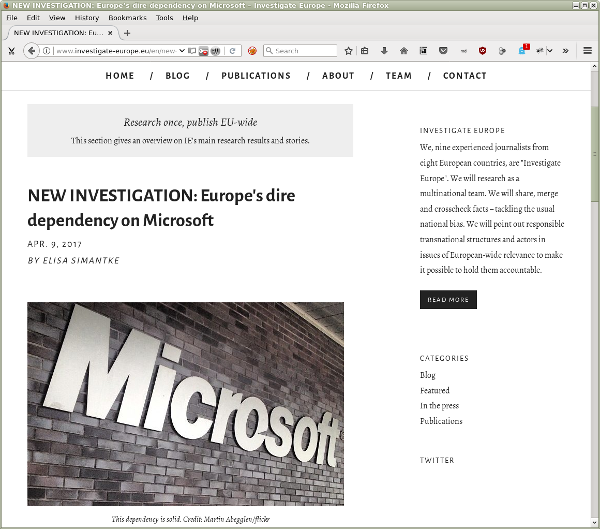