Open source where possible in…

The city of Gdańsk, Poland’s sixth largest city, is using open source software applications where possible. Open source is called an ‘important element’ in the city[s Operational Programmes, made public in August. This document describes the tasks and activities set out by the city to achieve the goals defined in the Gdańsk 2030 Plus Development Strategy.

From the English version of the document:

An important element of the actions specified in the Operational Programmes will be the implementation of innovative IT and telecommunication tools, including - where possible - open source solutions.

According to Tomasz Nadolny, Head of the Mayor’s Office, the Operational Programmes are a key part of the city’s open source actions. “When considering new IT applications, we first check if there are open source solutions available”, he said in an email to the European Commission’s Open Source Observatory. If there are no open source options, the city requires proprietary technology to use open standards, Nadolny said. “We always want to be able to switch solution provider.” 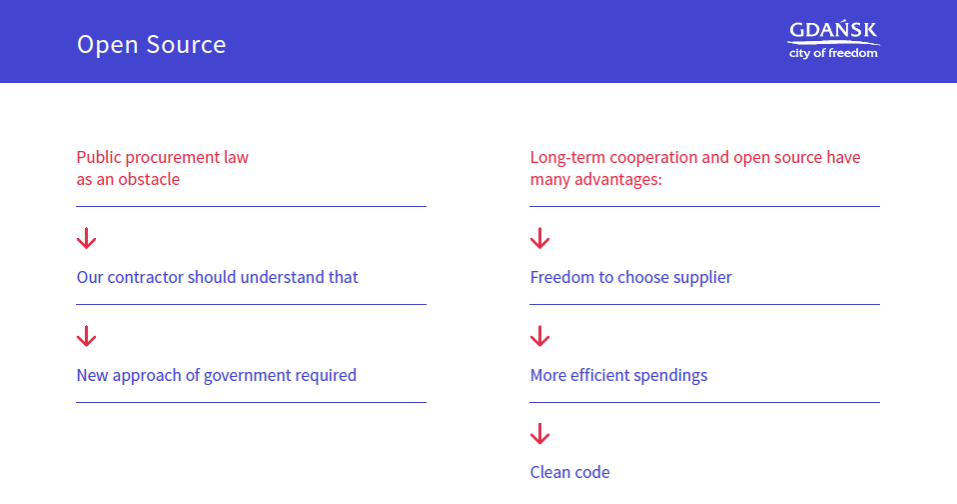 “Gdańsk, the City of Liberty wants to have the freedom to choose the provider that best serves its residents”, Nadolny notes in a recent presentation at an international conference.

Open source software is central to the Open Gdańsk project, he writes. In this project, the city makes its data available to its citizens, software developers, and businesses. Yet Gdańsk also makes available its own open data applications. The source code is available as open source on GitHub, Nadolny writes. Examples include "ThrowIt.Away", showing users how Gdańsk has organised waste recycling, and BandGdansk"which shows on a map the best locations in the city for planting trees. The applications were developed in cooperation with the Foundation eState (Fundacja ePaństwo) and the Code for Poland project.