Earlier this month, Open Government Week took place in Romania. This event was linked to the International Open Data Hackathon, which was organised on Saturday 5 March 2016.

Around 450 people took part in the ten sessions that took place during this six-day event, says Larisa Panait, member of the Romanian OGP Coordination Unit and Advisor to the Chancellery of the Prime-Minister. They were representatives of public institutions and local authorities, civil society members, students, open data activists, journalists, participants from the government internship program, academia, Members of Parliament, and representatives of the private sector.

The 35 panellists and partners in the event were members of the central and local public administration, representatives of international organisations (OGP Support Unit, OGP Independent Reporting Mechanism, and OGP Points of Contact from Greece, Bulgaria and Moldova), embassies (UK, USA and the Netherlands), NGOs, and the private sector.

As this year we are in the process of developing our third OGP National Action Plan, we decided to cover more aspects of open government, Panait continues. All these different sessions were about topics of interest for the development of the Action Plan. One of the objectives of the Open Government Week was to bring together the actors from public institutions, civil society, academia and the private sector who would be involved in the implementation of the Plan and discuss future possible commitments.

As part of the OGP process, we are working closely with civil society in both the creation of the National Action Plans and in their subsequent implementation and evaluation. As such, events dedicated to the OGP process — or open government in general — are organised in collaboration with civil society partners. The drafting of the third Action Plan, just as the 2014-2016 Plan, should be the result of a co-creation process. Part of the Open Government Week was dedicated to the proposals of civil society for the new Plan. 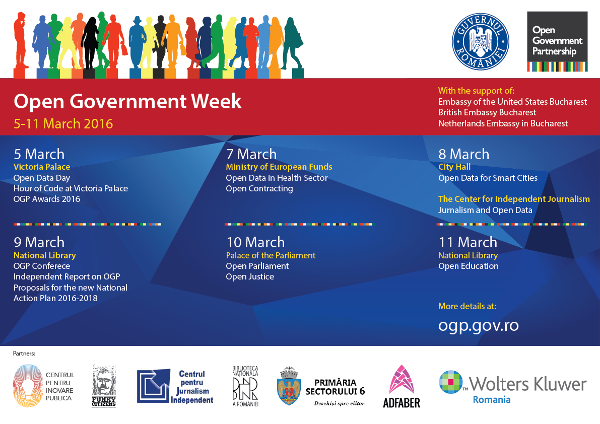 This year's event is the first in this format, Panait explains. We first started organising events around the Open Data Day in 2014. That year a two-day Open Data Hackathon was initiated by civil society organisations — the Romanian Foundation for an Open Society, the Romanian Association for Technology and Internet (ApTI), geoidea.org and others — in collaboration with the Chancellery of the Prime-Minister. Last year, we celebrated Open Data Day during three days, with an Open Data Conference and an Open Data Hackathon. The event was organised by the Government of Romania (the Chancellery of the Prime-Minister and the OGP Unit), CSOs (the Coalition for Open Data), and embassies.

The USA, the UK and the Dutch embassies are great supporters of the Open Government Partnership process in Romania. Their contributions in this event included participation of high ranking representatives in many of the panels, sharing good practices from their respective countries, and expressing their support for the process, involvement of private sector representatives, social media messages of support dedicated to the Open Data Day from the ambassadors, and collaboration in organising the events and bringing relevant stakeholders to the table.

We hope to organise a similar event next year, using the lessons learned so far, as such debates represent a great platform to bring together different stakeholders and foster new ideas.