SVT turns to open source for its digital tools

Swedish national public television broadcaster SVT has committed in 2018 to increase working with open source. Having released a number of own developments over the last years, SVT is now publishing its in-house transcoding software Encore for anyone to use.

The digitisation of broadcasters is not quite new, but the exposure to open source software has increased over recent years, as it has in many sectors. Not removed from movement of time, a first decision in 2018 to strive for more open source was still cautious. Josef Anderson, today Open Source Lead at SVT, asked readers in March 2018 to “slow down — we’ve just now taken the decisions and started working on this. The hope is that it will bring forward both small releases and bigger project, but let us not haste — we want to get this right, from the start.”

Now fast forward three years to May 2021 and it is clear SVT has not slowed down. Over the years the broadcaster has published tools such as their Election Compass and the backend software graphql-defragmentizer. Now, Olof Lindman, Video R&D Engineer at SVT spoke about the publication of SVT’s trancoder Encore.

Transcoding is the process of reprocessing a video/audio file into a different format or bitrate. All professional audio-visual streaming companies keep a number of versions of the same content to adjust it for different bandwidth and device scenarios for the viewers. SVT was looking for more automation, flexibility and efficiency in its encoder, the software that implements this process. While SVT was using a commercial proprietary solution, this software wasn’t fit for purpose anymore. So the in-house R&D team set out to create their own solution: Encore.

The development of Encore already started in 2018, as a proof of concept. Video transcoding is a complicated, mathematically intensive process. The SVT team therefore relies on many open source software components without which Encore simply would not exist, such as the core transcoding solution ffmpeg. Relying on open source not only provides the basis for the software, it also ensures it remains future-proof and flexible, as Olof says: "the beauty of this setup is that if we find an Open Source / royalty free piece of software that does any […] operation in a better way than whatever we are currently using, we can simply choose to implement the newly found piece instead. It is hard to accurately describe how powerful this flexibility really is, but in a sense almost every single tool that Encore makes use of can be changed or continuously improved without major development overhauls or excessive maintenance.” 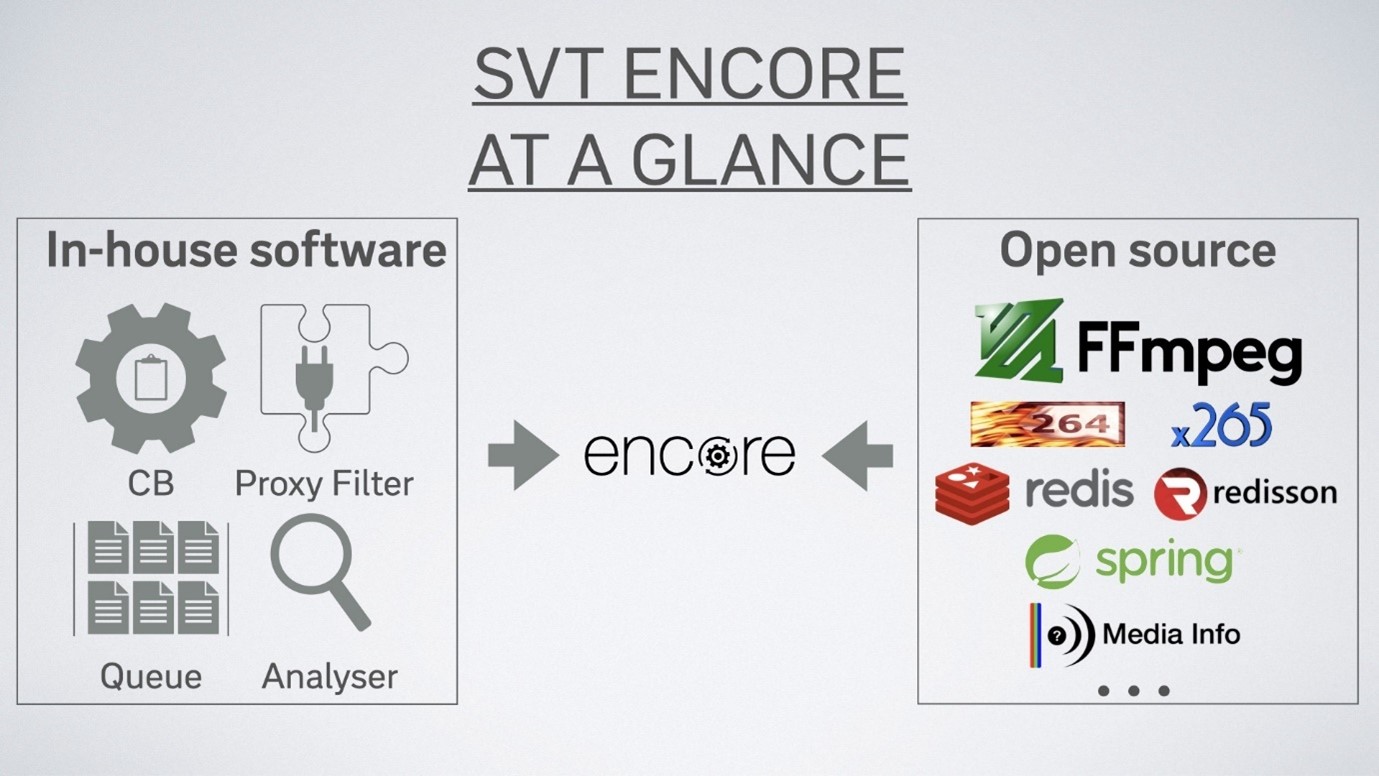 For SVT, the flexibility goes further, as the public company has its own, custom subtitle format. Using the ffmpeg component AVFrame the SVT team could simply write a filter that would translate the SVT format and thus make it compatible, “this would be very hard to achieve with a commercial transcoding solution for many reasons, the most obvious one being the fact that no other company would have any idea of how our custom subtitle format works.”

In testing, Encore showed itself to be dramatically more efficient, ”blow[ing] our current proprietary equipment out of the water, by a huge margin, when comparing visual quality”, Olof said in 2018. Consequently, today “almost all VoD content that is being released on SVT Play has been transcoded using Encore.”

Andersson added that “a public organisation working for the public’s best, has an obligation to strive for transparency in their work and efforts. It is an important democratic issue, and it is a trust issue. From the technical level, Open Source is a way to provide this”, acknowledging the specific responsibility publicly owned companies have.

Both expect more projects to be made available in the future as open source. For Encore, Lindeman hopes “that others will find [it] useful and beneficial to their transcoding needs, and that new collaborations will spring from the project itself.”