The City of Vienna and KDZ have released version 3.0 of their Open Government Implementation Model to the public in German as well as English. The Model describes five stages of a strategy as well as practical recommendations for politicians and administrations to implement open government.

According to the authors of the document, the Model has already been re-used by other public agencies, within Austria as well as abroad, as a foundation for their open government initiatives. Since its inception, the document has been downloaded more than 10,000 times.

The Open Government Implementation Model is based on the publication 'An Open Government Maturity Model for Social Media-Based Public Engagement' by the US researchers Gwanhoo Lee and Young Hoon Kwak. Its development was initiated by the Chief Executive Office of Vienna, which contracted KDZ — Centre for Public Administration Research to contribute to the city's strategy.

In order to bring the insights and propositions gained to the attention of a wider public, the internal strategy document was further developed and published as the Open Government Implementation Model. It has been made available for re-use under the Creative Commons Attribution 3.0 Austria License. 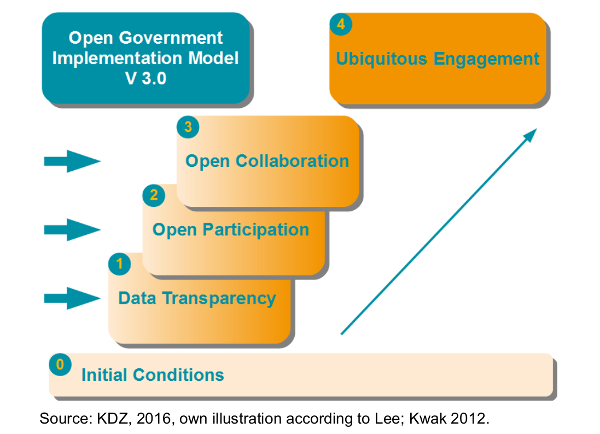 A german language version of the document is available here: https://www.kdz.eu/de/open-government-vorgehensmodell