Tutorial: on the use of Crane’s Genericode-to-UBL-NDR to extend the Core Vocabularies and create e-Document formats

This tutorial explains how to create an electronic Document in XSD format using the Genericode to UBL NDR tool of Cranesoftwrights. We have used the tool to create a sample document called ‘Business Activity Registration Request’ using the ISA Core Vocabularies and the UBL Naming and Design Rules.

The Genericode to UBL NDR is an open-source package provided by Crane Softwrights available under the Modified BSD Licence. This package allows creating UBL 2.1 XSD Schemas and OASIS CVA (context/value association) files according to the UBL Naming and Design Rules. In 2012, the script was already used to produce the original XSD Schemas of the ISA Core Vocabularies. The input for the package is a UBL NDR 2.1 spreadsheet expressed using the OASIS Genericode standard. In order to create this OASIS Genericode file, we have used an OpenOffice UBL NDR 2.1 spreadsheet template and the open-source OpenOffice spreadsheet export to Genericode subset export filter that serializes the contents of the spreadsheet as a set of Genericode rows.

In this tutorial, we use the Genericode to UBL NDR package to create a new XSD Schema for the Business Activity Registration e-Document using the ISA Core Vocabularies and UBL as the main libraries of reusable elements.

In order to create the schema, we have used the files listed in the table below.

The first step is to create the spreadsheet from which the e-Document format will be generated. The file has to be populated from the information requirement model created in previous stages of the methodology (see e-Document Engineering Methods - Template Activity_Registration).

In this step, we map information requirements to existing ISA Core Vocabulary elements or UBL aggregates when possible. If there are concepts neither in UBL library nor in the ISA Core Vocabularies, we can create them in the BusinessActivityRegistrationRequest common sheet. In our pilot, we will not need to create additional classes in the common sheet.

The Pilot e-Document file has to follow the UBL NDR metadata. The elements captured in UBL are based on the ebXML Core Component Technical Specification Version 2.01. Each sheet has the following columns:

Each Object Class is an ABIE. Object classes are also referred to as Re-usable Types. In UBL, a document type is also an ABIE, and this means that the Object Class for the Business Activity Registration Request e-Document will be the same for all properties of the e-Document.

The e-Document sheet has to be filled in following the requirements from the Information Requirement Model:

In the process of populating the spreadsheet, some concepts from the information requirement model can be grouped and mapped to the ISA Core Vocabularies: 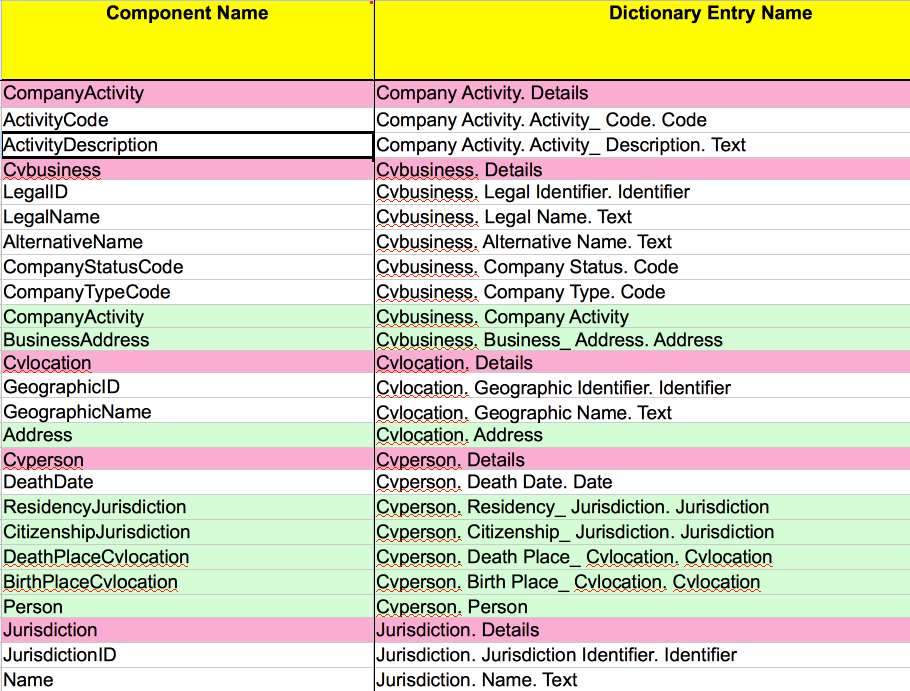 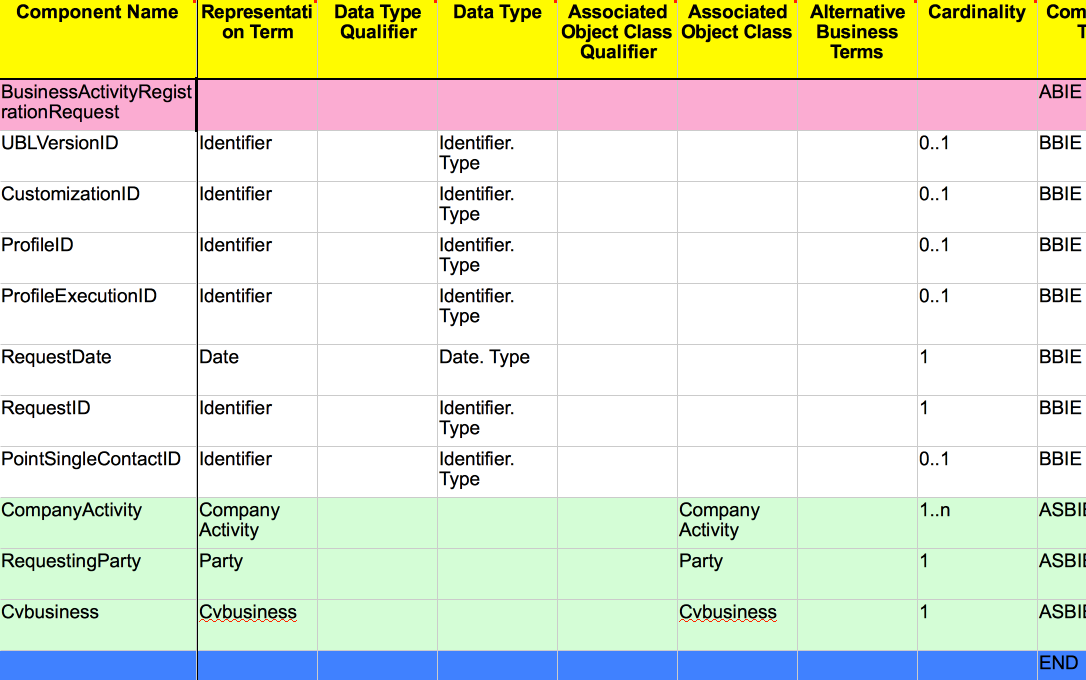 We have also reused the UBL Version and document metadata basic information entities such as the Customization Identifier and the Profile Identifier, commonly used in UBL Schemas.

The OpenOffice 3 file has to be exported to a Genericode file.

To install this export filter, refer to the Readme file provided with the package. Below there is a summary of the steps to install the filter:

2.1. Uninstall the installed version of these filters

It is recommended to first uninstall any old version of the filter before installing a new one. See the OpenOffice spreadsheet export to Genericode subset Readme to learn how to uninstall a filter.

Start OpenOffice 3 and open a new document or spreadsheet. Click the menu item "Tools / XML Filter Settings..." to get to the filter dialogue.

The filter is installed using the following procedure. Press the button "Open Package..." without regard for any existing filter that may happen to be selected:

Navigate to the directory in which you unzipped the distribution file and select Crane-gcExportSubset.jar to add the "UBL NDR to Genericode SimpleCodeList by Crane Softwrights Ltd" filter to your installation and report successful operation:

The filter is now successfully installed in your OpenOffice.

It is recommended to use the “.xml” extension for the exported file.

In our pilot, we have created the BusinessActivityRegistrationRequest-rows.xml file. 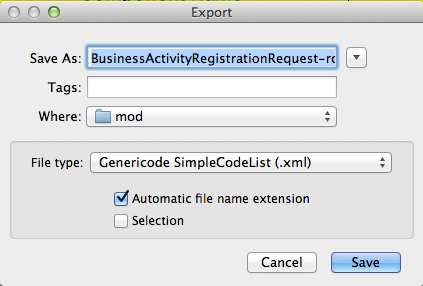 Now we have to properly setup the configuration file to run the XSD production script.

There is a configuration file and a launch file. We have created our own files to launch and run the production script.

The createbarr batch file has the following commands:

It uses the Java saxon9he.jar engine to build the XSD schema file using the BusinessActivityRegistrationRequest Genericode file and the config-barr.xml configuration file as inputs.

The Crane-ublndrChecker.xsl file is the XSLT file that checks that the UBL naming and design rules are properly applied into the Genericode file.

The config-ubl-2.1.xml and the UBL-Entities-2.1-PRD2-fix.gc files are used to locate the UBL common vocabulary.

The Crane-gc2ublndr.xsl file is the XSLT file that converts the Genericode file to a XSD Schema following the UBL naming and design rules.

The launching file starts checking the Genericode file provided as input and then creates the schema following the configuration and with the “barr” namespace prefix.

The configuration file is called config-barr.xml:

The configuration file has the following sections:

The last step consists on generating the XSD Schema itself.

The script has to be launched using the launch script.

When there are no errors in the checking phase, the script generates the following XSD Schemas:

The XSD Schemas follow the UBL naming and design rules.