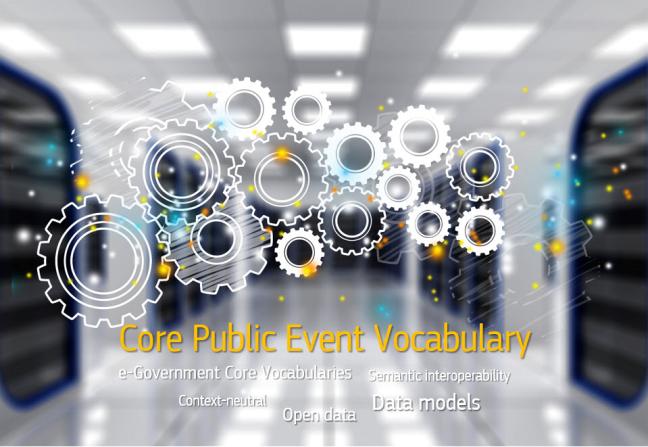 Open government data is a valuable resource of information that is publicly available to anyone for analysis and reuse. However, even though governmental data is open, it is often represented and published in an unstructured way without following any specific guidelines. The ISA² programme has developed solutions, i.e. e-Government Core Vocabularies, that help public administrations to bring structure in their data.

What are Core Vocabularies?

Core Vocabularies are ‘simplified, reusable, and extensible data models that capture the fundamental characteristics of an entity in a context-neutral manner.’ They are used – among others – to assist public administrations in exchanging information on a basis of a context-specific data model, as well as to integrate data that comes from disparate data sources.

One of them is the Core Public Event Vocabulary (CPEV) which aspires to become a common data model for describing public events (conferences, summits, festivals, exhibitions, etc.) in the European Union. CPEV, as it the case of all Core Vocabularies benefits from the fact that it is context-neutral, which means that it can be used in different domains which are dealing with event modelling (such as tourism, culture, scientific or business meetings etc.).

The CPEV has been developed as part of the e-Government Core Vocabularies solution under the ISA² programme. It provides public administrations with a data model for event information allowing them to describe event-related data in a way that can be exchangeable ‘in a structured, commonly used and machine-readable format’. The initiative started in January 2018 and the development of the CPEV followed an open and collaborative process involving data model experts from various European public administrations. The first draft version of the Core Public Event Vocabulary was released in 7 May 2018. The CPEV is further developed with the aim to promote it as a well-established standard.

In our webinar on the Core Public Event Vocabulary (CPEV) which has taken place on 24th September, Italian and Japanese public administrations illustrated how they are modelling public events and how the CPEV can bring value to their undertaking.

In the case of Italy, the Core Public Event Vocabulary has been incorporated into Ontopia which provides a general platform for controlled vocabularies aiming at facilitating data exchange as well enabling (open) standardisations. Japan’s example is a living proof of the diversity of cases in which the Core Public Event Vocabulary is used and benefits citizens in their every-day life.

If you are interested in learning more about Japan’s and Italy’s experience with modelling public event information, have a look at the relevant presentations on the webinar event page.

Do you want to contribute to the further development of the CPEV? Contact us via contact@semic.eu.