Governments should make the source code of their software solutions available as open source, says Gartner, a consultancy, in a report for the Dutch government published this week. Open sourcing of government software lowers cost and boosts the economy, the report says. 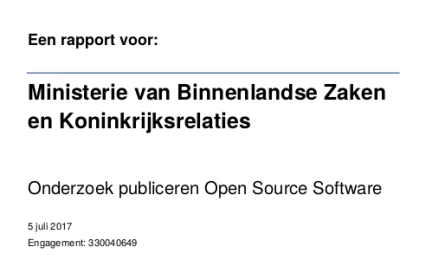 Gartner recommends the Dutch government to follow in the footsteps of other European Member States and make publication of its source code a matter of policy.

In the Netherlands, however, this would necessitate updating the government’s rules of conduct that minimise interference with the private sector. According to government lawyers, these rules currently require the costs of development and publication to be passed on to those reusing the software. Others experts say these rules should not apply because the government does not actually compete with companies by providing source code for everyone.

Gartner advises updating the rules of conduct. The resulting clarification would allow the government to fulfil a recent request from the Dutch parliament. Last December, parliament asked the government to come up with a vision document on the publication of government source code.

Until the rules are clarified, the Dutch government should allow limited sharing of source code to other public services, the study says. This would give public services experience in how best to publish source code, and to steadily increase the involvement of others. “This will show the benefits of sharing code as open source, motivating others to take part,” Gartner writes.