The European cloud platform is a reaction to a market dominated by tech-giants. It is an initiative for establishing digital sovereignty through open technologies and EU data strategies. The next step is to create decentralised Hubs for innovation and implementation. 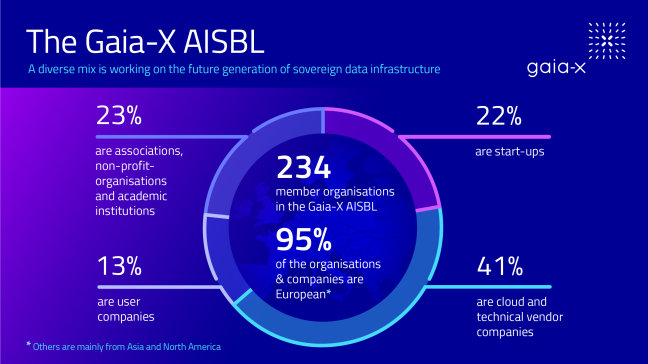 The initiative for Gaia-X was taken in October 2019 by the German and French Ministries of Finance. Gaia-X is a Pan-European cloud platform. The German ministry has already invested 13,5 million Euros in the project, which was officially founded in January 2021, and the first specifications were ready in June 2021.

Europe’s digital infrastructure currently lies in the hands of a small number of major non-European corporations: Europe has no notable operating system developers, no relevant search engines, no global social network and no competitive cloud infrastructure.

- Motivation for EU’s engagement with Gaia-X

Reaction to the Silicon Valley

The cloud computing platform is a reaction to the dominance of Amazon Web Services, Microsoft Azure, and Google Cloud, as well as a wish for data sovereignty and security. Gaia-X is meant to bring Europe together in a new digital economy, locally, regionally, and internationally, with shared standards and open technologies. It is a network to serve citizens through collaboration between companies, policy makers, public sector, and other organisations, in short, everyone participating in the digital economy. By using open technologies, Gaia-X provides the possibility of standardising data transmission without vendor lock-in.

The architecture behind Gaia-X consists of three layers: Data, infrastructure, and federal services. The data layer provides the possibility of creating intelligent services (IoT, Big Data applications, etc.), infrastructure will allow private actors to collaborate by providing and developing services, and the federal layer supports the two other layers and is based on open source licenses. The federal services consist of minimum technical requirements and services.

Everything must follow the principles of Security-by-Design and Privacy-by-Design and it must be user-friendly as well. Companies which cannot provide this and the shared standards will not be welcomed into the project.

The first set of Federation Services will be provided as open-source software and will be made available for Code artefact according to Apache Software License v2 (ASL2) and Non code artefacts according to Creative Commons License with Attribution “CC-BY”.

The Gaia-X project and the alliance behind it will create an ecosystem where data are collected and shared with trust. The users must keep the sovereignty of their own data. The Data Strategy by the EU underlines the importance of data as a source of innovation as it could be the foundation of personalised medicine, improved mobility, and a better foundation for political decisions.

Last year, Gaia-X was criticised by Stefane Fermigier (CEO of Abilian and co-president of CNLL, the French association of open source software companies) and Sven Franck (head of marketing at Nexedi, one of the largest open source software publishers in Europe, and manager of Free Web Endowment Fund as long with member of the board of Volt France) to be a Trojan horse for the tech-giants into Europe. The criticism does not seem to affect the support for Gaia-X by the 100 companies and academic institutions currently involved in the project.

The next step is partly to increase the work in the nationals hubs, which provide innovation and implementation, and partly to ensure the tender for implementation partners.