Italian military to save 26-2…

The Italian Ministry of Defence expects to save 26-29 million Euro over the coming years by using LibreOffice. The LibreDifesa project aims to eventually migrate all of the organisation's well over 100,000 desktops to the open-source office productivity suite. Taking into account the deadlines set by our current Microsoft Office licences, we will have 75,000 (70%) LibreOffice users by 2017, and an additional 25,000 by 2020, says General Camillo Sileo, Deputy Chief of Department VI, Systems Department C4I, for the Transformation of Defence and General Staff. That will make this deployment of LibreOffice the largest in Europe.

According to Sileo, the LibreDifesa project has made a good start. His project group consists of representatives from various departments at the Italian army, navy and air force.

We started with an impact assessment, a series of briefings to the staff, and the training of trainers, installers and IT representatives. We are now working on a LibreOffice e-learning course for our users, which will be made available under a copyleft licence. For that part of the project, we are cooperating closely with LibreItalia.

Thus far, we have migrated 5,000 workstations and have not yet encountered any serious problems. If managed properly, migrating to LibreOffice is less difficult than you may think. People are enthusiastic, involved and helpful. By sharing as much as we can, being transparent, and working closely with the LibreOffice community, we hope to send a strong message to our citizens and become a valuable example to other public agencies.

The Italian Ministry of Defense is closely following the LibreOffice Migration Protocol published by The Document Foundation (TDF). The same approach was taken by the LibreUmbria project, which successfully migrated thousands of desktops at various government organisations in the Italian region of Umbria. Last September, the Ministry of Defence signed a memorandum of understanding with LibreItalia, a non-profit organisation promoting technology and equal opportunity based on open source software and open data to public as well as private parties.

Sileo gives several reasons for the migration to LibreOffice: 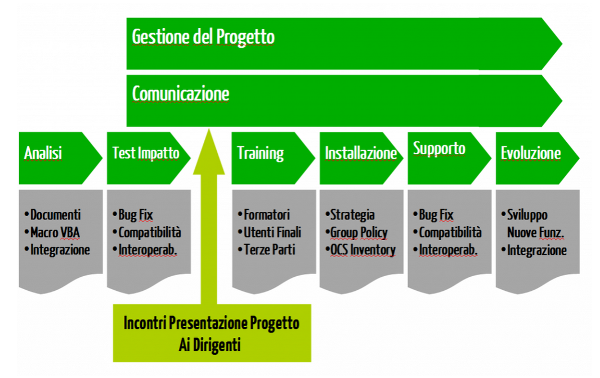