The latest report on the state of Open Source Software in higher education and research was published at the end of January. The report is a part of the support that DINUM, the French interministerial agency, has given to the mission Bothorel that recently put forward several recommendations on Open Data and Open Source.

The research conducted by the consultancy Inno³ focuses on Open Source in higher education and research and bases on a survey of over twenty institutions and other studies on the subject. It aims to draw a first overview of Open Source practices in higher education and research institutions and analyse related challenges and opportunities. The report also took a look at internal Open Source policies in analysed organisations in relation to other perspectives on digital development, such as digital sovereignty, open data, open access.

The Committee for Open Science (CoSO) and its working group on Free and Open Source Software contributed to the report, providing its expert insights and advice. CoSO was created in 2018 following the national plan for Open Science presented by the French Higher Education Minister and its main aim is to promote open access and increase open collaboration between diverse research institutes and establishments.

As shown by the study, a majority of analysed higher education and research institutions have several practices regarding organising, contributing to and sharing their Open Source resources, however, it is rarely done in an institutionalised manner with clear guidelines and internal policies. Usually it takes a form of unique initiatives and projects under the aegis of a given institution, making collaboration outside of it quite complicated. This could be helped by a more harmonized approach and framework for these institutions and providing guidelines, best practices and lessons learned for creating such guidelines.

The survey conducted for this study was answered by over 200 respondents coming from diverse higher education and research organisations. It sheds some light on Open Source processes and practicies in higher education and research. For example, Github is the most popular platform among the respondents, used by almost 70% of respondents, even though there is a dedicated research-focused, French-based platform SourceSup. According to the respondents the French platform is more complicated in use, not appealing to “non-developer” public and it makes sharing code with researchers outside of France more difficult, even though it is much more trustworthy and supports the notion of digital sovereignty. Interviewers do not regard creating a national repositories as a viable alternative to global players that raise concerns - “”we need a single source of truth for the code.”.

The issue of barriers to the publication of source code was addressed in the questionnaire - the lack of time (30%) was a major reason mentioned, followed by the current methods of research evaluation and the lack of institutional support. As shown by previous surveys on Open Source, many employees do not know the internal policy on Open Source contributions. 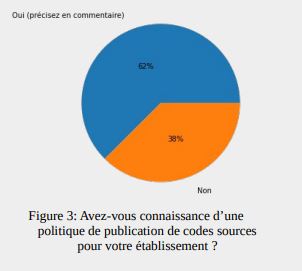 Almost 40% of respondents do not know the internal policy of their institution on Open Source.

Roberto Di Cosmo, the director of Software Heritage and a part of the CoSO working group on OSS states in the report: "We need to find a process that combines time savings with immediate benefits for researchers - so that the evaluation of open source is not perceived as generating an additional bureaucratic step". This is reflected in the recommendations proposed by the report, proposing several practical steps to be applied for Open Source in research. Some of the other recommendations include:

The report proposes a vision of a more collaborative ecosystem, where different research institutes and other public sector players work together both nationally and on a global scale. The institutionalisation of Open Source activities, unification of processes and clarity on contribution policies would help achieve this goal.

The study was shared as a part of the Bothorel mission and contributed to the report to the Prime Minister published in December. It will be presented on 9 March during a dedicated webinar (in French). You can access the full report in French here.