For citizens to travel or move across Europe and for businesses to expand within the single market, they need to interact with several public administrations of Member States. To enable this, information needs to flow seamless across borders and sectors. The Interoperability Solutions for European Public Administrations (ISA) Programme of the European Commission addresses this need by promoting the re-use of data exchange models, taxonomies, data definitions and reference data, such as country codes. We call these semantic assets. In short, the re-use of semantic assets is vital for information to flow freely between Public Administrations and, unlike before, these semantic assets can now be found through a single search on Joinup.

This new service aggregates descriptions of semantic assets received from 15 partner organisations. This aggregation is made possible by the use of a common metadata vocabulary, known as the Asset Description Metadata Schema (ADMS).This is a standardised metadata vocabulary schema that helps public administrations, standardisation bodies and other stakeholders to document their semantic assets in a uniformed and structured manner (their name, their status, version, where they can be found on the Web, etc). In other words, ADMS defines a common way to describe semantic assets.

ADMS was developed following a process and methodology for creating vocabularies based on best practices of the World Wide Web Consortium (W3C). ADMS is the result of one year of consensus building within a multidisciplinary working group of more than 60 people from 20 EU Member States, several EU institutions, the US and Australia. Furthermore, a public review of the resulting vocabulary was conducted in January 2012. The ADMS specification was published by the W3C’s Government Linked Data (GLD) Working Group as the First Public Working Draft for further consultation within the context of the W3C standardization process, potentially leading to the publication of these vocabularies as open Web standards available under W3C's Royalty-Free License.

More than 1300 semantic assets from 15 participating organizations are already available. In more detail: 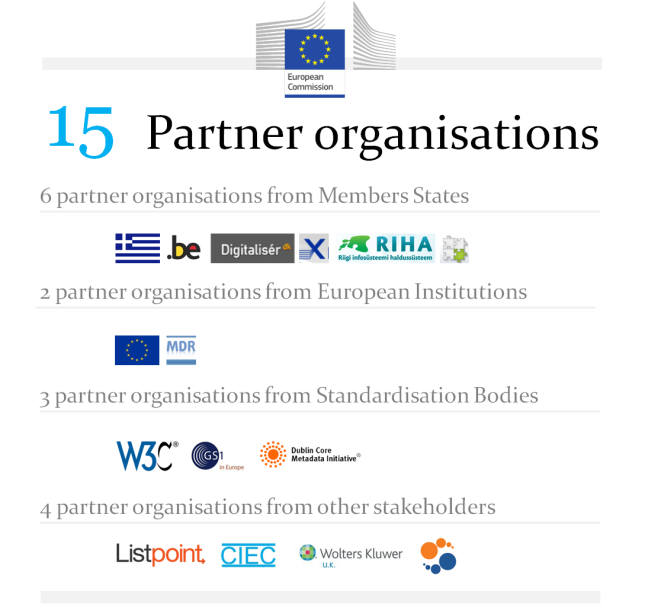 4 partner organisations from the IT sector:

What are semantic assets?

Who benefits from the ADMS-based federation of semantic assets repositories?

The service addresses both users and publishers of semantic assets.

Why a single point of access for semantic assets is important?

When two parties exchange information, they need to agree on technical, semantic, and organisational conventions. Such conventions are documented in interoperability standards and specifications. However, in spite of their importance, standards are not easily discoverable on the web because information about them is seldom available. Navigating on the websites of the different publishers of standards is not efficient either. Hence, still today, it is not easy for public administrations to discover what standards are available to them for re-use. Highly reusable data models, valuable code lists and other similar specifications are not easy to find on the web. As these assets are not easy to discover, public administrations spend resources recreating them over and over again. It is not only the money that is spent on reinventing the wheel but also the money needed to fund endless mapping and convergence projects between similar specifications. ADMS and the federation help solve this problem.

How to join the ADMS-enabled federation?

There are several alternatives that currently exist to join the federation. The 15 partner organisations have used one of these alternatives to federate their semantic assets on Joinup:

Whatever the solution chosen to join the federation, the ISA programme has set up a dedicated team to support you joining the federation and publishing your semantic assets on Joinup. Please visit the Community of European Semantic Asset Repositories (CESAR) on Joinup.

Is this ready to launch?

Of the “specifications” listed by the new service, I note that there are

- 896 from W3C (many of which are redundant, outdated or superseded by later versions)

and zero from each of

It is promoted as a service to find specifications “that have been used to develop information systems”. Many of the entries listed clearly do not help develop information systems, and many more that clearly do are not listed at all. It is flagged as a “new service”, not as a prototype or a pre-production site, so many may be misled into believing the completeness of the results they find.

What should I read into this? How was the content populated? Manually? By the contractors? By the organisations listed? Or was it populated automatically?

If the repository has been engineered in a way that explicitly favours discovering and displaying results from one organisation, in what way is this different from, say, Google being accused of manipulating search result ranking, in favour of its own properties?

This is seriously worrying if ever this resource be used or cited by anyone trying to find a legitimate and complete response to specific questions about what specifications exist to address particular issues.

I would like some assurance that this announcement is incorrect and that what has been launched is only a prototype - which is something that I could understand and even wlecome as a first, pre-production site

Hello Peter,   I am pleased to hear from you. Thank you for taking some time to provide us with feedback on our announcement.  The federation is fundamentally different from Google because every participant must describe its ICT specifications in ADMS – there is no automated online harvesting for the moment. Once a participating organisation creates its ADMS file, in RDF or XML, we upload it on Joinup. The contributor chooses what to include in the file, we provide them with guidelines on how to make the selection. This means that the content comes from organisations that have voluntarily decided to use ADMS and make their ICT specifications searchable on Joinup. So far we have more than 1.300 assets from 17 organisations. We have received ADMS files from Member States, Standardisation Organisations and Private Organisations. You can have a more detailed look at Joinup:  https://joinup.ec.europa.eu/catalogue/repository/all&nbsp;   The federation is a new service and, as such, improvements, at all levels, will come from more contributions from organisations like OASIS and its use by the online community. We keep collaborating with participating organisations so that they can enhance their ADMS descriptions according to the feedback received. For example, we will forward your remarks to W3C for them to become aware of your concerns. Please feel free to give us more detailed information about descriptions of standards that you consider to be outdated.    I would also like to add that several organisations mentioned by you are expected to join the federation in the next months.  We hope that your email precedes a decision by OASIS to join the federation. As you may know, we have tried to have OASIS onboard as from the start but, unfortunately,  in March 2012 Robin Cover told us that this was not possible as OASIS lacked a database of canonical metadata and  was not sure on how to handle the URIs for licenses (IPR). We are also pleased to inform that we (the contractor of ISA action 1.1) can provide limited support, please have a look at this page on Joinup for more information:  https://joinup.ec.europa.eu/community/cesar/description&nbsp;   To conclude, we look forward to help OASIS adopt ADMS and join the federation with the least possible delay.
Makx DEKKERS
Mon, 04/02/2013 - 22:29

I do not entirely understand your criticism that the federation of semantic asset repositories on Joinup cannot be an operational service because its lack of "completeness". As far as I can see, the service does not promise in any way that its content collection is complete. It does indeed rely on voluntary contributions by the 15 content providers listed above which is a subset of organisations that have useful resources. We would welcome more content providers coming on board, because that would mean that the service becomes more useful.

The approach to rely on voluntary contributions is the same as the approach of Europeana.eu, the portal that lets you explore Europe's cultural collections. They have metadata for a very large collection of cultural material, but even they aren't "complete" -- they just have what their providers contribute. If you were really interested to see resources held by the British Museum or the Uffizi in Florence, two important cultural institutions that are not in the list at http://www.europeana.eu/portal/europeana-providers.html, you might then also argue that Europeana can't be an operational service because it does not include some material that is important to you.

In my mind, both Europeana and (on a smaller scale) the federation on Joinup intend to provide a service that is useful and that can grow over time. Both are quite explicit about what is in the collection, so every user will be able to look at the list of providers and decide whether they are going to find useful stuff. If their favourite content provider isn't listed, they will go somewhere else, or try to convince that content provider to join the federation.

My personal opinion is that completeness is a good long-term target but I'll settle for usefulness in the meantime.

A little error in Mister Makx Dekkers link ( he added some extra caracters that made the link inoperant.