The eGON approach to modernise and connect Czech services and people. (eGON)

eGON is the Czech overarching framework which structure and integrate all the eGovernment initiatives and the enforcement of electronic communication in the country.

The projects gives a concrete response to much of the principles of the new European Interoperability Framework (EIF). A particular interest is raised for what concerns the organisational interoperability and the governance aspects:  the roles & responsibilities for each eGON initiatives and projects are clearly assigned to administrative levels and sectors.

The first Czech national e-government strategies were approved by the government back in 1999. A renewed framework has been adopted in 2007, when the basis of the eGON approach have been set up. The adoption of the new eGovernment Act in 2010 is the legal framework under which the eGON project is developed.

The “Strategic Framework for the Development of Public Administration in the Czech Republic for 2014 -2020” has been approved in 2014. Implementation plans translate the strategy into concrete initiatives, including the e-government approaches that are now included in the whole eGON system.

The eGON “approach” intends to facilitate the administrative procedures of all the citizens of Czech Republic. As a side impact, civil servants of the national public authorities need to be properly educated and trained on new technologies. This is a must in order to satisfy the different kind of administrative requests submitted by citizens. But the main target keeps on being the whole citizenship.

Being the competent institution for eGov topic, the Ministry of Interior defines the entire eGON framework, is in charge of managing corresponding projects (see list below) and is responsible for their correct implementation. More precisely, a specific Office of eGovernment Chief Architect supervises and monitors the different parts of the eGON structure.

The whole eGON is composed of multiple projects deployed according to a clear director plan.

A metaphor helping to understand the eGON ecosystem depicts it as a human body composed by its different milestones: 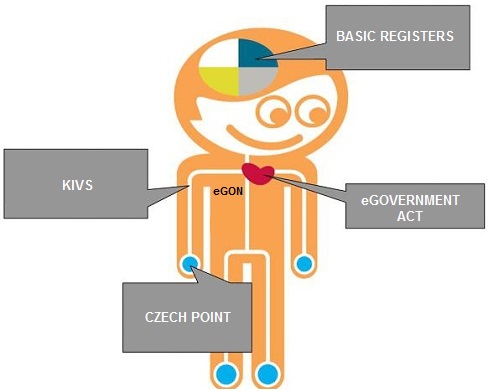 Depending on the addressed eGON project, one or another technological solution is adopted. Thorough work has been performed, for example, concerning the privacy and reuse of data. This is of first importance since the open source application is the favourite solution, according to openness and reusability principles that are listed as references in the Czech national framework and Interoperability factsheet. One of the main examples addresses the Base registry system. This is centralized point where to insert, store and optionally convert all the relevant data of the citizens, guaranteeing the privacy according to the relevant laws on data protection. The input is based on the need of secure data interchange between thousands of information systems of public administration. Base registries contain reference data about inhabitants, companies, building. Other information systems being part of the Czech public administration ecosystem access and reuse these reference data, when carrying out their own processes. 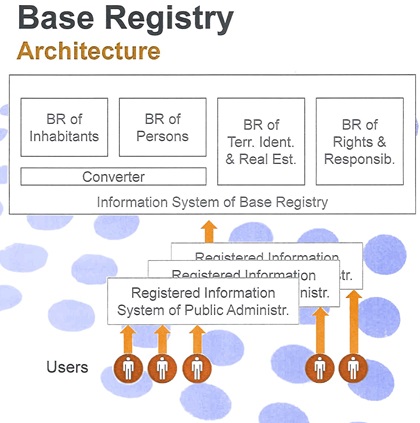 The benefits of the entire eGON approach are both local and global.

Looking to the local point of view, several eGON initiatives are adopted by the municipalities and relevant nearest authorities. As listed hereunder, some of these concrete examples create direct benefits such as:

Document management systems to archive all the relevant information once and in the proper and harmonized way for the efficiency of the civil servants and for a better service to the citizenship.

Czech Government also ensures that, taking for granted the many positive reactions he received related to the eGON project, its principles and implementation approach is helpful to accompany similar initiative run by other countries or even at European level.

As a specific and concrete example, it gave an input to implement a part of the STORK project, aiming to establish a European eID Interoperability Platform that allow citizens to establish new e-relations across borders, just by presenting their national eID. Service providers also become connected to the platform thereby increasing the number of cross-border services available to European users. The adoption of eIDAS in EU regulation (that follows several rules already enforced by eGON), is another example that is aligned with the concepts of the eGON approach.