Dear users, a new Joinup release will be deployed on Thursday 09/02/2023 between 13:00 and 13:30 CET. Within this time window, the site might experience outages. Please adjust your use of the platform accordingly during this time frame.

The Agency for Digital Italy (AgID) launched an initiative named #Data4all. This initiative aims to facilitate the access to specific Italian Public administration’s open data available in the following separated thematic portals: SoldiPubblici, ItaliaSicura and OpenExpo. These portals have been developed and launched by Public Institutions with the support of AgID in order to make available to anyone and monitor and analyse both financial information, including budgets, spending and public contracts, and data on construction sites and disaster events (e.g., floods, landslides, etc.).

In the context of these thematic portals, the main functions carried out by AgID are:

The mission of the Italian Digital Agency (AgID) is to manage the implementation of the Italian Digital Agenda's objectives, in coherence with the EU Digital Agenda. It also contributes to the diffusion of new information and communication technologies, with the aim of fostering innovation and economic growth. Under the Law Decree n.179 (article 9), the AgID is responsible for releasing, annually, technical guidelines on Open Data. These guidelines should specify the technical standards and ontologies for data and services. In cooperation with other competent authorities, AgID plays an important role as the reference body of national competence, both in the EU and at international level. AgID participates actively in the implementation of the programmes promoted by the European Commission reference framework and for promoting partnerships and cooperative arrangements at both European and international levels.

The Strategy for Digital Growth was presented by AgID and approved by the Council of Ministers on 3 March 2015. The tool approved by the Council of Ministers provides an opportunity to pursue the major objectives for growth, employment, quality of life and democratic regeneration across the country. The Plan for Digital Growth defines Open Data as the “enabling platform” for the development of innovation and administrative transparency. This action is based on the second national OGP Action Plan which includes the enhancement of the National Open DataPortal, dati.gov.it. This portal has been hosting the catalogue of Open Data published by Ministries, Regions and Local Authorities of Italy since 2011. In order to achieve these goals, AgID developed, within the portal, a new classification of datasets and radically revised the internal architecture of the portal.

In August 2015, Parliament adopted the Delegated Law on the Reform of Public Administration (Law no. 124 of 7 August 2015, Delegations to Government in the field of public administration reorganisation). This is the most important plan to modernize Italian public administration ever developed in the last 15 years and is at the very core of Government actions. It touches multiple aspects and concepts of public administration: digital citizenship, reorganizing the presence of the State at local level, senior civil service, anticorruption, civil service, chambers of commerce, research bodies, state‐owned companies, local public services, police forces, conference of services, silence‐is‐consent principle between administrations, single texts. A new reform for Public Administration was developed to the benefit of 60 million citizens and to support economic recovery. It includes 14 delegations and about 20 implementing decrees. In order to make legislation more flexible and aligned with the ongoing changes of the digital ecosystem, the Government of Italy decided to simplify, rationalize and deregulate the current legislation thus allowing citizens, businesses and administrations to fully benefit from the advantages of ICTs.

#Data4all is an initiative that provides a single access point for information about three principal open data projects carried on by the Presidency of the Council of Ministers. It has been a principal focus of the national open data portal dati.gov.it used to filter the metadata regarding SoldiPubblici, ItaliaSicura and OpenExpo. In essence, it is a narrative frame for external communication to citizens, practitioners and administrations. 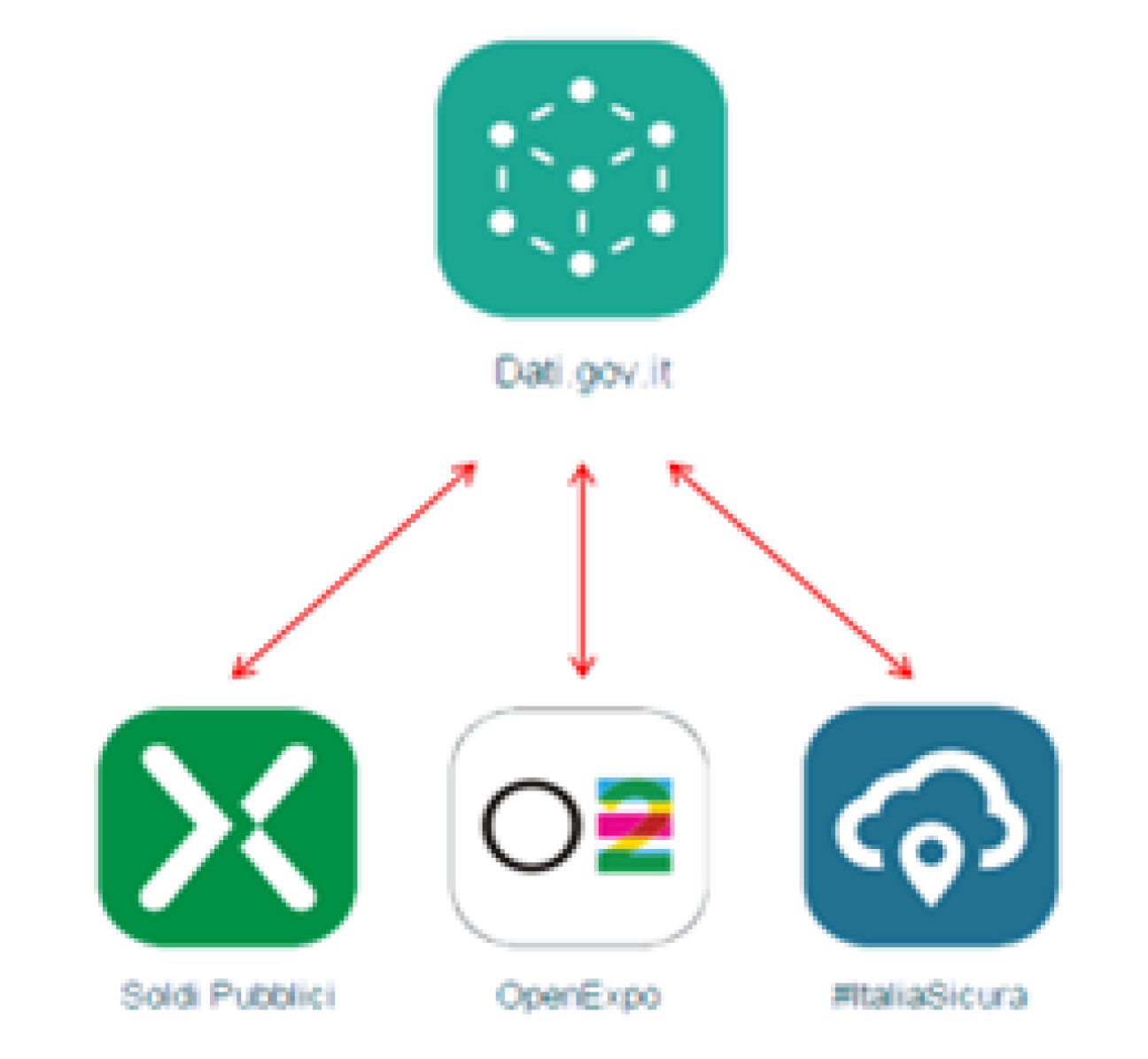 Dati.gov.it is the National Open Data Portal that allows everyone to see and understand open data from public administrations. AgID is currently working so that to transform dati.gov.it in the national data portal, including not only metadata describing open data of public administrations but also metadata describing databases owned and managed by public bodies (similarly to the experience of the European Data portal).

SoldiPubblici allows Italian citizens to access and compare public spending data from all local administrations. The aim of this portal is to increase participation of Italian citizens in public management with a view to improve access to data on public spending and enhance data transparency. Also, portal offers obvious benefits to Italian public administrations since they obtain results in terms of rationalisation of spending and can compare their expenses with other administrations. The information on the SoldiPubblici website is regularly updated. For example, SoldiPubblici has recently added a new visualization tool under the form of a clickable geographic map. The tool helps to communicate information by covering geographic area and represents the data in an interactive and visual way. Also, three new areas of spending data have been added (universities, ministers, and national agencies). Recently, Soldipubblici.gov.it became part of the new FOIA (Freedom of Information Act) Italian Law.

ItaliaSicura is a portal to monitor Government actions to counter hydrogeological risks. It provides an overview of the areas under a status of national emergency. The portal ensures that users can access to emergency related Open Data (i.e. landslides and floods) and the related works carried out by the Government.

OpenExpo contains data on management, design, organisation and deployment of Expo 2015. The portal was designed to support the accuracy and transparency of procedures connected with the organisation of the event. The model used ‐ beyond catching the attention of users on Open Data ‐ turned out to be really interesting due to its potential reusability for other major events.

[G1]In the figure I would suggest to visualize data4all simply as a box within dati.gov.it

The metadata published on the portal dati.gov.it are currently provided as a JSON-LD open format compliant with DCAT-AP, for the automatic harvesting with the European Data Portal. The new backend of dati.gov.it has been designed to be fully compliant with DCAT-AP_IT, i.e., the Italian profile for data portals born last April as an extension of the last version of DCAT-AP defined at the European level. The DCAT-AP for data portals in Europe (DCAT-AP) is a specification based on the Data Catalogue vocabulary (DCAT) for describing public sector datasets in Europe. Its basic use case is to enable a cross-data portal search for data sets and make public sector data better searchable across borders and sectors.

The portal also supports the CKAN API that can be used through HTTP requests and provides the results formatted in JSON. CKAN’s Action API is a powerful, RPC-style API that exposes all of CKAN’s core features to API clients.

The main contributions of the #Data4all initiative are threefold.

The lessons leant from #Data4all and, in general, from dati.gov.it encourage the systematic involvement of Italian civil society. The gained experience would also benefit to other projects with low cost and provide transferability in open source code with a simple design approach. In general, the Italian National Open Data strategy gained more sustainability and transparency, with the identification of key datasets and the achievement of results of the earlier strategies and expected outcomes. There are also some challenges for open data concerning minimum participation of civil society, data transparency and data protection.