MAREVA2: France goes ahead with the economic evaluation of its public IT projects.

MAREVA 2, the second version of the Method of Analysis and Rise of Value (Méthode d’analyse et de Remontée de la Valeur), serves to analyse the value of IT (information technology) projects. It follows the MAREVA 1 approach, designed back in 2007, less the risk analysis approach but with several extra utilities. It facilitates the forecast of projects’ results in terms of economic profitability, strategy and created value. It provides decision makers with an important tool to authorise a project kick-off and allow accurate follow-up and decisions management in every step of it.

The inter-ministerial Direction of Information and Communication Systems of the State (DINSIC) is a department under the authority of the Prime Minister, within the French public administration. It is in charge of coordinating the actions of administrations in information systems.

Considered to be the French Information Systems Directorate, DINSIC was founded on 21th of September 2015 by the merging of the former Inter-ministerial Information and Communication Systems (DISIC) and Etalab (in charge of open data policies).

Among other of its assignments, DINSIC is in charge of renovating the first MAREVA procedures that were designed and firstly applied back in 2007. Its aim was to determine the opportunity to select and carry out a project. It is a piloting tool based on 4 categories of criteria:

Always with a view to improving the management performance of IT projects, the method is modified in 2014 to give birth to MAREVA 2, now used by DINSIC, the ministries and public entities.

MAREVA2 is the inter-ministerial method of analysing the value of state information system projects, which provides assistance in strategic decision-making for the launching of IT projects and then in the steering of their value over time.

In recent years, the performance of the public IT projects is assessed using MAREVA. This assessment, which is made public for the most costly and important IT initiatives leads to the preparation and validation of budgets by the Parliament.

Furthermore, Article 3 of Decree No 2014-879 of 1st of August 2014 on the State's information and communication system provides that "Projects meeting characteristics, in particular projected costs, fixed by decree of the Prime Minister and the Minister in charge of the budget, are submitted for assent to the inter-ministerial director of information and communication systems of the State." This compliance now requires that projects benefit from a value-driven analysis, applying this MAREVA 2 method.

MAREVA 2 targets any administration wishing to better manage its IT projects, including transformation initiatives such as public sector modernisation or digitalisation. MAREVA 2 is first an analysis method and then a decision-making and communication tool for key actors of governmental transformation projects. It targets decision makers, project leaders and information system departments.

MAREVA 2 evaluates an IT project based on an analysis of 2 main criteria:

The method applies all along the project lifecycle and serves as a help to the decision making process: 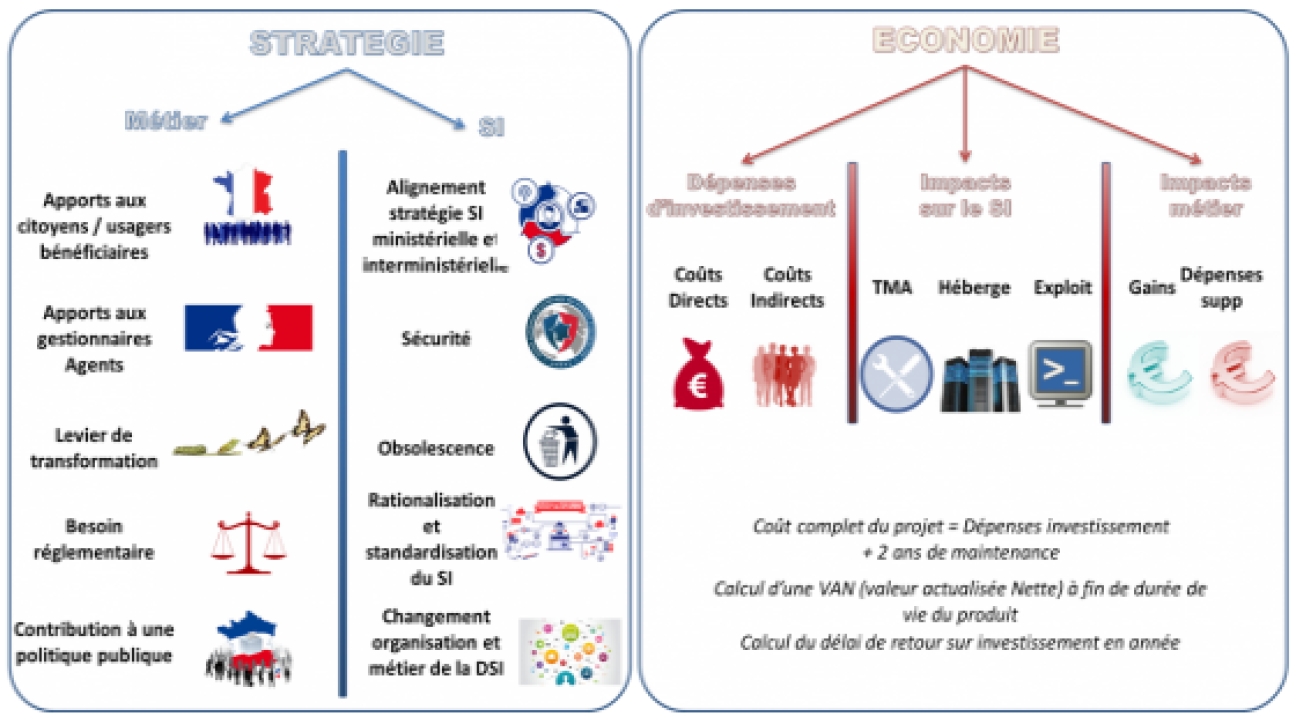 Decision-makers must be able to compare and track the value of projects and prioritize them against the strategic and economic directions of their department.

Decisions to go ahead or stop projects (for projects in difficulty or whose awaited benefits have diverged too much since the framing phases) must be able to be taken on the basis of objective and homogeneous analysis between them.

The sections of MAREVA 2 (addressing a project’s economic profitability, strategy and consequent value creation) are substantially applicable to every single information system project governed by the public authorities. The models are available on the website of the relevant State minister as an MS Excel and an equivalent open office (LibreOffice) tool, divided in three items according to billability, strategy and value perspectives. Those files are designed to combine the easiness of access for the public officer expected to apply it, being as much exhaustive as possible.

The ministry offers multi-level training courses to teach the relevant civil servant on how to manage the procedures and to properly apply the rules in the existent projects.

The first MAREVA brought already a long list of success impacting relevant projects in France for what concerns the assessment and follow-up (cf. a previous article published on Joinup back in 2007). It was specially underlined how the MAREVA approach provides easily readable report to commit teams to concrete objectives and enabling to better manage the project.

From that day, many steps have been achieved. The application of MAREVA has become compulsory for the IT projects lead by the French Ministries and the new approach permits to evaluate various aspects of the projects. The method is already applied before the kick-off so as to minimize the risk of useless activities, optimizing then the efficiency in the use of public budget.

Indeed, all the other aspects of the initial MAREVA approach are still part of the second version. For instance the methodology, that enables to follow-up the value of a project at each stage of its life cycle: beforehand, to contribute to the decision-making process, during the project to better manage it (resources justification, choice between alternatives, corrective actions plan) and afterwards, to contribute to the gained experience.

When the need for a project is already in place, MAREVA 2 makes it possible to compare the value of different scenarios in order to choose the most valuable one. The project usually pursues a general objective (ex: administrative simplification), which needs to be defined in sub-objectives to verify its implementation over time. The results provided by the tool on the strategic value of the project allow to better target the sub-objectives (ex: answer to a regulatory need).

An important aspect of the MAREVA multi-criteria study is that it does not focus on economic profitability exclusively. It can even show that some projects may appear to be unprofitable but are totally justified thanks to their added value for the public sector as well as for the French citizens.

All the big IT projects run by the French public sector (#61, as stated on the public panorama, for a total of 2.5 billion euros of investment committed in the last years for the IT transformation projects) are addressed with MAREVA 2. They represent a budget of nearly 25% of the total yearly IT investments of France (summing up at 200 million € addressed by MAREVA 2).

MAREVA 2 has been conceived in a co-construction mode, gathering inputs form inter-ministerial discussions. This ensures the method reflects and answers the needs of its end-users. In the same philosophy, its implementation on projects brings all the stakeholders (business people, developers, IT exploitation and hosting…) around the table to build a common, shared and transversal understanding of the projects challenges, objectives and scope. This collaborative approach optimise the results produced by the method.

In order to be efficiently spread and used, MAREVA 2 frameworks adopts a threefold composition. It is made of the method in itself, the toolbox, and the organisation that supports it. This organisation relies on training program to raise awareness and build skills around the method (approx.. 500 staff trained), on both IT and business referring persons across the ministries (acting as super-user and first level of support), and on a user club (managed by the DINSIC and acting as second level of support).