George Ciamba was appointed minister for Europe on 14 November 2018. 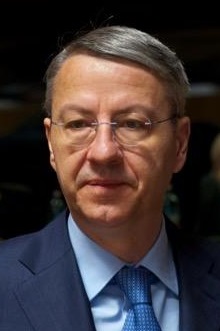 George Ciamba is a career diplomat who has joined the Ministry of Foreign Affairs of Romania in December 1990.

His former portfolio as Secretary of for Bilateral and Strategic Affairs in the Euro-Atlantic Area (from January 2017 to 13 November 2018) comprised a wide range of subjects, from the strategic affairs – including NATO, US, disarmament and nonproliferation, cyber security and minority rights – to the bilateral relations with the EU Member States, candidate countries and regional cooperation formats.

In 2016, as a Special Representative for Economic Diplomacy, he actively contributed to promoting and developing the economic projects that Romania has strategic interests in, as well as to consolidating the inter-institutional relations for the country’s international representation in the economic field.

Prior to that, since November 2012 he served as Secretary of State for European Affairs. In this capacity, he promoted an active participation of Romania at all EU levels and the national contribution to the elaboration of EU policies. He coordinated the sectorial positions expressed in all the configurations of the EU Council and participated in the General Affairs Council (GAC).

Before his appointment as State Secretary, George Ciamba was the ambassador of Romania to the Hellenic Republic. The main objective of his term in Athens was to promote bilateral relations between Romania and Greece as well as their cooperation at EU level. Particular emphasis was placed on the developments of the economic downturn in Greece, as part of the sovereign debt crisis in the EU, as well as the resulting internal political unrest and its implications at national level.

Between July 2003 and January 2005 he served as Secretary of State for Multilateral and subsequently, Global Affairs in the MFA. During this mandate, he coordinated dossiers related to the EU (The Intergovernmental Conference), NATO, the Council of Europe, the UN and other international organizations.

The priorities of his term were promoting Romania’s progress within the enlargement process of the EU, eventually leading to the closing of negotiations at the end of 2004; bringing forward Romania’s active contribution to the debates of the IGC and the future of Europe; advocating  the importance of NATO and EU enlargement towards the South Eastern Europe and their involvement in the democratization and promotion of security in the Black Sea area, a region of strategic importance; the Strategic Partnership with the USA; dealing with the complex developments in Iraq and Middle East as well as contributing to Romania‘s diplomatic strategy in relation with the countries of this region.

Emphasis was put on reflecting the excellent level of political relations in the constant growth of economic relations (investment and trade). Romania’s negotiations for NATO accession were also a priority, especially by a focused dialogue initiative aimed at strengthening the common support within the Romania-Bulgaria-Greece-Turkey quadrilateral format.

Prior to his ambassadorship, he held the position of Deputy Head and Head of the North America Directorate (1997 – 1999), at a key moment in the bilateral relations between Romania and the US: the launching of the Romania-US Strategic Partnership. He was a member of the Governmental Task Force and of the Romanian-USA Action Committee, under the framework of the Center for Strategic and International Studies, a leading Washington-based think-tank, designed for building upon Romania’s comparative advantages (strategic, political and economic) in the bilateral relations with the US.

In 1995 he was Secretary of the Historical Romania-Hungary Reconciliation Working Group that led to the signing of the Base Treaty with Hungary, in 1996.

Between 1991 and 1995, he held various positions in the MFA: desk officer for the USA, for the International Atomic Energy Agency and for nonproliferation.

After graduation in 1990, he joined the Ministry of Foreign Affairs as an attaché and went through all the diplomatic ranks to become Ambassador in November 2004.

In 1999, he was awarded the Romanian Ambassador of the Year by the Romanian Daily “Nine O’clock”. In 2000, he was granted “The National Merit Order – Commander Class”. He was also awarded by the President of the Hellenic Republic the “Order of the Phoenix – Grand Cross Grade”.

He graduated from the School of Electronics Engineering in 1989, holds a post-graduate degree in International Relations from the University of Bucharest and the Romanian MFA, attended the Stanford University’s Program on International Relations and Economics – the Hoover Institution (1992) and participated in the International Visitor Leadership Program on Foreign Policy of the United States Information Agency. He published articles in the field of international relations, with a particular focus on the Strategic Partnership between Romania and the US, within the scope of the Euro-Atlantic integration.

He is fluent in English and French and has some knowledge of Greek. He is married, his wife is a career diplomat and they have one daughter, born in 2003.