Highlights: “AI for the Public Sector”

On Wednesday, the 22nd of June, an impressive Policy Round Table in Brussels formed the culmination of a 5-part conference series on the potential of AI for the benefit of the Public Sector.

The conference was organised by the Interoperability Unit of DG DIGIT and the Commission’s Joint Research Centre (JRC).

During the four online conference webinars between the 7th and 9th of June, a clear question steadily rose out of the discussions: How can the public sector take advantage of the large potential of AI without the risk of loosing the trust of citizens in AI? It is a main theme that travelled in an equal dominant fashion through the minds at the Policy Round Table at the ‘Piazza’ of the Berlaymont Building. 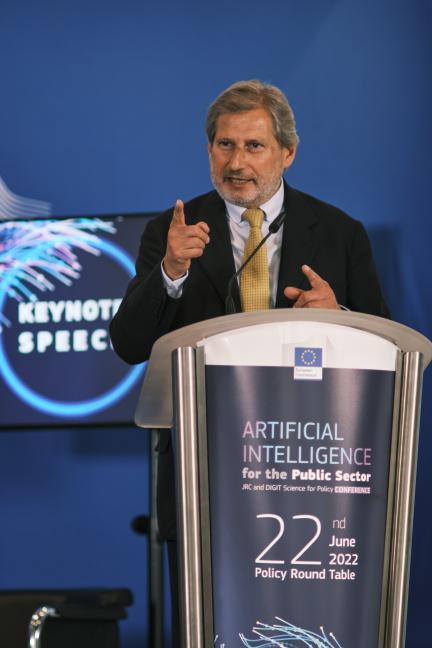 Johannes Hahn, the European Commissioner for Budget and Administration, stressed how important it is to reflect now on the potential of AI: “Artificial Intelligence has become an area of strategic importance for a broader group of people. Not only for its huge economic potential, but it can also benefit our societies manifold, from improved medical care to better education.”

Hahn also provided examples in the way AI can be a gamechanger for public administrations, mentioning among others the potential to better handle large data volumes, the automatization of routine tasks, the acceleration of decision making, and (last but not least) in helping public administrations like the Commission to do more with the same available resources.

Making your way through the AI minefield

The Commissioner was equally aware of the serious potential dangers of AI that are lurking around the corner. He urged for an ethical framework to counter these threats. ‘Using AI for public surveillance on people is something I hope we will never accept in the EU,’ the Commissioner said.

During the Policy Round table, Stephen Quest, the Director-General of the Joint Research Centre told the public that the use of AI by public administrations in the EU is growing significantly, but that the landscape between countries is unequal. “The data that is needed for AI solutions needs to be accessible and discoverable, but this is not always the case.”

The public sector as underestimated innovator

Like the whole conference series, the Round Table was packed with numerous inspiring plans and suggestions to overcome current problems with AI. From investing in digital education for upgrading AI skills of both public administrators as citizens, designing better empirical ways to find the most effective AI solutions, increasing interoperability, to more means for the public sector to professionally procure AI solutions. 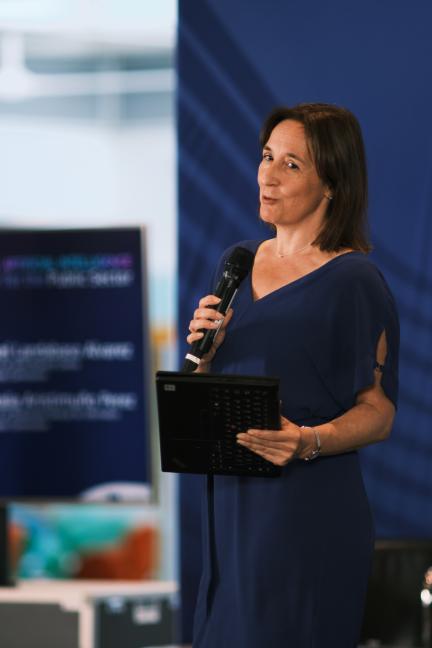 Veronica Gaffey, Director-General DG DIGIT pointed that the public sector and the Commission value very highly the opportunity of using AI. “The use of data and AI represents a potential game changer in the operating methods of the public sector, promising more efficient use of resources and more effective public services. We aim to make the European Commission a digitally enabled organisation and AI and data are strategically at the center of this”, she said.

„We need to create synergies. The European public sector, businesses, academia, researchers need to work together to turn AI into reality for all public administrations. Until recently, innovation and public sector were rather contradictory words. Now this is changing and AI can be the enabler of the innovation in the public sector,” the Director of “Digital Services” in DIGIT Natalia Aristimuno Perez added.

Noticeable in this regard was the daring plan of Digital Flanders to give each of its regional citizens full control of their data by giving every citizen a personal data vault. Using regulatory standards to respond to ethical concerns is something to which the EU has a large responsibility, according to Commissioner Hahn. ‘The Commission’s proposal for an act on AI has the potential to set global standards.’

During the whole conference series, many speakers also stressed how important it is not to underestimate the role of the public sector in AI innovation. ‘Especially, when it comes around setting standards and behaviours, it is often the public administrations who lead, after which the private sector follows’ Commissioner Hahn declared.

The Policy Round Table, just as the four webinars, can be rewatched integrally here.