The Joinup platform plays many roles such as being an online repository of shared and reusable ICT solutions, a collaborative space, an observatory of all things Open Source and eGovernment-related. New enhancements are required in order to keep Joinup in line with the policy needs and to help further improve digital public services for businesses and citizens while assisting Member States in doing so with less effort and costs.

The first steps towards this goal have been taken – by listening to you, the users. The Joinup Team has been meticulously collecting, sorting and categorising all incoming user feedback. Your responses and opinions have set in motion a process that aims to challenge existing Joinup concepts such as its philosophy, visual and user interaction, as well as its technical underpinnings. Your input made one thing clear from the onset: sometimes, you need to judge a book by its cover. Joinup’s user interface (UI) and user experience (UX) was a common denominator in your feedback. 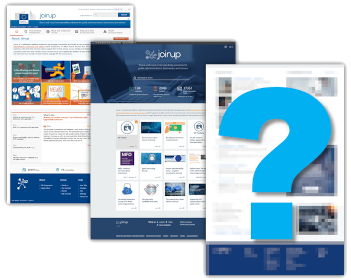 It was now clear where to start from. The Joinup Team launched a UX audit from which valuable feedback and insights were gathered regarding the platform’s current state of human-computer interaction. On top of that, the team sought further input via dedicated virtual meetings, like the recent Joinup User Group Meeting, and arranged related online brainstorming sessions with key Joinup stakeholders.

This page will serve as a space in which all major UI/UX improvement activities will be announced, as they happen on the platform. In order to ensure a smooth transition, and allow user familiarity, these improvements will first be put through a testing phase and showcased to users via Joinup’s Demo environment. As usual, your feedback will be highly appreciated and welcomed during this stage.

We are all in this together.